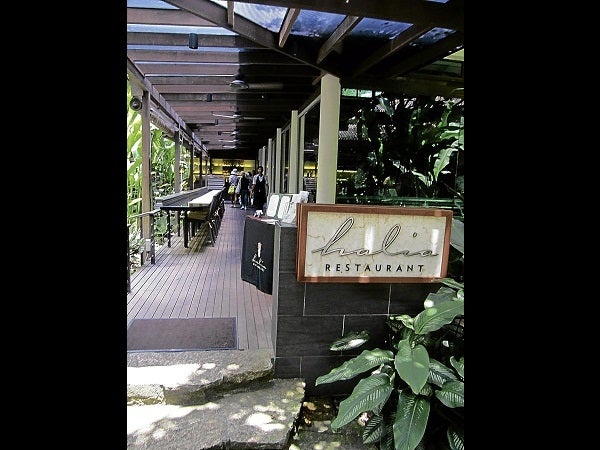 Singapore continues with its quest to elevate dining to an art form. While preserving its multicultural roots, it is open to global influences and trends.

A restaurant that has been attracting discriminating couples is Halia, Malay for ginger. Its cuisine, culled from a “marriage” of European traditions and light Asian flourishes, is “modern yet classical, adventurous yet familiar.”

Located in a lush area of the Singapore Botanic Gardens devoted to ginger, Halia and its nearby special events venue dubbed Villa Halia allow the green outdoors in with their creative use of wood and glass panels. In keeping with its name, ginger varieties have found their way into many of its dishes and beverages.

Halia’s pan-Asian cuisine is the brainchild of French-trained Filipino-Singaporean chef Reynaldo Arriola, whose Filipino father was also born and raised in Singapore. Although he has yet to visit his paternal grandparents’ homeland, Arriola claims to be fond of adobo and sinigang. But he has no plans of including such Pinoy dishes in Halia’s menu soon.

“I still have to learn the (Filipino) culture and language before I even begin to consider expanding our dishes and operations,” he says, when asked why he chose to open a branch of Halia in Hanoi, not in Manila.

Another venue conducive to leisurely and weekend dining is the Marmalade Pantry. At the Bukit Timoh Saddle Club, a short drive away from Singapore’s city center, the restaurant chain (there’s one in upscale Ion Orchard mall downtown) got its name from one of the owners’ pet cats.

Like Halia, one of the Marmalade Pantry’s come-ons, apart from its modern “bistro” cuisine, is its green semi-outdoor location. It also has a wide selection of desserts, including tasty and colorful cupcakes made from various fresh ingredients like shredded coconut, fruits in season and pandan. The best part is, they’re all moderately sweetened to allow the cupcakes’ natural flavors to emerge.

Downtown also offers ideal dining and bar-hopping options for couples. Set against the resplendent Marina Bay waterfront skyline, the Fullerton Bay Hotel’s Lantern has been cited by CNNGO.com as one of the best hotel bars in the world today.

Popular among locals, expats and tourists, including occasional Filipino high-flyers and celebrities, the Lantern offers delectable gourmet tapas and signature cocktails amid a stylish and semi-outdoor poolside setting. The ambiance is made more soothing by guest DJs who play jazz and Cuban beats.

The Salt Grill and Sky Bar, which specializes in contemporary Australian cuisine by celebrity chef Luke Mangan, is also worth checking out. Located on the 56th floor of the same building housing Ion Orchard mall, the restaurant is a virtual glass house with a panoramic view of the garden city.

Its glass roof is covered by a camouflage of off-white stickers shaped like leaves to temper the harsh noonday sun. In a few hours’ time, Salt Grill diners are bound to experience a totally different vibe as Singapore is bathed in the glow of stars above and city lights below.