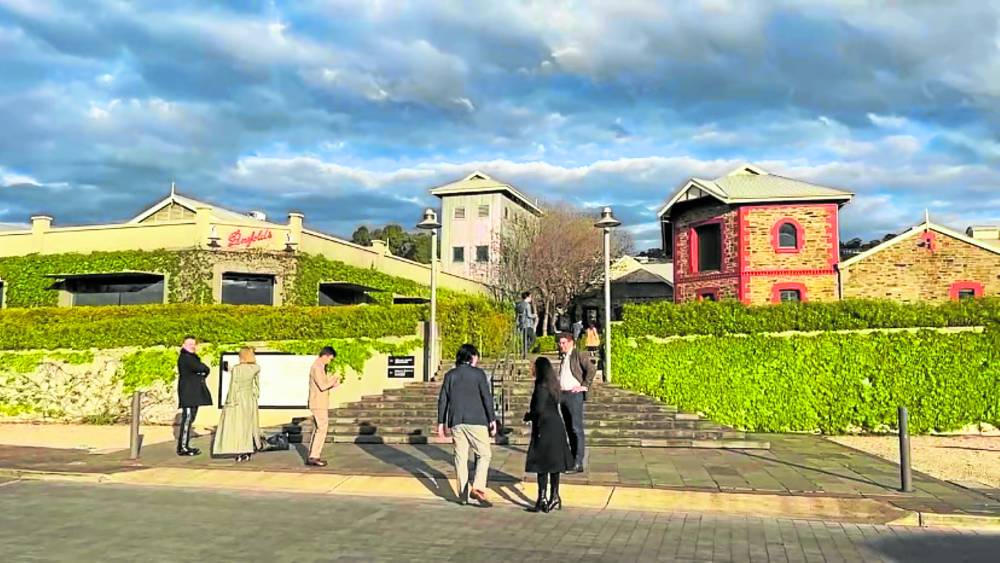 The Penfolds Magill Estate sits in the foothills of Adelaide, Australia.

In Adelaide, a wine master class: Boldness, blending and a wife’s intuition

We touched down in Adelaide for two days of brilliance and balance. The evening started with a drive to the foothills of Adelaide that have become known around the wine world for Grange, the Penfolds red that consistently has collectors and enthusiasts hunting for body, balance and consistency.

The master class with Sam O’Connell of Penfolds was arranged by Bentley Motorcars, whose cars we would be testing the next day. A walk through some extremely historic (and some rather dusty) cellars brought us to an array of wine glasses we would use to journey through the Penfolds range while discussing its history.

It was a history that went from a surprisingly complex but relatively unknown white to the famous Grange, and from a medicinal doctor in the United Kingdom looking to create tonics and elixirs to South Africa (to choose grape vines) to the newly colonized Australia to wines that would end up going back out into the wine enthusiast world.

The story of Penfolds began with the belief that medicinal tonics were the answer to many aches and pains. Dr. Christopher Penfolds and his wife Mary lived in the United Kingdom, and Christopher was a big believer in these types of medicinal wines. They saw growth in this market, but the UK wasn’t the place for wines and Europe already had established big players.

They thought that South Australia, being of the same latitude as the already-established wineries of South Africa, might be a good place to start producing their medicinal wines. They set out on a 127-day sea journey, going via South Africa to choose grape vine cuttings. They dipped these cuttings in beeswax to preserve them, and brought them to what are now called the foothills of Adelaide. Australia was colonized in 1836, and the Penfolds started their journey in 1844, so they were true early adopters.

The first house they built in 1845 was named the Grange cottage, after Mary’s ancestral home in the UK. This cottage was their home, their workshop, and where they would see patients and then sell them the tonics for their maladies, sometimes three times a day, and then possibly for their headaches the next day. Medicinal wines eventually were found to be less than medicinal, but by then wines were already established as enjoyable. It was Mary who had the idea to move from medicinal to commercial “recreational” wines. A hundred years later came the Penfolds’ flagship wine Grange.

Penfolds is known for their strong yet balanced Shiraz reds, in particular the often-mentioned Grange. While we ended up there, we started the four-wine array with a white that was meant to sit alongside the red Grange.

The 2020 Yattarna Chardonnay is a multistate offering, meaning it came from vineyards in different Australian states. It was meant to be, and now is considered, the flagship white of Penfolds.

The winemakers, though, weren’t too sure what they wanted exactly, and went through 144 different trials before they got to the taste they wanted. On the bottle, “Bin 144” is an homage to the trials it took to get to the final style of wine, having gone through different grapes, different vineyards and different blends.

The name Yattarna, an indigenous Australian word, means “little by little,” and is also a nod to how hard it was to find the style that would be worthy of sitting on the same pedestal as Grange. The wine is delicate and elegant, with a rather fine citrus (green apple or lemon zest) note while still having the traditional butteriness and creaminess of Chardonnay.

We moved from the Chardonnay to a set of three Shiraz-based reds. We started with a 2018 Bin 150 Marananga Shiraz that was quite approachable yet is a good example of what Penfolds strives for in character.

From there we tasted a 2019 St. Henri multiregion Shiraz that O’Connell considered a favorite. This wine doesn’t rely on any new oak, and is meant to be somewhat of a counterpoint to the famous Grange. So we moved somewhat from the expected to something that was more unique and expressive and has become quite popular, then we moved to the flagship Grange from 2017.

Grange doesn’t state on this bottle any variety or region, as it is created to reach certain standards and levels based on what the winemakers believe is the ultimate expression of the character. In this case, the 2017 is a rare Grange which used 100-percent Shiraz, which has only happened seven times in around 70 years. The 2017 Grange would most definitely be brought to cellar, and indeed all these wines could benefit from maturing, but they were all hugely enjoyable even when they are young.

Penfolds looks for character but also for consistency, and it achieves this by creating wines that may come from different regions and different varietals, whereas more “old world” European wines may stick strictly to their region or town or vineyard.

This consistency occurs even though seasoned wine enthusiasts would be able to tell the difference in taste for the years while still recognizing the character. What we appreciated most was that there was balance all throughout. The wines all had power, of course, at different levels, and they could all change with age, but they were all approachable as young as they were. There was no real overpowering of oak, which is often the unfortunate case for many other new world wines. Technique is in service to the overall enjoyment of the moment.

The master class of Penfolds can be arranged through the Penfolds Magill Estate, and is a wonderful way to understand and experience all the trials and challenges that have ended up creating one of the world’s most respected wines. It will also will allow you to appreciate wines at different levels and stages other than just the iconic flagships. Wine, O’Connell kept saying, is really about your personal enjoyment than anything else. —Contributed INQ