Escape to (or from) White Beach | Inquirer Lifestyle ❮ ❯ 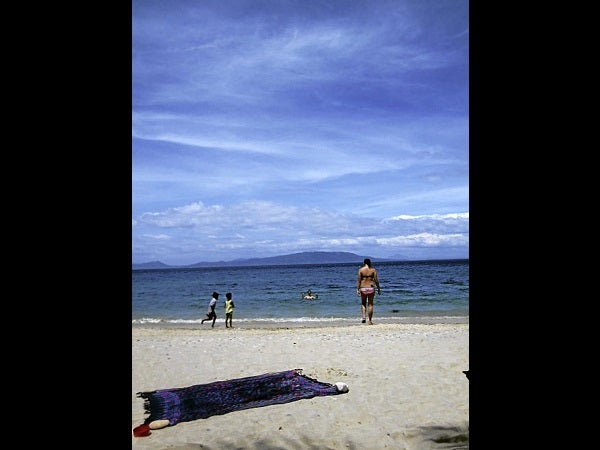 Escape to (or from) White Beach

About six years ago, I wrote a piece on Puerto Galera.  I was in love with a French intern in Tabinay, and my article was peppered with lines like “a sea as blue as Paul Newman’s eyes,” and dreamy voyaging and sap and wanderlust.

I remember hiking to Mangyan Village with this long and exquisite creature, and on the way up stopping to squat upon a rocky precipice, our exchange on solar panels punctuated every now and then by the buzz of chainsaws.

It was April, the height of mania and knocking back plastic mugs of Mindoro Sling (Tanduay rum, Gina’s Mango Nectar, Sunny Orange, Sprite, Grenadine, and calamansi, but versions vary) on White Beach, and I wanted nothing to do with it. By then, waking up sandy and disoriented beneath somebody’s henna booth had long ago lost its appeal.

I’d regularly been going to Tabinay, a quiet portion of the mainland, with family members since I was little, but it was only on my last summer of college, in the early 2000s, that I found myself disgorged upon the expanse of white sand and wooden bars and vendors of yarn anklets that is White Beach.

I was among a pack of people who believed themselves Rastafarians, and during the day we battled waves and went around cliffs and claimed for ourselves spots of spectacular and solitary nature to spew out discourses on important matters such as the origins of “4.20.”

At night we pitched tents and dug ourselves into holes and crawled to and fro Coco Aroma, a jungly bar near the end of the beach, in exaggerated praise and awe of the night sky and all that it is. It was the last time White Beach would allow tent pitching on the sand, and the last time the beach would be free from police patrols and insane crowds in the summer.

I would return to the island 10 or 15 more times, sometimes choosing the quietest of seasons, sometimes smack in the middle of tourist free-for-alls.  At times I crossed the rock barrier at the end of the beach to stay at resorts in Tamaraw, where rooms are slightly more expensive but the air less frenzied. Sometimes I rented out Coco Aroma’s attic for P200 a night, where your head hits the ceiling when you try to sit up. And sometimes I went along on trips to Sabang, a small island that resembles Makati Avenue at night, except it’s surrounded by water.

Now, most people my age have moved on to more advanced levels of Beach, but I’ve always kept my kinship with Puerto Galera. Its smell and colors, Bob Marley soundtracks, and cold bottles of Pale Pilsen drank upon awry wooden stools are now all synonymous to summer, and the efficient discharge of city toxins without ever worrying about paying too much for anything.

This year, I convinced my cousins to take the two-hour bus to the Batangas pier and ride the hour-and-a-half ferry to Puerto Galera. We agreed to avoid White Beach at all costs, and opted for a quiet little resort in Talipanan near Tamaraw beach.

As usual, the Batangas port was filled with people trying too hard to be helpful, but I’d grown used to them and instead of lashing out, now just allowed myself to be steered towards different windows for whatever transaction. The ferry ride was nice as always, except the part where they unfurled plastic sheets to keep passengers from getting wet. Then it got seriously stuffy and children began to look wildly around for places to hurl. Thankfully, we arrived at our destination without incident.

Talipanan is an unremarkable area that is just starting to develop, and we were content. Apart from the occasional spiel by vendors/masseuses/enthusiastic tour guides, we mostly had the beach to ourselves. We switched from languishing on the sand with our books and oils, and venturing into the ocean to flop around and lie on our backs. We spent a glorious afternoon baking under the sun and munching on buko meat and trying to keep our mats from flying off the sand. By the second day, we were on a tricycle headed towards White Beach for P20 each.

The best thing about Puerto Galera is that there is always a way to escape from the madness—or to choose to go towards it. There are always peaceful coves and niches of space you can carve out for yourself, and jungles and mountains and side streets to retreat to. The island is filled with bays and smaller islands and stretches of sand and sea.  And should you decide you’re done with meditating, there is always crazy ol’ White Beach to return to, with its pitchers of Mindoro Sling, packs of vendors foisting their balut at you, and the motley yet all-too-familiar crowd of tourists, foreigners, locals, dogs, and legends.

By the time we were done with our Mindoro Sling, bars on the beach were starting to crank up their techno, and excited, mostly younger groups were beginning to flock towards the noise. We took this as our cue to hail a trike back to Talipanan.

As I had already said, waking up on the sand—either from extreme drunkenness, or just to avoid having to pay for accommodations—is so early 2000s.

Note: P1,000 is no longer enough to fund a weekend, as the common breakdown—P500 for round trip transportation, P200 for accommodation, the rest for beer—no longer holds.  Also, the port has sadly found ways to charge extra for things never properly explained, but rates remain reasonable and far from Boracay-esque.