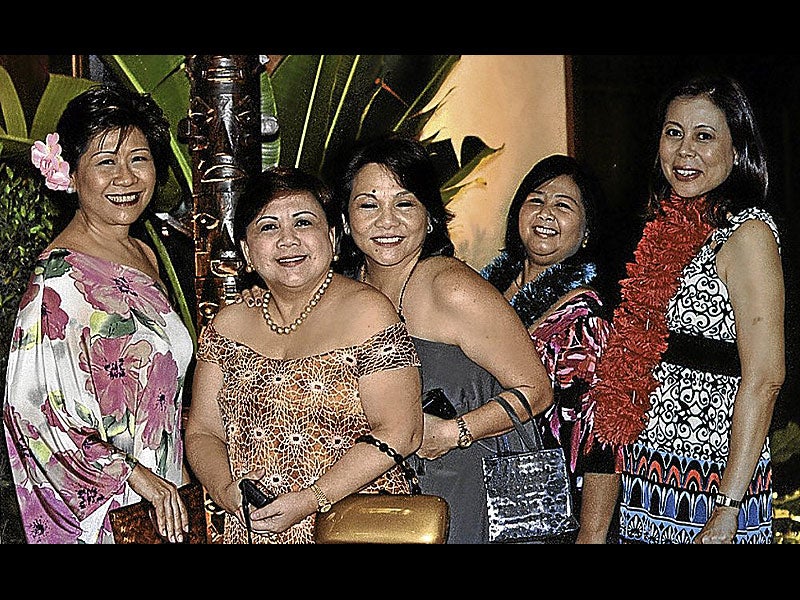 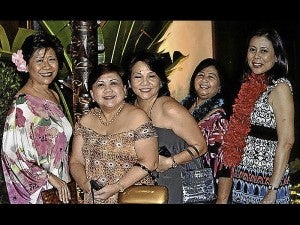 Coring Velez Lienaw planned a bash for her 60th birthday to the last detail. About a year ago she started with the invitations. Being an artist, she hand-painted every flip with an exotic flower. Many of them were actually blooms in her garden where she lives in the idyllic mountain barrio of Sirao.

She must have painted dozens, judging from the throng of friends and relations who showed up at Salon de España of Casino Español de Cebu. Most of them had received text and phone missives two months in advance asking them to save the day and time for Coring.

The roster read like Cebu’s crème de la crème from the old-guard high society, a low-key enclave that is publicity shy, save for a grand occasion. And a party tossed by Coring Lienaw was an occasion to emerge in full force.

All of the guests—a 100 percent!—came in the requested Hawaiian floral prints, making it all quite a splash of color. The celebrator herself looked great, surrounded by her ever supportive husband Roberto “Jing-Jing” Lienaw, their son Hans Lienaw and his wife Gilda, who is expecting her third baby. 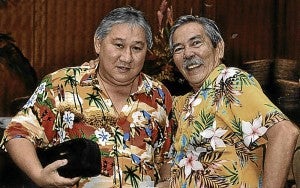 Coring’s elder sister, Paching Velez, had come all the way from New York City and popped up a couple of days before the party, which surprised Coring no end. In on the secret was younger sis Marilu Velez, who came to the party with daughter Stephanie Gruet and her Singaporean fiance, Darrel Chong.

The festivity started with a solemn Mass, followed by dinner and dancing. The setting resembled an elaborate luau with blooming shrubs at the foyer, and masses of flowers in the ballroom. Leis of all colors dripped from chandeliers, hung by Coring herself who is agile and spry with a ladder.

Table runners depicted gumamelas, frangipani, bird of paradise, red ginger torches, and more. A well-selected menu was served on two long buffet tables, and you had to put the food on buri baskets lined with smoked banana leaves.

“I beg your kind indulgence,” said Coring over the sound system at a given moment. She had a brief Powerpoint presentation about her life, from birth to the present, with comprehensive coverage of those whose lives she has touched as well as those who have figured in hers. A hum of nostalgia rippled through the assemblage when the old Velez mansion at “El Retiro” came into view. It was atop a hill in Lahug, fondly called ang bungtod. That is where Coring grew up with her parents, sisters, uncles, aunts, cousins and more presided by her paternal grandmother, Doña Esperanza “Inday” Velez. The area is now occupied by the massive Mormon temple, but the calachuchi trees remain.

Aside from painting like a true artist, Coring is also a wide  reader, and, as a consequence, is gifted with a literary streak. She has written two volumes, illustrated with a wealth of photos, about her memories. They are as candid as they are evocative.

Coring does not intend them for publication. I have been honored and privileged to read them. Coring wants them to be a legacy for her descendants (so far two grandsons, and another on the way) who will be in possession of unique and important documentation of life in Cebu, as it was and will never be.

The party went into high gear when the Renaissance Band began to blare hits of the ’50s, ’60s and ’70s. Every yuppie present worth his salt took to the dance floor, to do every step from yonder younger days. Rock ‘n’ roll, anyone? The twist and cha-cha, too. But most of all, it was anything goes.

Days after, at El Comedor at Casino Español, Myra Gonzalez, Margot Larrañaga and Chinggay Utzurrum gathered Coring, Paching and Marilu to relive that happy night. Coring brought about 400 photos, some of which we have here today.