Sir, It's Your Religion that Needs to Stay in the Closet | Lifestyle.INQ ❮ ❯ 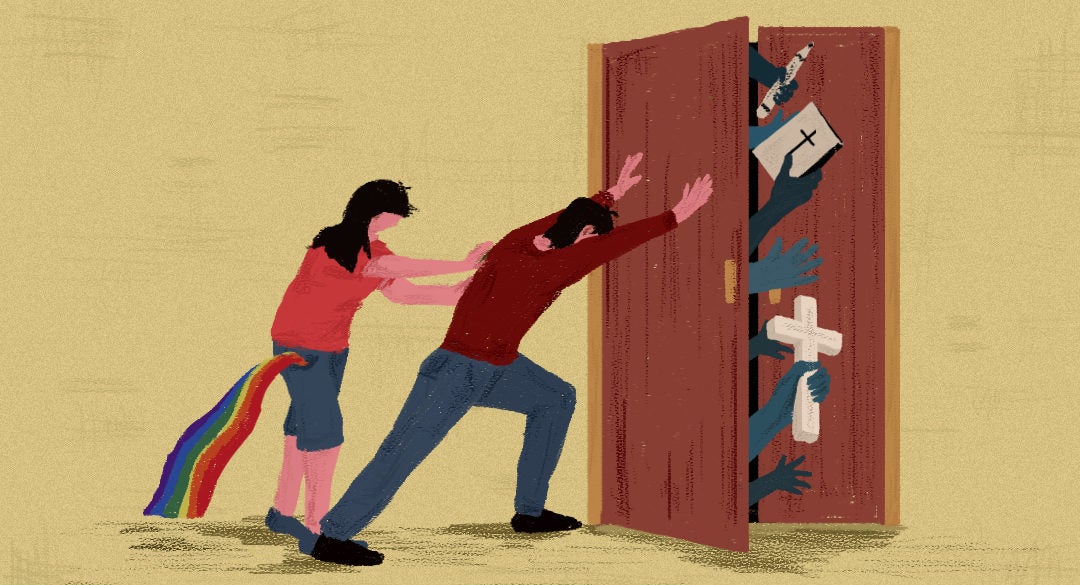 Sir, It’s Your Religion that Needs to Stay in the Closet

By now, you’ve probably heard of the heterosexual rights bill that Congressman Bienvenido Abante recently proposed. It’s so funny that it might sound crazy to call it dangerous, but we’ve elected a lot of jokes, so at this point it doesn’t seem farfetched to assume that a bill as ludicrous as this might just become law.

The bill is obviously a reaction to the growing awareness and acceptance of the LGBT+ community in the Philippines. The media has been quite progressive in their coverage of LGBT+ issues and depiction of queer Filipinos, save for a few outliers like Quiboloy’s SMNI, who not only continues to red-tag LGBT+ activists but has said being LGBT+ is kalokohan ni Satanas. (Save that video because Quiboloy is gaslighting us recently with claims that they have been very accepting of LGBT+ people.)

What I find particularly odious about the anti-LGBT+ arguments from the likes of Congressman Abante (who is also a Baptist pastor) and Quiboloy is the manner they wave their religion in front of us, as if their right to practice their religions entitles them to establish a Christofascist regime in the Philippines.

I mean, sure, go structure your life around your beliefs for the thrill of it, but don’t tell me (and everybody else who doesn’t subscribe to your religion) that a book that condones rape, infanticide, genocide, and slavery must be the moral foundation of our society.

The bill the congressman proposed laughably begins with: “God created man in his own image and created male and female only [Genesis 1.27] and gave the decree of procreation to a male and female only [Genesis 1:28]”, as if pull quotes from a prescientific text passed down thousands of years ago by ancient humans who thought talking snakes and donkeys are real are even worth the consideration, in the face of solid, well-established science.

(There are about 1,500 species where homosexual and bisexual behavior exists, for one; and two, there is scientific consensus on evolution, unlike what creationists would like you to believe.)

I think that it’s time to agree that religious arguments are not and must not be held with the same regard as science-based arguments. LGBT+ people exist and are natural, despite what zealots would love to believe. Nobody chooses to be born queer, much the same way nobody is born Christian: the government should prioritize protecting us over the feelings of religious folk.

We are not demanding special rights. Unlike what bigots would like everyone to believe, LGBT+ people are not pushing for legislation that seeks to take away the right to marriage, have children, and everything else that heterosexual people already enjoy because of their SOGIESC (sexual orientation, gender identity, gender expression, and sexual characteristics) –– we only wish to expand the definitions to include us.

Historian and philosopher Yuval Noah Harari makes an excellent point when he said:

“Every religion, ideology and creed has its shadow, and no matter which creed you follow you should acknowledge your shadow and avoid the naïve reassurance that ‘it cannot happen to us’. Secular science has at least one big advantage over most traditional religions, namely that it is not terrified of its shadow, and it is in principle willing to admit its mistakes and blind spots. If you believe in an absolute truth revealed by a transcendent power, you cannot allow yourself to admit any error – for that would nullify your whole story. But if you believe in a quest for truth by fallible humans, admitting blunders is an inherent part of the game.”

I advocate that we should not only push for LGBT+ rights, but also simultaneously, consistently, and doggedly push against this insistent attempt of religious zealots to establish their beliefs as the law of the land. Yes, we  should respect people who subscribe to a particular religion, but at the same time we must be free to pick apart their belief systems, most especially when they become focal arguments for legislation, as what Congressman Abante is doing.

As it’s said: people have rights; ideas don’t. We must be able to call out the horrible parts of Christianity or Islam or any other belief system that seeks to oppress and obliterate people like us. Because frankly? There’s a lot that we refuse to talk about.

It’s a good thing to remember that the leaps of human progress did not happen because of religion; as we all know, it had often been the case that religion went against scientists when their discoveries went against religious beliefs (remember Galileo?)

Also we’ve seen how religion and religious institutions have either encouraged or covered up some of their most appalling crimes, which include child abuses, sex trafficking, colonization, mass murders, and corruption.

It isn’t through reading the Bible that we understood about the solar system, gravity, the speed of light, nuclear fission, genetics, chromosomes, and many other things we consider as facts. Because of the scientific method and its ability to accurately explain phenomena, people’s reading of ancient purportedly-holy texts now adjust to fit the facts that come about through scientific research, like a bumbling man chasing after a speeding car. It doesn’t go the other way: science, in its pursuit of facts, does not adjust to religious beliefs. Often, it quashes it.

At the end of the day, what gives me relief is that society will likely and largely change its opinion on LGBT+ rights soon enough: generational shifts have in many instances resulted in the death of foul beliefs. The Philippines is due for its own age of enlightenment, leaving behind people like Congressman Abante in the dark ages. Stay ashy.