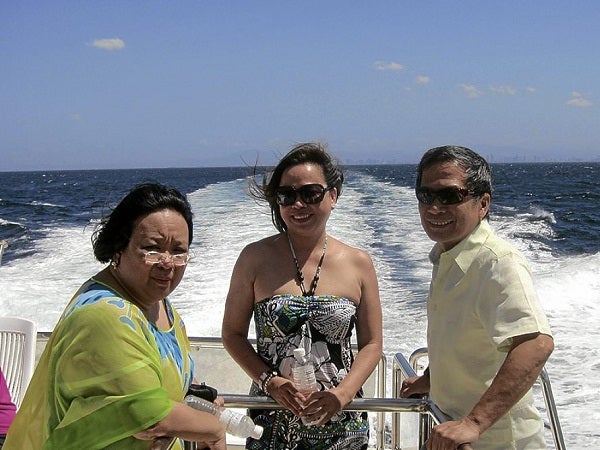 I don’t even remember the last time I danced this much,” a girl friend said, in between huffing and puffing. Me, too. Must have been in the ’80s and the ’90s, we all said, but then we also went further back in time, to the ’70s or even the ’60s, when the band named Daddy Cool struck the irresistible disco hits of those eras.

Who were we to play coy? (Do the twist? We were still in school when everybody was doing the twist, not quite partying yet, but hey, we were already around in that era. No denying that.)

About four weekends ago, a bunch of friends—very busy people, really—put their hectic schedules on hold, hopped on a yacht and sailed to Batangas, to spend the weekend in the grand nature sprawl that is Pico de Loro, just bonding, eating, swimming—and dancing.

And all this for the love of Nes Jardin.  After all, the former president of the Cultural Center of the Philippines (CCP) is turning 60 only once—and is happily proclaiming it. Nes celebrates his birthday with friends every five years, and last March 3 was the fifth year from the time he marked his birthday at a dinner at Mandarin’s Tivoli hosted by good friend Nedy Tantoco, Rustan’s president.

From his long stint in the ’80s at the helm of Ballet Philippines (with dance icon Alice Reyes) to his recent term as president of the Cultural Center of the Philippines, Nes has not only made a difference in the culture and arts scene; his long CCP tenure had also been one of stability, collaboration with various sectors and many milestones.

In a quarreling sector like the culture scene, he was able to work with practically everyone; he didn’t make enemies, but instead gained friends and expanded the network of support for CCP.

It was no surprise, therefore, that friends would readily mark his birthday on their calendar. This year, way before March 3, Nes already alerted his good friends to keep the first Saturday of March open for a swing to Pico de Loro where his friend of many decades, Betty Sy, would be hosting our stay.

His friends promptly gathered early Saturday morning at the dock in MOA, raring to get awakened and revived by the sea air. As soon as the yacht set sail, Italian Ambassador Luca Fornari and his chic wife Silvana laid themselves out in the open deck to bathe in the sun while we Pinoys, you guessed it, sought cover from the scorching sun. But it was glorious weather—enjoyed with even more glorious company.

Also there were Nes’ friends Wally Baynes, and Dave and Mia Kauffman with their tiny brood. Dave is one hunk of a father I’ve seen who cradles in his beefy arm his and Mia’s newborn daughter, to bottlefeed her, at mealtimes. (This must be in between Mia’s breastfeeding.) The father-daughter sight is so (equal-gender) now—must be the Madonna and Child version of this postmodern era.

Betty Sy and sister Tessie Sy-Coson welcomed the party at Pico de Loro, the fast-moving coastal development of SM in Nasugbu, Batangas. It was surprising to see a sizable weekend community already forming. It has been quite a transformation since the last time we were there years ago, when its beach club was newly launched.

The mid-rise condominiums already have a good occupancy—evident from the vehicles filling up the parking slots. The development has a country club with food and beverage outlets, amenities such as a beautifully designed swimming pool, tennis court.

The Pico de Loro Hotel has well-appointed rooms, with balconies where you can sit back and enjoy the view of the expansive lake, the rest of the concrete development, and the natural terrain beyond it.

But the strong draw is the Hamilo Coast with its 13 coves, which must be the largest coastal development in Batangas. Pico de Loro settlers love to take the boat ride to any of these coves and spend the day there, in blissful solitude, swimming on the beach, snorkeling or doing other water sports, or just sleeping on a hammock under the coconut tree.

Sleeping on a hammock under the tree—that’s one thing that hasn’t been on my to-do list for a long time. After a bad-sleep Friday, I did just that the moment the group docked in Santelmo cove, one of the lovely beachfronts in the Hamilo Coast. While everyone snacked and chatted in the sand, under a canopy of trees, I had a good nap, a prelude to wading in the waters at sundown.

Back in the beach club, for dinner, the main dining hall was decked in drop-dead glamour white. The walls and high ceilings were covered in gossamer ecru muslin lined with capiz shells. Since all of Nes’ guests were asked to come in white for the dinner, the scene was simply elegant minimalism, with the candles at the table centerpieces providing the glitter.

Even the buffet spread blended with the stark white composition—except for our favorite, the lechon.  Aside from the roasted pig whose burnished brown color stood out in the all-white canvas that was the dining hall, also a hit was the halo-halo station.

The Italian ambassador and his wife aren’t only so attached to the Philippines, they’re also among the best promoters you could have for the country. They’ve been all over the islands, from Bohol (which they love for the diving and the history) to Palawan. Fornari told us about how he was told by other Italians, particularly Italian missionaries and priests, and businessmen, based all over the country, how conditions have improved, particularly in doing business. The bureaucratic red tape and corrupt practices have been reduced at least.

It shouldn’t be surprising if the couple would choose to spend part of their retirement years in the Philippines.

After dinner, Betty had everyone trooping up to the Brissa Bar on the roofdeck for some burning-of-the-lechon calories dancing to the retro sounds of Daddy Cool. This turned out to be some letting-your-hair-down till way past midnight. Everybody shook his bootie, including acclaimed filmmaker-designer Loy Arcenas who was the first to hop onto the line dancing; everyone, except museum director Barns. It warmed your heart to see Tessie Sy-Coson—on the Forbes list of power women—unwind and dance. Very rare moment.

We would learn later that the day before we left for Pico de Loro, Nes resigned as head of Cinemalaya, the indie film body he helped steer to mainstream success. But not many knew, not even media—that was typical of Nes not to draw attention to himself.

With or without Cinemalaya, anyway, Nes, on his 60th birthday, was given a very precious gift by his friends—the gift of time.  They chucked their toxic scheds to be with him.

Over at Onstage Greenbelt, we enjoyed Repertory’s musical “Jekyll & Hyde” (Michael Williams and Cris Villonco) one Saturday evening, and that same evening, after the performance, we witnessed how these exceptional theater artists have a gift, other than their artistry, and that’s the gift of remembrance.

Repertory stalwart Joy Virata (who’s doing “Care Divas” in April, by the way) strode up the stage to announce that Repertory is marking its 45th year by paying tribute to its great founder “Bibot” Amador and its great director and actress Baby Barredo. (Bibot’s birth anniversary was last February 7.)

Joy called a surprised and very touched Barredo onstage. Baby, even on the impulse of the moment, displayed a performance-worthy impulse. She spoke words of remembrance and gratitude, sang a few notes from the musicals so associated with her, and one by one, the men of Rep (then and now) emerged onstage to sing to her—from Audie Gemora and  Miguel Faustmann to Freddie Santos. They all remembered how Repertory changed and shaped their lives, and were all there to mark that remembrance.

To end the tribute, Baby enjoined everyone, who had been and continue to be part of Repertory, in whatever capacity, to hop onstage and sing. The theater was almost full.  When everyone did go onstage, including “Miss Saigon’s” Leo Valdez and devoted publicist Toots Tolentino, the theater was only half-filled. That proved how many considered Rep to be a part of their lives.

I remember how Bibot loved to recall how they began at Insular Life building. They would perform to an audience of five, one of them Bibot’s driver.