Gazing upon the face of God | Inquirer Lifestyle 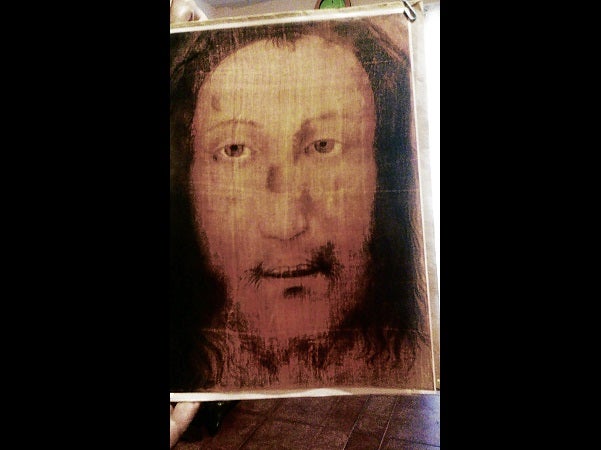 Gazing upon the face of God

High up on an altar, in the chapel of a small convent tucked away in the hills about two hours away from Rome, may be the greatest treasure of all Christendom: the Manopello, also known as the Face of God.

Of course, I first heard about it from H.E., my ninang, Ambassador Mercy T. as these things always find their way to her.

It was her first visit back as Ambassador to the Holy See, and she had brought what seemed to be negatives of a battered face of Jesus.

We went to 168 to buy frames, and she immediately had Minetta Ayala look for someone to have it made into stoles for priests.

With my interior eyebrows raised so high, I would look on her sitting on the edge of the bed, like a wet puppy dog, holding on to the frame, her lap soaked in tears as she beheld His face.

Maybe because of my media background (and arrogance), there is always a little reserve of skepticism lurking within. But I dutifully accepted what she offered: the frame for the outside altar, and the negative which hangs on my bedroom wall. So He looks on me now as I tuldok away.

I went to Rome in October for a series of speaking engagements on Lipa, and the day I arrived she wanted to drag me to Manopello. Puhleeze. Exchoose me! I had two talks the next day and just wanted to putter around her flat. Hello, she and Josie Bantug—the third member of our musketeer set—went! (two hours going, two hours return, and of course, the in between). My gooseneck. That’s how happy they were to see me. Haaay.

I didn’t mind being alone, as being an only child makes me revel in silence, so in those wonderful soft and floppy Qatar pajamas, I prowled around the flat, checking on books Josie had.

I found something: a book on Guadalupe by Paul Badde, a German journalist. I brought it to bed and was about to read it, when I thought that it would perhaps be better to check out the new book the Lipa Commission had printed, just in case my audience asked for more details on the many other miracles of Lipa.

So I stuck the Guadalupe book into the recesses of the bedside table, and there it stayed until the day before I left.

No such things as accidents

I had been in misery from the cold and the pain in my arm from a hospital accident, and had a panic attack. Good grief! Those things are terrible pala! I looked in the bedside drawer for a paper bag to breathe in when I saw the Guadalupe book. I seized it and tried to read as much as I could, not just because I wanted to stave off the attack, but also because I knew Josie wouldn’t let me bring it home.

I was stunned. Badde was a well-known journalist. A fallen-away Catholic, he overheard a train conversation between two men regarding a place of great peace: Medjugorje. Of course, in a series of “no such things as accidents,” he was called by Mama Mary, who always, always leads us to her son Jesus.

I was blown away by the research and years he had spent on it. (By the way, he eventually became one of John Paul II’s correspondents, and was with him at the canonization rites of Juan Diego in Mexico.)

But what shocked me was the fact that he discovered that the original Guadalupe banner given to Count Andrea Doria during the Battle of Lepanto was still in existence. Badde tracked it down to a small convent, but before finding it, chanced upon this other convent with a poorly-lit gossamer-like net of a battered face of Jesus.

All breathless, I told Mercy and Josie that they were missing the point! That they should instead look for the convent that housed the Lepanto banner.

When I got home, I immediately searched my Kindle to see if Amazon had the Guadalupe book. What came up was “The Face of God” by Paul Badde.

I bought it, I read it and realized. Jesus wants to show His face to the Filipino people. Mercy is not an accident. The fact that the Philippine ambassador met Him at the convent and was given firsthand knowledge to bring to her people is part of the plan.

I immediately called Neil and Jane Villarito of ABBA travel to tell them of this place of pilgrimage that no one knew of, and that Jesus had plans for us. To my great surprise, Jane said they had been told of this by Msgr. Cris Garcia of Cebu and had already brought the first batch of Pinoy pilgrims there!

There is a small museum now in the rear part of the convent with facts and scientific studies on what is considered the Sudarium, the cloth that covered the face of God. When matched with the Shroud of Turin, all wounds and marks of blood match perfectly.

You can order the book from Amazon and even upload it on your tablet or computer. And to those who will attend the canonization rites of Pedro Calungsod, go to Manopello.

We are an important part of the plan.