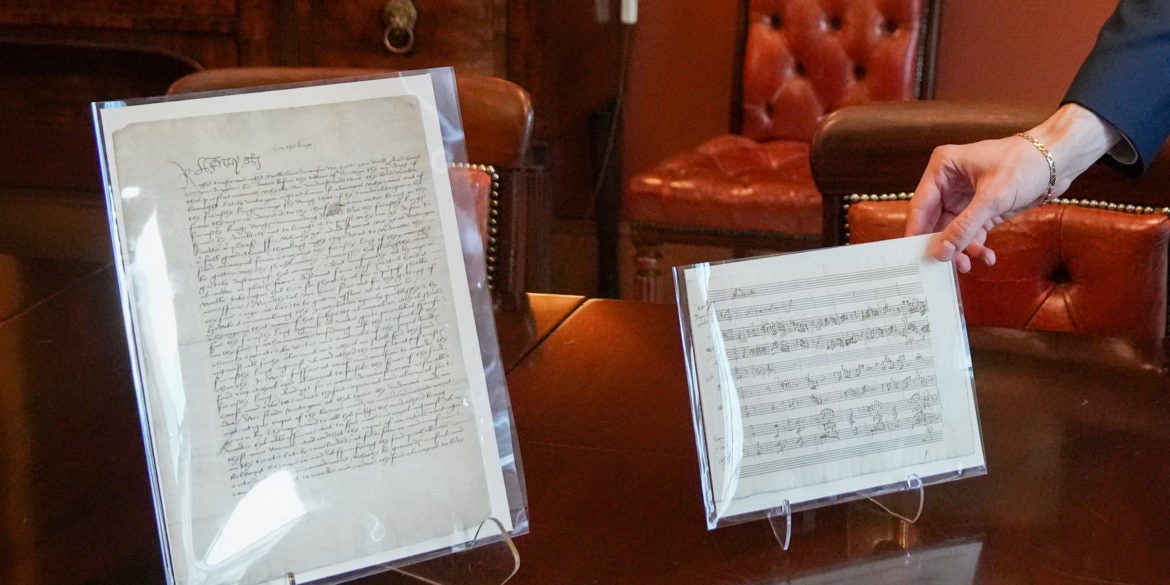 A person holds a rare signed letter from King Henry VIII to his Lieutenant-General in France before the English victory at the Battle of the Spurs and autograph music manuscript by Wolfgang Amadeus Mozart, at Christie's in London, Britain, on December 7, 2022. REUTERS/Maja Smiejkowska

LONDON — A military letter from King Henry VIII and a sheet of music written in Mozart’s own hand at the age of 17 are among lots being offered at auction house Christie’s “Valuable Books and Manuscripts” sale in London next week.

Written in July 1513 – a month before the English victory at the Battle of the Spurs, Henry’s letter to his lieutenant-general in France calls on him to capture the town of Thérouanne and recruit German mercenaries fighting for the French to come to fight for the English.

“Whereas we do occasionally see Henry VIII letters coming up, what’s particularly rare about this one is that it’s a campaign letter, it’s about war, it’s about his strategy,” Mark Wiltshire, a specialist in the books and manuscripts department at Christie’s London, told Reuters.

“It’s about him as a sort of Machiavellian figure trying to work out exactly the best way of defeating his opposition.”

Also on offer at the December 14 auction is an autograph music manuscript written by Mozart in 1773 when he was living in Salzburg, to celebrate a family friend’s graduation from university.

The sheet of music, which features the opening 15 bars of the second movement of the Serenade in D major for orchestra, is the highlight among a collection of music lots, including autograph letters by composers Felix Mendelssohn, Hector Berlioz and Johannes Brahms.

“There’s always great excitement when anything like this from Mozart comes up,” Wiltshire said.