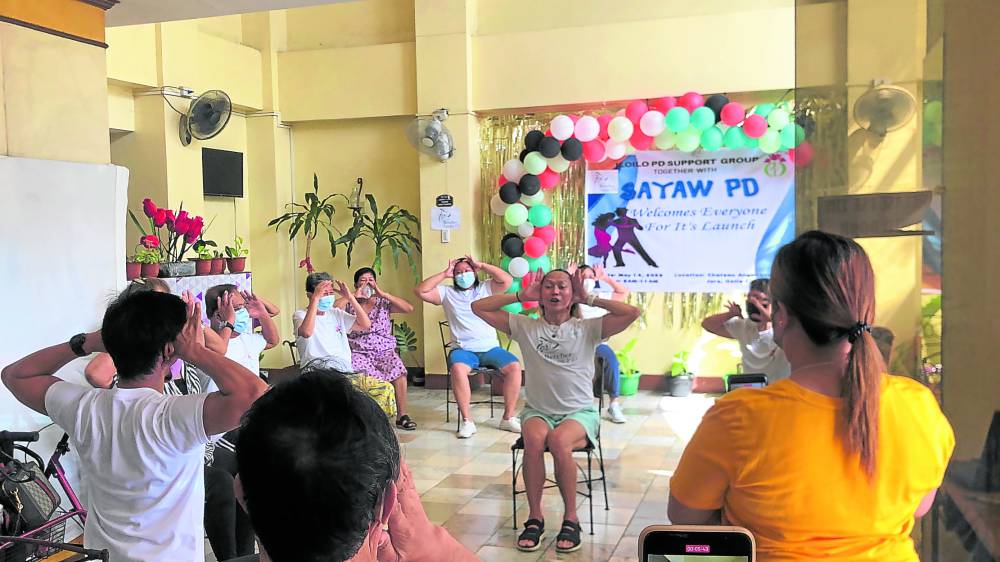 Sitting in a chair, choreographer Novy Bereber gracefully unfurled his arms and swayed them, inviting the audience to imagine themselves as a tree. As he circled his wrists and extended his arms, he told the viewers to feel as if they were branches spreading out into space and bearing imaginary fruits.

Bereber explained that the teacher must be creative in working with persons with Parkinson’s disease (PD). “They are treated like normal people or like dancers in a class. The words ‘exercise’ and ‘therapy’ are avoided. You feed them with images instead of commands.”

The online class was streamed from the West Visayas State University Cultural Center in Iloilo City. He took time off from rehearsals for the grand launch of a fundraising concert for Sayaw PD, Dance for Parkinson’s. Since 2020, the site has established a cult following on Facebook and Zoom. The online classes began in Sydney, where he was based for nearly two decades. Bereber recently returned to his roots in Iloilo to establish Sayaw PD’s home base.

His mission is to raise funds to build a small community center, with a studio and PWD facilities. The goal of this hub is to educate people about Parkinson’s disease and to train teachers for PD- specific dance classes.

Parkinson’s disease is the gradual worsening of movements due to the degeneration of cells in the nervous system. It is manifested by quivering of the joints and head, balance difficulties and slowness in walking.

Contrary to misconceptions that patients risk falling in movement classes, studies have shown that PD-specific dance classes address symptoms by stimulating the mind through learning new steps, responding to music and coordinating the body. A regular session of three times a week helps to improve balance, cognition and motor skills. Bereber’s thrust is to enable the patients to enjoy dance and socialize with others to build self-esteem and prevent depression.

His foray into PD-specific dance classes was the climax of a career as a dancer and choreographer.

After performing with Ballet Manila and Ballet Philippines, he evolved into a choreographer for events at the Cultural Center of the Philippines. He has had extensive experience dancing overseas, and choreographed the Mardi Gras closing party in Sydney in 2011.

To fulfill his ultimate dream of performing at the Sydney Opera House, Bereber returned to the stage as a dancer in “The King and I” with Lou Diamond Philips and Jason Scott Lee. One day, he realized that he could no longer keep up with the younger dancers, and wanted out. A sign at the opera house invited participants to a teacher training program for Parkinson’s disease.

“On the first day of the workshop, I felt a slap on my face. Here I was complaining, and there were people who didn’t enjoy quality of life because of their disability. I felt this was my calling,” he said.

Bereber trained in Australia and advanced his knowledge at the Mark Morris Dance Group in New York. He trained under David Leventhal, program director and founding teacher of Dance for PD.

In an interview, Leventhal explained that the elements that dancers work on to achieve maximum performance are likewise valuable for people with PD. He cited shifting weight, finding balance, being able to express ideas and stories with the body, coordinating different movements at the same time, feeling various movement qualities, and integrating music as the motivation for the movement may seem challenging for people with PD, but are important for them to work on.

“Dance packages these into an enjoyable experience, so you don’t feel as if you are exercising,” said Leventhal.

Bereber has also benefited from the healing effects of Dance for PD on himself. “I have learned to be more sympathetic. Yet these patients should be treated with respect like normal adults, and not spoon-fed like children. When they see your good intentions, they will follow you.”

He recalled that during the lockdown in Sydney, his online classes in Sayaw PD supported his mental health. “I had my personal issues, as well. I didn’t know who I was. Through SayawPD, I regained my identity. If it helped me to find myself, I hope that this program would help others to believe in themselves, too.”