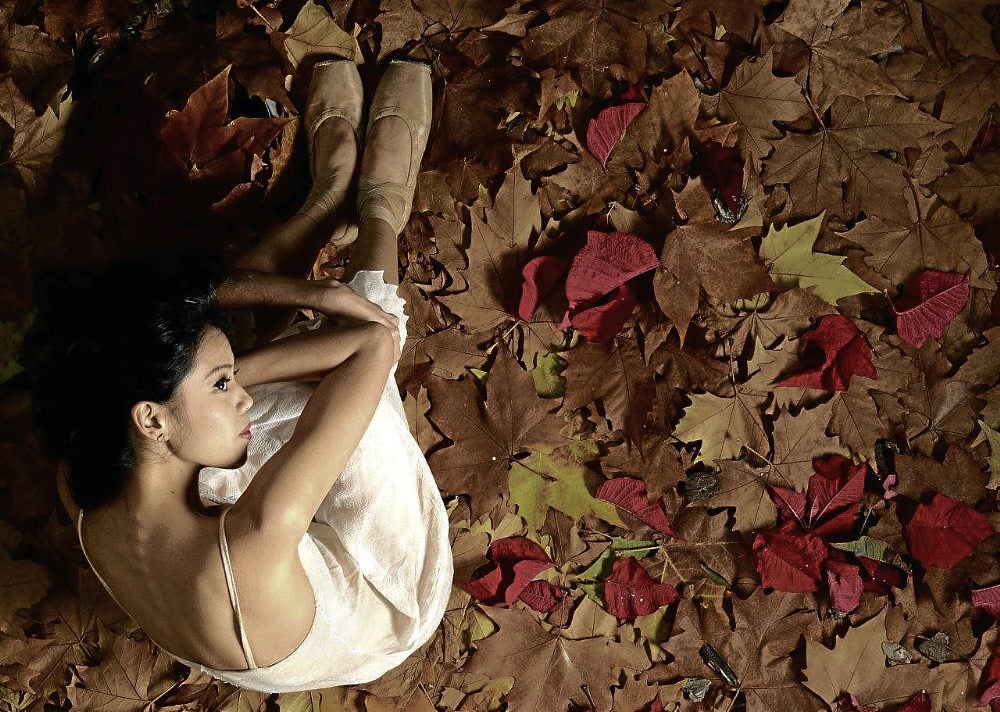 David Campos, Spanish-Catalan  choreographer, and Irene Sabas, Filipina partner and  codirector  of their  exceptional company,  descended  into the local dance world, and  transformed dance idiom into a new language, fusing the classics with the spirit  and  passion of the contemporary artist.

In  the  “Sleeping  Beauty,” David  Campos, unveils what would only exist  in dreams,  marrying  fiction  with  present-day reality,  and  beyond.

Like a movie on a full-screen, it starts with the choreographer conducting classical ballet class.  A look at a wall clock jolts him and he flies off, racing down winding stairs, into a  busy street in Barcelona, almost  gets  knocked  off  by  a  passing  car,  flips  over  and   in  a  split   second  of  the mind,  finds  himself  in an office  face  to face  with   a  prospective  sponsor  who  turns the pages  of  his  ballet designs  and  production  proposal, only  to  wish  him  good  luck  in  the pursuit  of his  dreams.  All too real  for  those  in the audience,  who  have  lived  and  continue  to  live  in  pursuit  of an  ephemeral  dream.

The  ballet  itself  opens  with  the sinister  presence  of  a  black-shrouded Carabosse, in  a  rose-covered  palace, threatening  a  group  of  timorous  fairies,   dressed  in floppy  tutus  and  green wigs. Their  dance  is  a  mixture  of  the  comic  and  their futile  attempts  to  protect  the  infant Princess Aurora  kept  in  a crib  resembling a caracol.

Enter fairy godmother with her magic wand, threatening the evil Carabosse.  Carabosse predicts death to the princess when she grows up.  By a mere  prick  in the finger,  from  a  shaft  of  light  like  steel  (not  the traditional  spinner’s needle).

On full screen, we see the lovely Princess Aurora growing up, a child playing in a swing, in a kind of enchanted forest.  We see her later as a young and lovely girl, a picture of innocence, at the threshold of womanhood.

The character is danced by the lovely Elline Damian,  a superb  Filipino ballerina,  deserving  of  the title  prima  ballerina with  impeccable  technique  and  the most  enchanting physical   qualities.

Watching  friends and lovers from  the tower of her castle, the Princess stands fascinated until  hundreds of  shafts  of  light,  like  shooting  stars pierce the air and one steely   light finds her finger and she falls into a swoon, cursed by the evil Carabosse.  But  her  fairy godmother appears and commands that death shall not  claim  her  but  that  she  would  only  sleep  for a hundred  years.

David Campos’ hundred  years  begins  in  1912  and  encompass  many   events    in  the world,  and images  of  great  as  well as  ignominious  leaders  are  flashed  on  the giant  movie  screen.  The  Bolshevik  revolution,  Hitler  and  the  fall of the  Third Reich, America  with  its  emblematic  leader,  Roosevelt,  at  the threshold  of war,  the disintegration  of  the  Communist  myth,   the  fall  of the  Berlin Wall,  and  more current affairs, such as Barack  Obama.

A  sleeping  princess  is  discovered  in  the forest,  blanketed  by  the  golden  leaves  of autumn.   Scientists  in   protective nuclear  suits  carry  her  off  to  their  laboratory,  where  they  attempt  to revive  this  lovely  creature  from another  age. Her  awakening  is  both  a   traumatic  and  delightful  realization  of  life  after  a sleep  of  a  hundred  years.

Vincent Gros is the prince who awakens the woman in her.

A take-off  from  the  old  fairy  tale  is  an almost  faithful  interpretation  of  the Blue Bird  pas  de deux danced  with assured  strength  and  classical technique  by  Eduardo Espejo  and Aileen  Gallinera, two  Filipinos  of international  stature.

Aurora, with her  modern-day  prince, watches  television where she sees  the  wedding  of  the  sleeping  Princess  Aurora, and  as  she  sees  herself  on the screen, she  whispers,  “I  am  her” repeatedly. She  suddenly  gets  up and  runs  into  the wedding  scene,  and tries to claim  the groom of a  hundred years  ago.

The end sees  the Princess  and  her modern-day  Prince  as  bride  and  groom,  dancing  the grand  pas de deux  from  the  old  fairy tale,  the sleeping  princess.

Rather than  set  the ballet  in the traditional  German  village,  David Campos chose to  place  the opening  scene  in  today’s  disco, where  young people  meet, drink, dance,   and  indulge in dangerous  flirtations, as  Giselle (versatile Aileen Gallinera) does  when  she meets Albrecht (Jesus Pastor).

When  the   party ends,  the couple, in  a  state  of  light  intoxication,  walk  away  perhaps  in  anticipation  of  a short-time  romantic  liaison. Out  of the dark night,  two  hoodlums appear,  obviously  attracted  by  the young  Giselle,  whom  they brazenly  accost.  Her  new-found  “friend” Albrecht  tries  to  protect  her,  but  is no match  to the  two .  He flees, leaving Giselle at the mercy of the two hoodlums.

She escapes in the hollow tunnels of the underground trains, a helpless prey.  The  sight  of her  flight,  her  heavy  frightened  breathing   juxtaposed  with  the swift   passing  trains  produces in the  spectator,  the audience,  a  sensation  of helpless nervousness.

Finally  caught  into  the clutches of the  merciless  pair,  she  is raped  repeatedly  and  left  for  dead.  Later, police  and  ambulance  rush  the  almost lifeless  body  of  Giselle  into  a  hospital’s  emergency  ward,  as  her  friend,  Albrecht  who  led  the  police  to  the  scene  of the crime,  sits despondent  and remorseful  in the waiting room.  The  giant  screen  projects  the   victim’s  vital  signs  in  a  monitor,  until  the  dreaded  moment  that  spells  death.

Taking  off  from  a  Spanish-Catalan   myth  of  maidens  of the  waters,  rather  than  the  tale  culled  from  the  traditional  story   resurrected  by  Heinrich  Heine  into  a  ballet  libretto,   David  Campos  floats  images  of  maidens  in white, from  the waters  of  a lake.  Water    gushes, menacingly, until women’s forms fall like zombies into  the ground. These are not beautiful maidens.  They  are  frightening  specters   that  trudge  forth,  pulled  into  the stage  by  black-clad  and  hooded  figures,   straight  from   a  scene  of  nightmares.

The dancing—better described as visions of attacking female ghosts—begins.  A  rapist  ventures  into  the terrain  of the  ghostly  maidens,  is  attacked  and  the  specters  feast  on  his  remains.  The other one  falls  into  the trap  and  is  promptly  disposed of  in  a  macabre  dance  of death.

Giselle, frail and  ethereal, joins  the  sisterhood  of  vengeful  spirit-maidens,  but  is  still warm  with  a  loving   human  heart.  She  sees  Albrecht as he  appears  with  flowers  for  her  grave,   his  heart  weighed  by  true  grief and  remorse. Here  both  Gallinera  and Pastor  proved  their  mettle  as  great  actors  as  well  as  strong   dancers  in the classical  tradition,  although  imbuing  their  dance  with  a  more  dramatic-contemporary   character.

When  attacked  and  threatened  by the   maiden-ghosts, Giselle  steps  in between  the  vengeful  group  and  the  man  she  loved.  Here,  Campos snatches  snips  of  steps  from  the traditional  act II  variations,  fusing  them  cleverly  with  his   contemporary  style,  for  the  famous  pas  de  deux.  The transformation is seamless,  as  in the hands  of a  master.

As  in  all  nightmares, the  rising  sun  casts  away  the frightful  shadows  of the night. Albrecht  is  saved,  as  the maiden-ghosts  disappear  into  the waters,  and Giselle,  loving  and  forgiving  joins  them.

It is Albrecht, still nursing a broken heart.  he  walks  away,  and  he  too disappears  from  view,  as  he walks  into  the forest,  leaving  the  audience  in tears.

A touch  of  genius  has  stepped  into  our  small  circle  of  dance.   Those  who  supported  this  risky   project  deserve  our  gratitude:  the Spanish  Embassy  led  by  Ambassador Jorge Domecq,

Instituto  Cervantes,  Fundacion  Ramon  Llull  of  Cataluna,  and  Cultural  Center  of the Philippines,  and all  the generous  sponsors  who  brought  this  magic  on stage.