Thanks to Aegis–no, really–a ‘Jekyll and Hyde’ that works | Lifestyle.INQ ❮ ❯ 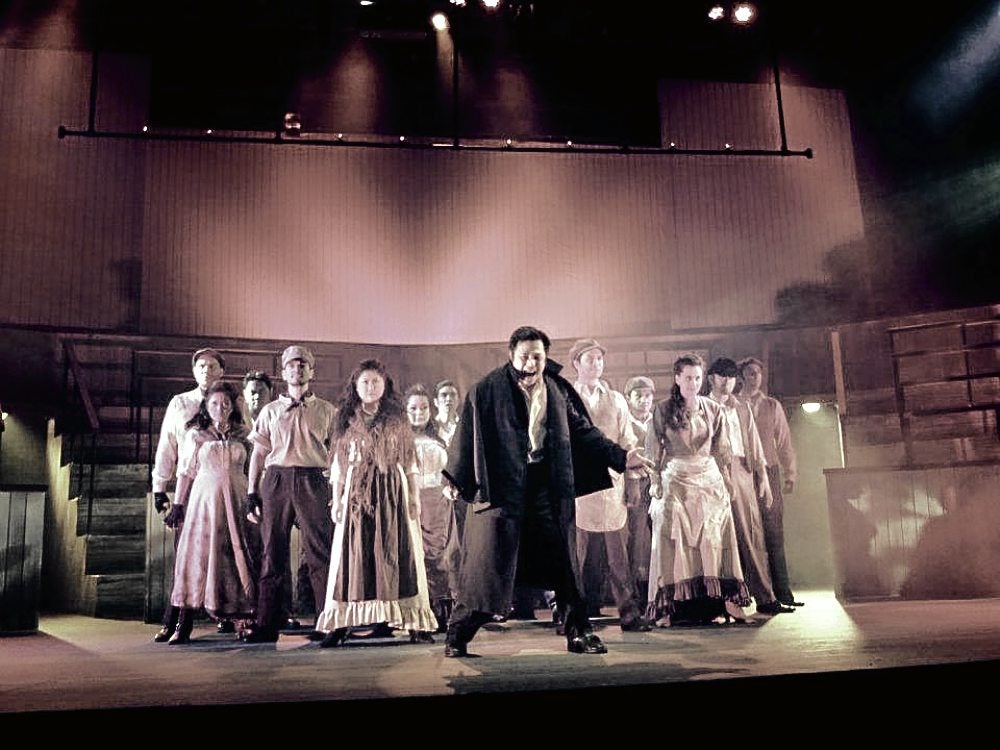 It’s only a ponytail that separates man from beast in  ‘Jekyll and Hyde,’” went the opening line of Ben Brantley’s blistering review for the New York Times of the Frank Wildhorn-Leslie Bricusse musical when it opened on Broadway in April 1997.

Jeers notwithstanding, that prim tonsorial appendage, along with its unhinged cousin the frizz, made a leap beyond the footlights of New York and gained an even wider audience with the 2001 DVD release of a live performance of the musical, which featured the former “Baywatch” beefcake actor David Hasselhoff playing the conflicted doctor of Robert Louis Stevenson’s novella.

In a climactic scene, when the two opposing personalities begin warring inside the doctor’s body, Hasselhoff sings—bellows—a song whose every line alternates between the “normal” voice of Jekyll and the growling, sinister voice of Hyde. And with each quicksilver shift, Hasselhoff uses his character’s hair to denote the transformation—left this way to show half of Jekyll’s face still with tidy tresses, right that way to show Hyde, one shoulder now humped like a minor-league Richard III, sporting wild, bristling curls.

We have no idea how Broadway-watchers took to this stupendous sight. What we’re sure of is that, had the same routine been done in the Philippines, the audience would have burst out laughing. Unlike New Yorkers, you see, Filipinos—or at least those attuned to local pop entertainment—have a ready peg for “Jekyll and Hyde’s” signature hair-song switcheroo.

It’s called “Sinta,” a blockbuster duet by the jukebox pop-rock band Aegis (“Pag-ibig ko sa iyo ay tunay at totoo/Singtamis ng wine, sintatag ng sunshine”) that has become a staple of so-called “doble-kara” competitions on noontime TV, as the favored number by countless amateur singers with freakish pipes who proceed to belt out the song’s male and female parts all by themselves. And yes, dressed likewise—one half in men’s clothes and coiffure, the other in gown and flirty hair extensions. Take that, David Hasselhoff.

Perhaps, then, to Aegis we must give thanks for the fact that Repertory Philippines’ taut, surprisingly tender production of “Jekyll and Hyde,” directed by Menchu Lauchengco-Yulo and ongoing until April 22 at Onstage Greenbelt 1, has ditched the schizoid hair act. Its alternating lead actors, Michael Williams and Jett Pangan, opt instead for subtler, less outlandish revisions in their character’s voice, body, demeanor, etc., whenever the musical calls for such transformation.

The work Brantley had dismissed as “leaden, solemnly campy” remains marred by vivid shortcomings—maddening repetitiveness, for one; characters too schematic for comfort (Jekyll’s two love interests are “good” society lady Emma and “bad” but scintillating wench Lucy—and they’re not even Stevenson’s, but embellishments adopted from Hollywood); and, not least, a score that, while easy on the ears, also banks on bloat and bombast to make its point.

But, on the way to the Rep stage, the baroque material seems to have learned to dial itself down, speak more softly, and is now a pleasing, even alluring work largely scrubbed of its daffy overtones.

Lauchengco-Yulo’s watchword appears to be restraint. Her back-to-basics tack is evident from the musical’s first few scenes, set in a Victorian surgery theater with stationary risers (the set design is by New York-based Joey Gonzalez-Mendoza) that mainly serve as the habitat of the Greek chorus-like ensemble.

In the DVD-Broadway show, when Hasselhoff’s Jekyll and Andrea Rivette’s Emma sing the first big duet, “Take Me As I Am,” a backdrop of writhing, dancing couples supplies gratuitous underscoring to the song’s already profuse romanticism.

This production apparently would have none of such excesses. Lauchengco-Yulo stages “Take Me As I Am” as a still, stark moment in the middle of a party. She even speeds up the love duet a second or two, probably to keep it from becoming too cloying.

Investing “Jekyll and Hyde’s” music with more than conventional prettiness is a challenge, because Wildhorn’s songs are, taken individually, as tuneful as they come. Unfortunately, they’re also the kind that invariably follows the template memorably parodied by “Monty Python’s Spamalot” in “The Song That Goes Like This”: “I can’t believe there’s more/It’s far too long, I’m sure/That’s the trouble with this song/It goes on and on and on.”

In other words, almost every track is designed to be a musical high point. Put them all together in a nearly three-hour musical and you get what Ethan Mordden, in “The Happiest Corpse I’ve Ever Seen: The Last 25 Years of the Broadway Musical,” calls a “scream-the-theater-down score.”

In Act 2 alone, once the interminable ensemble number “Murder, Murder” is over, just about every succeeding song balloons to a rafter-rattling climax, from the ladies’ mellifluous duet “In His Eyes” to Hyde and Lucy’s steamy “Dangerous Game,” to the solos “The Way Back/Angst II,” “A New Life” and the hair face-off number itself, “Confrontation.”

One after the other, an unending sturm und drang of full-throttle singing and blaring orchestration that can leave one, after a while, greatly fatigued.

Rep’s solution to this grandiloquence is simply to scale back on many fronts. The fire that caps Hyde’s “Alive” at the end of Act 1 is nowhere, for instance. Also banished is the visual cluttering the Broadway ensemble so often does to crucial moments in the show.

Music-wise, Emma’s stately “Once Upon A Dream” now feels like a wisp of a song (Cris Villonco is a superb Emma). The same economy strips “Dangerous Game” to its eerie, sensual core. And the crossover hit “Someone Like You”—in the DVD performed by Coleen Sexton’s Lucy as a powerhouse ballad more fit for the concert arena—here comes across as a lament of loneliness, staged sans frills and sung with aching beauty by the excellent Kalila Aguilos, the scene somehow reminiscent of “Les Miserables’” “On My Own.”

Aptly enough, this conscientious pulling back achieves its most salutary effect in the audience’s most anticipated number, “This Is The Moment.” The likes of Colm Wilkinson, Anthony Warlow and Broadway originator Robert Cuccioli could make something decent out of this by-now inescapable pop-inspirational warhorse. Hasselhoff simply bludgeons his version into a pulp.

In the Rep show, though, Williams’ take is a wonder—terrifically sung but, also, and more importantly, honestly told. That is, Williams refuses to sing the song like an anthem, anchoring instead his thoughtful, unshowy reading of the melody and lyrics on an actor’s great feel for character.

And he aces the moment without the Broadway razzmatazz— the living room sliding out, say, and a lab wheeling in with a wave of Jekyll’s hand. Williams just stands there, and “This Is The Moment” sounds new.

Pangan is, without a doubt, the more powerful singer, and as Hyde, with his muscular rock star’s voice unleashed, he is simply untouchable (his “Confrontation” is an astonishing scorcher). The youngish, hot-headed Jekyll he serves up, however, is worlds away from Williams’ fully fleshed-out tragic figure, whose every pore and gesture seems to heave with pained history and thwarted ambition.

Excepting Jack Salud’s rather distracting struggle with the King’s English, the ensemble is also a valuable lot, their strongly sung and choreographed numbers briskly hustling the musical along. The women, in particular, heat up the stage in “Bring On the Men,” Lucy’s big number in the Red Rat pub—a poor impersonation of “Mein Herr” from “Cabaret,” but one that Aguilos et. al. charge with fetching brio.

The ditty itself is not in the final Broadway production, replaced by another showstopper called “Good ‘n’ Evil,” which supposedly supplies Jekyll the idea to use himself as the guinea pig for his experiments. Of course, why a prostitute would launch into a disquisition on the topic as her main song of seduction is another one of those incoherencies this problematic musical is heir to.

Good thing the production licensed to Rep is spared of it (more than one approved version is available, apparently). Or Lauchengco-Yulo’s resourceful reimagining would have had more than mutant ponytails and TV circus shows to worry about.