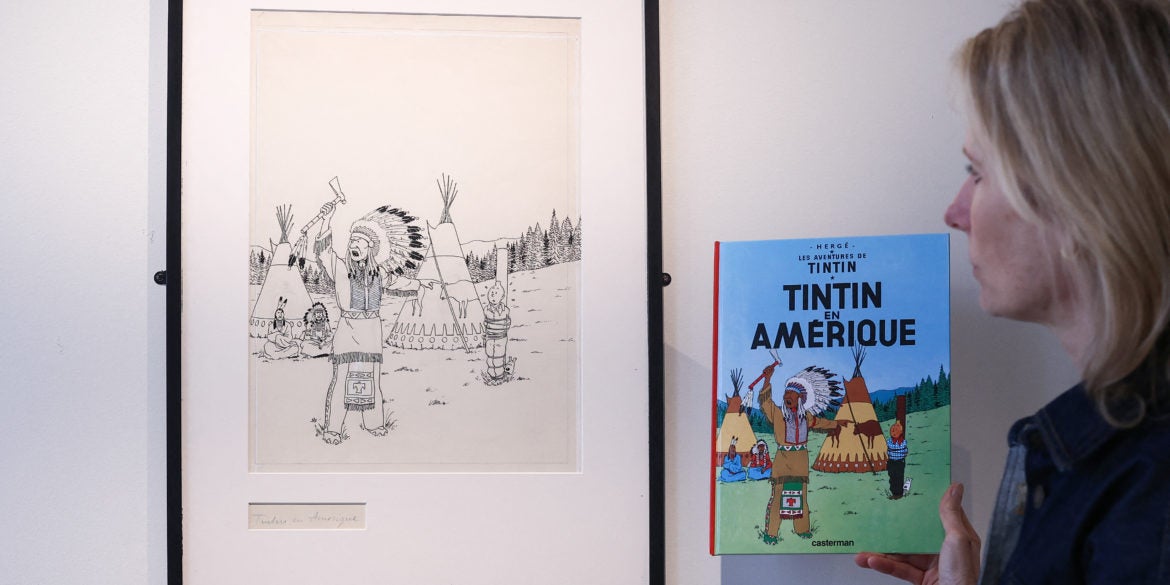 Vinciane De Traux, Director of Artcurial Benelux poses with an original front cover of "Tintin in America" from a 1942 painting by Tintin creator Herge at auction house Artcurial in Brussels on January 11, 2023, ahead of its auction in Paris on February 10, 2023. (Photo by Kenzo TRIBOUILLARD / AFP)

BRUSSELS, Belgium — Known around the world for his blond quiff and daring adventures, Belgian comic book hero Tintin is setting the art world astir with an original illustration that could set a new record at the auction.

The 1942 black-and-white ink drawing by creator Herge for the cover of the third volume in the series, “Tintin in America,” is set to go on sale in Paris next month.

The illustration, which shows a Native American chief pointing an accusatory finger at the tied-up Tintin, has been given an estimate of between 2.2 million to 3.2 million euros ($2.4-3.5 million) by auction firm Artcurial.

That top figure would see it match an original illustration for the 1936 cover of the Tintin adventure “Blue Lotus” – which became the most expensive comic book art when it sold in 2021.

But there are hopes that the upcoming sale for the cover of one of the most popular Tintin books could go higher and beat that record.

“We are talking about drawings that belong to the history of art,” said Vinciane de Traux, Artcurial’s director for Belgium.

“Herge is, along with (surrealist painter Rene) Magritte, the most important figure in Belgian art.”

The illustration – put up for sale by an unidentified Belgian collector – is the centerpiece of the February 10 auction in Paris.

De Traux said it was a “larger, more impressive composition” than the record-breaking Blue Lotus work, and was a perfect example of the style used by Herge, whose real name was Georges Remi.

The picture has been displayed at exhibitions in Paris in 2009 and Lausanne in Switzerland in 2010.

“It is totally documented and authenticated,” de Traux said.

READ: The (Graphic) Adventures of Tintin

The sale of the Blue Lotus illustration originally drew ire from Nick Rodwell, the British husband of Herge’s second wife Fanny Vlamynck, who holds the rights to the Tintin works.

The famous picture of the black dragon on a red background was sold by members of the Casterman publishing family, who said their father Jean-Paul had been given it by Herge as a present when he was seven.

The future head of the publishing house reportedly kept the illustration folded up in a drawer for decades.

That was disputed by Rodwell, who criticized the Castermans for not returning the work and said it rightfully belonged in the Herge museum in Belgium.

But relations were eventually smoothed.

“The rights-holders of Herge’s works were pleased with the outcome of the sale,” de Traux said.

“Everyone is happy that the market is supporting the value of Tintin.”