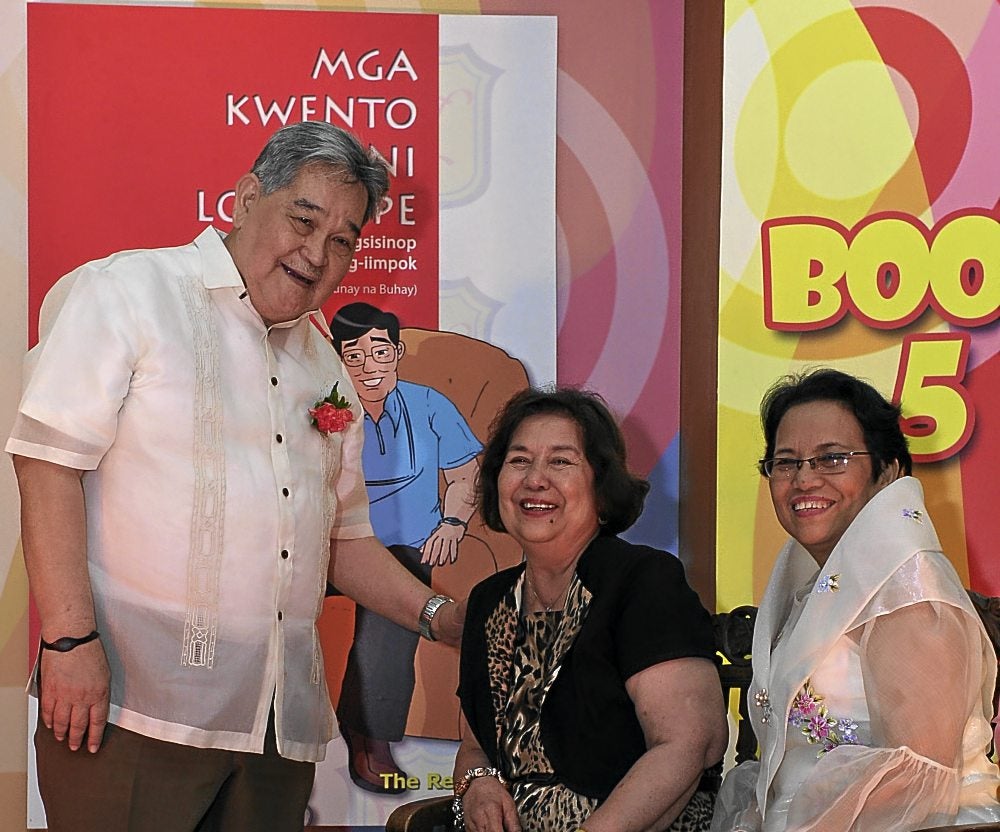 Real Bank gets real on thrift and savings

Who would have thought that our year will start with three big achievements?” asked Jose G. Araullo, Real Bank chair, which recently celebrated its 35th anniversary.

He was referring to the bank’s well-received travelling exhibit, the launch of “Mga Kwento ni Lolo Pepe Book 5,” and an Anvil Award.

Araullo made his remarks during the launch of the latest book in the “Mga Kwento ni Lolo Pepe” series, which compiles true-to-life stories, “on thrift and savings,” as the bank chair put it.

The book also traces the fascinating story of lolo Pepe (Araullo) and how he become a responsible spender, and how he tries to apply his penny-wise ways throughout his life.

The book also talks about his marriage to Amparing Javier Araullo and his life as a father to five sons—Allan, Jojo, Jonathan, Anthony and James.

The book and exhibit are part of Real Bank’s advocacy, “Bata… Bata… Mag-impok at Magsinop.”

Also part of the advocacy is “Madali lang Magbangko,” a traveling exhibit which has toured 10 select schools in Manille and Luzon, along with Temyong Tipid, Real Bank’s mascot, palanggas.

Real also held the “Alkansya” making contest.” Ling Ochoa, Real Bank VP for corporate communications, said “it is important to assess the grasp and acceptance, through practical applications, of the values being taught by the advocacy.”

The bank also won the Anvil Award of Merit for PR Tools for “Being Real in a Changing World,” an extraordinary musical documenting the bank’s history over 35 years through a series of songs performed by the crème de la crème of Philippine theater, dahlings.

“It is our deep desire to bring thrift and savings into the children’s consciousness as early as grade school that is the main driver of all these activities,” said Araullo.

During the launch, Education Undersecretary Yolly Quijano thanked Marylindbert, headed by Linda Legaspi, especially for inviting grade schoolers to the launch. The school kids will benefit from the books, she said.

Après the launch, it was time to dig into the late afternoon dinner, superbly done by Glenda Barretto of Via Mare.

Later the invitees put on their dancing shoes and rocked the dance floor as hits of the ’70s were played by a live band.

That iconic restaurant which started in Boracay has spread its wings and finally landed at Bonifacio High Street Central, dahlings. Its owner, young restaurateur Juan Elizalde and his partner, Paolo Occhionero, have brought Aria to Manila. My palangga, JM Rodriguez, hosted the exclusive opening, dahlings. It began with prayers of thanks, led by Juan E’s eldest daughter, 6-year-old Isabeli.

It was the highest number of awards won among the hotels in Singapore, Indonesia, Thailand, Malaysia, Vietnam and Philippines, after a six-month study of 167 nominees by a panel of judges.

“These accomplishments will greatly motivate all of us to continuously exceed our guests’ expectations through the unique synthesis of Thai hospitality and Filipino geniality here at Dusit Thani Manila,” said the trés grateful and unassuming Prateek, no less.

This year’s charity is the Make-A-Wish Foundation, Singapore. The Adopt-A-Wish Programme allows individuals or companies grant the heartfelt wishes of children with life-threatening illnesses. Now, dahlings, that’s what giving from the heart is all about. ’di bala, palanggas?