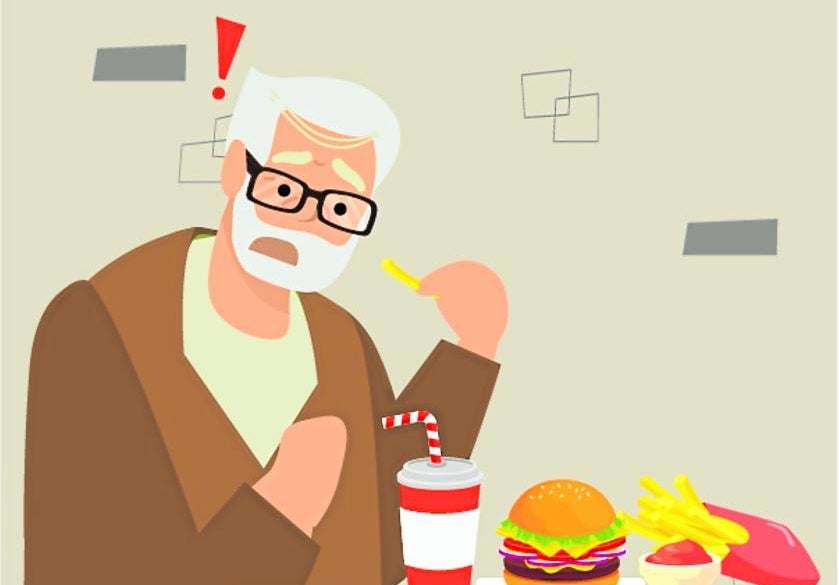 A few months ago, we admitted a patient in his late 50s—a widower who was living by himself—who consulted us for progressive shortness of breath even with mild physical exertion. He had to pause every now and then during the history-taking to catch his breath. He noted an increase in weight of around 10 kg since a month earlier, which he thought was just due to his increased appetite. When we inquired what sort of foods he regularly ate, he said that he was taking instant meals most of the time since his maid, who also served as his cook, left several months ago.

On physical examination, his blood pressure (BP) was markedly high at 210/100 mmHg; his heart rate was very fast at 120 beats per minute; and he had the telltale signs of heart failure—engorged neck veins, congested lungs, enlarged abdomen and edematous lower extremities from the feet to the thighs (manas) due to fluid retention. Auscultation of the heart and lungs using a stethoscope confirmed the findings of heart failure.

It was easy to identify the culprit in this patient. He was already hypertensive to start with, diagnosed 15 years earlier, but the BP used to be controlled with the antihypertensive medicines he was taking. But his maintenance BP pills were no longer able to control the excess sodium or salt he was regularly taking in. The source of this excess salt load was most likely the instant meals he was eating.

Time and again, we have warned about the health risks of taking heavily processed foods especially instant meals. There is no question that processing foods has revolutionized modern-day nutrition, but when these consist a big part of our nutrition, we may be at risk for the complications of some of the compounds used in food processing. One of these is sodium, which is the key substance used to keep food fresh.

Many patients we’ve advised to go on a low-salt diet wonder where their excess sodium is coming from when they don’t add salt anymore to their food, or use other salty condiments. Even if they’re careful about adding table sources to their food, the canned and other processed foods they’re taking may already contain loads of it. We should realize that we get up to 70 percent of our daily intake of sodium from the processed and restaurant foods we eat.

Always check the labels before buying processed foods. These include breakfast cereals, cheese, canned vegetables, bread; snacks like pies, cakes and biscuits; sausage rolls; meat products like bacon, sausage, ham, salami and paté; microwave meals or instant meals like instant noodles and burgers. If it contains more than 300 mg of sodium chloride for every 100 grams of food serving, it’s better to avoid it. Be wary that sodium may be called other names on the label such as monosodium glutamate or disodium phosphate.

Nutrition experts like Dr. Max Sidorov and his colleagues at the International Council for the Truth in Medicine (ICTM) have published several books to warn the public about the health risks of heavily processed foods. Their simple rule is, the more raw the food is, particularly fruits and vegetables, the more nutritious they are. Eating more of these and limiting processed foods can have significant implications on public health.

In Japan, for example, they cut down the national incidence of strokes by simply cutting down their salt intake by 50 percent. The high salt intake was mainly coming from processed foods.

Many health experts, including Dr. Sidorov’s group, consider preservatives and additives as health culprits, and consumers must be more conscious of them rather than simply checking out the calories, fat or carbohydrate contents of the foods they buy from the supermarket. If we could do away with as much of these artificial foods and the additives they contain, the better outlook we have for our health.

Speaking of toxin removal, it’s important that we drink enough water daily and not replace it with soda. I know some people (even a few doctors) who can finish a 2-liter soft drink bottle daily, but hardly take in any water, believing that the cola drink should be good enough as water.

Six to eight glasses of water daily, more during hot summer months, help our kidneys in eliminating all the toxins formed in the body. Our body is like a complex factory with nonstop operations 24/7. Just like any factory, there will be waste products, and these have to be eliminated properly by the liver and kidneys. Adequate hydration helps these two organs with this vital function of eliminating the body’s toxins.

Dr. Sidorov gives us in his book an example of a simple menu he follows.

For breakfast, he takes a large green smoothie with spinach, apple, bee pollen, hemp protein and some coconut crystals or honey. Some experts would recommend that we take the green smoothie first thing in the morning when we wake up together with two glasses of water.

For his snacks throughout the day, he eats organic fruits and raw nuts without any limit. He doesn’t even count the calories of the foods he eats. He also drinks a liter or so of raw organic milk during the day.

For lunch, he may have a sprouted grain mix with whatever sprouted grains, together with a large salad full of leafy greens with some hemp oil, hemp seeds and spices for flavor.And for dinner, he eats another big serving of fruit and vegetable salad, plus another green smoothie.

“This is a very basic meal plan, but a raw food diet is extremely diverse, you can search on Google for raw food or vegetarian recipes and you will be amazed at the possibilities,” he advises in his book.

He assures us that if we get rid of all the junk in our diet, we should see and feel changes in our bodies within the first few days.

He summarizes his basic eating plan as follows: At least 50 percent of our meals should be raw, like a salad with all meals and raw unprocessed nuts, fruits, dried fruits. Raw food bars may be eaten as snacks; two or more green smoothies daily with hemp protein and a scoop of a whole food green powder; a teaspoon of unadulterated bee pollen which he places under the tongue and allows to dissolve, before swallowing it, or it may be added to the smoothies, shakes or salads; at least 1.5 to 2 liters of clean filtered water daily with 500 ml or 16 oz of water (two glasses) taken upon waking up.

Well, that doesn’t seem to be a complicated dietary recommendation. But the health dividends it brings may be worth more than half a dozen pills we need to take daily, as a result of an unhealthy diet—which may consist of the instant meals we’re fond of that may lead constantly to various illnesses. INQ