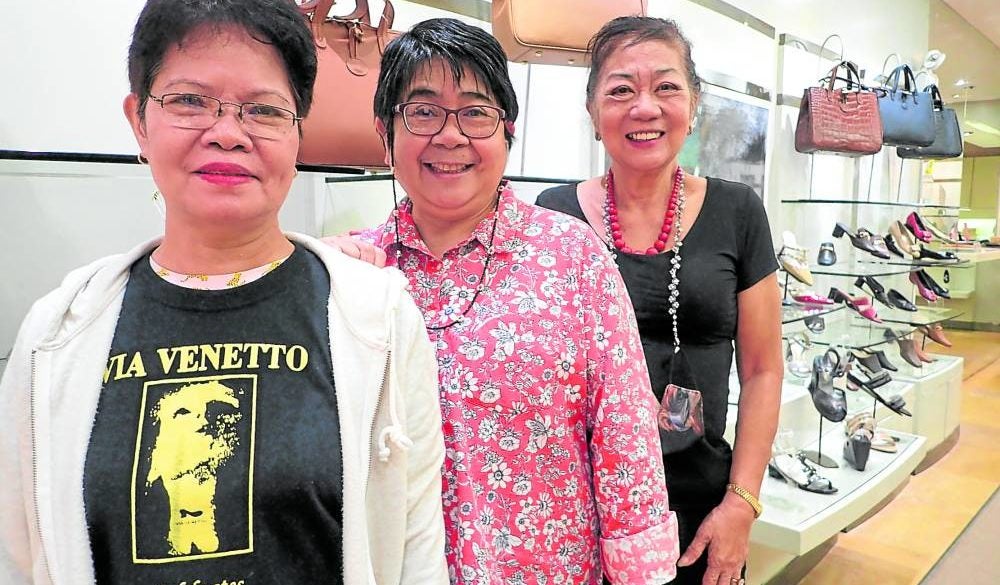 How homegrown shoe brand thrived for 50 years despite cheap imports

A woman catwalked inside the carpeted store as she tried on two different styles of high heels, posing dramatically in front of the floor-to-ceiling mirrors. You could tell she was thrilled. It turns out she’s been looking for Via Venetto for 30 years.

“I thought it had closed down,” she said, explaining that she hadn’t been out much since she got married.

When she happened upon the shop again in Greenbelt in October last year, 57-year-old Roxie Tionloc was so delighted, she did an impromptu dance right then and there—”Napa-TikTok ako sa tuwa!”

“I like their shoes because they’re light; it’s like you’re not wearing anything,” she said. “And it’s sturdy. The last time I was able to buy (from Via Venetto) was in 1993. Imagine, 30 years in storage? When I took them out, they were still intact—no mold, no peeling.”

Unfortunately, she was forced to give them away because her feet had grown one size since.

Stories like these are not uncommon within the walls of Via Venetto stores (they have branches in Greenbelt, Glorietta, Alabang Town Center, SM Megamall and Trinoma). According to owner Yolanda “Ging” Bello-Pajaro, part of the reason they survived all these years was because of their loyal patrons, or suki.

In fact, when longtime clients are around, they sometimes end up convincing new customers to buy by sharing their own experiences. They would swear up and down that Via Venetto shoes and bags are made to last, each with tales straight from their own history of wearing—and over-wearing—the proudly Filipino brand.

One favorite anecdote of an old client is how her shoes even withstood wading through the terrible floods of Manila. And some clients have even brought in their 25-year-old shoes for repairs (a service the company also provides).

Before the pandemic, they were actually doing quite well, even competing with international brands and exporting at some point. But it was the influx of shoes from China that became their biggest threat “because those were so cheap.”

They survived by sticking to their principles: making the best locally made products possible. So a pair of Filipino-crafted Via Venetto shoes may have “leather from Italy, soles from Germany, heels from France and accessories from Austria.”

And they never wavered.

“Well, I was nervous,” Ginggay admitted. “Of course, it’s expensive. But she (Ging) didn’t have any qualms about those things. It’s a good thing she’s the boss. She really stuck to her quality and service.”

Early on, Ging would bring her shoemakers to major shoe fairs abroad to help them learn and innovate. Eventually, during the years when there was labor agitation in Marikina, they picked several of their highly skilled shoemakers with potential entrepreneurial inclination and helped them set up their own little factories.

“We supplied them with leather, components, tools and some basic lessons on management and accounting. So we no longer had factories, it was just them,” Ging said.

It was a huge risk. They were afraid production would suffer once the workers were left on their own. But the opposite turned out to be true. No longer needing to answer to anyone, these shoemakers poured in the effort to prove themselves, putting much pride in their work. And this is what Via Venetto does: invest in people.

One of their shoemakers who has passed away, Nick Astillas, was one such example of how the business has changed lives.

“When this man applied to us, he made 30 samples, none of which passed our standards. So I finally told him to try other shoe stores. But he asked to try again,” Ging related. Then one day, Tingting Cojuangco told her to try making ballet shoes with adjustable strings along the collar, solving the problem of fit.

“So I gave that to Nick for a final try. He must have made VV1 (the model of the ballet flats) in 40 different colors since. From his small house, he was able to build a four-story home with VV1 carved into his new house’s narra door frame,” she said.

But as Via Venetto elevates the lives of its workers, Ging has also taught them to give back.

“Our shoemakers now have their own houses and are able to send their children to top universities. So I require them to go to orphanages and give back. I told them to give thanks to God. And a lot of people find this funny, but I told them that part of what we learn in UP (University of the Philippines) is that you are not only responsible for yourself but also for your country and other people. I told them, they have progressed beyond their wildest dreams, so it is now time to give back.”

Up until the start of the lockdowns, Ging would hold “Marikina Day” every Wednesday wherein she would give 15-minute speeches on how “hindi pwede ang pwede na” and “stagnation” and “making do” are dirty words in their company. In fact, even as there was already quality control during production, they would still do rigorous quality control once the products reach the stores.

So it’s no wonder clients keep coming back.

“Word of mouth is the most powerful. Though it’s not as fast as media or advertising, it has the strongest impact, especially if it’s from a friend. When you hear someone you know say, ‘Ayan, matibay talaga yan,’ you will really believe it,” Ginggay said.

“Mommy is very good with PR in the sense that she knows how to handle people. That’s why she’s the one who trained the staff. It’s not just a product, but also a service-oriented company,” she added.

Ging agreed. “It’s not just a matter of selling. It is a matter of human relationship and compassion.”

She trained her “girls” or sales ladies to listen. “That is very important, because some customers go to us not only to buy shoes, but also to vent their feelings.” Beyond just a place to do some retail therapy, Via Venetto has also become a safe space for them.

The shop has become a source of support for both sole and soul. And when they needed it the most, their clients were also there to support them back.

“Somehow, slowly, people became supportive of local brands. Maybe they feel like they were helping the country. Before that, colonial mentality really was a big problem, more so since our prices are high because our materials are so expensive. We had to deal with comments like ‘Local lang kayo, ba’t ang mahal-mahal?’ But in time, we were able to prove that our products were still better than even imported ones,” Ging said.