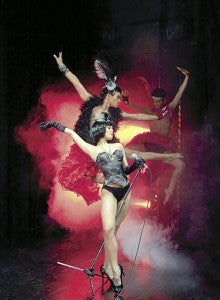 Upon joining BP in 2009, Floirendo recalled that the company’s morale was sagging after a series of conflicts between the former artistic directors and the board.

“It took time before the dancers regained their confidence,” said Floirendo. “We had a common purpose to make things work. We had to jumpstart everything. Now we want to get everything to another level.”

Floirendo is now on her third season, and BP is becoming more sustainable. It costs P30 million a year to run the company, which covers production, salaries and employee benefits. More than 40 percent of its income comes from block ticket sales, performances outside of the Cultural Center of the Philippines, and special events. The dancers have been kept busy with national tours and shows in partnership with SM.

In the past two seasons, BP had invited foreign guest teachers and artists to help raise the company’s artistic and technical standards. For the welfare of the dancers, more housing and better health insurance were provided.

The company has had a bumper crop of awards last season and is planning to revive the junior company Ballet Philippines 2. Floirendo is finding more ways to earn money for BP, such as the rental of its satellite Arts in the City studio in Bonifacio Global City.

Despite efforts to improve the operations and artistic standards of the company, the talk among the dance community is the bill which Floirendo, Morales and other BP executives are lobbying for. Authored by Sen. Ferdinand Marcos Jr., Senate Bill 2679 aims to make the Ballet Philippines Foundation Inc. (Ballet Philippines) the national dance company through legislation.

The BP president pointed out that many countries have a national dance company supported by the government. If the bill is passed, it could raise the salaries of BP’s dancers and provide funding to import guest teachers.

However, the bill didn’t sit well with the characteristically fractious dance community. As it is, BP enjoys office space, the rehearsal hall, and the use of the theater as some of the rights of a CCP resident company. The bill would expand the company’s privileges.

“We received opposition because of the fear of what would happen to them. If I were on the other side of the fence, I would never think that I was any less, and I’m not saying we are better,” says Floirendo. She added that the company is willing to help other companies. In the past, dancers from other groups could take their classes for free.

“We believe that BP deserves it because of its 42-year existence. It started its season when CCP opened in 1969, and it has a repertoire of over 400 works. We’ve developed world-class dancers. Everything has been documented.”