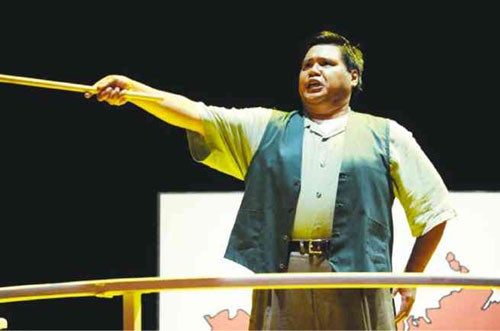 Filipino baritone in US production of Shostakovich operetta 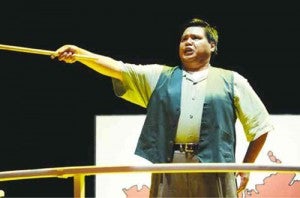 Baritone Andrew Fernando—who played the title role of Tchaikovsky’s “Eugene Onegin” at the Cultural Center of the Philippines a few years back—got to tackle another Russian role, this time as Sasha, the Soviet housing-unit dweller in Khrushchev’s Moscow circa 1980s, in Shostakovich’s first and last operetta, “Moscow, Cherry Town.”

The opera is described a musical comedy in three acts, with libretto by Vladimir Mass and Mikhail Chervinsky. It was mounted by the Long Beach (LBO) Opera in California, where the Filipino baritone has appeared three times in the last few years.

The operetta did well on opening night last weekend at the Center Theater of the Long Beach Performing Arts Center, with a review that went thus: “Dmitri Shostakovich isn’t the first name that springs to mind when the conversation turns to musical comedy. In fact, it might be the last. But one of the Soviet composer’s lighter works, an operetta that premiered in 1959 called “Moscow, Cherry Town,” has been dusted off by Long Beach Opera to remind music lovers that there was more to Shostakovich than somber symphonies and dire string quartets… What raises the level is the festive irony of Shostakovich’s music, with its biting commentary hidden behind a smiling façade. LBO artistic and general director Andreas Mitisek capably conducts a modest-sized orchestra through varying shades of ebullience, from bright optimism to black comedy to some middle ground where communal laughter takes arms again a sea of despair.”

Fernando described the opening night thus: “On the whole, it was a good feeling! The audience loved the show! Lots of laughter and satisfaction from our patrons. This one wasn’t particularly difficult, but still a singer has to be careful and smart to deliver the message without losing its subtle hint of satire.”

Known as “Moskva, Cheryomushki” in Russian transliteration, the operetta’s story is, indeed, one that would never have been told under the repressive regime of Josef Stalin, who loaded honors on Shostakovich but also twice (in 1936 and 1948) had his music denounced publicly.

A case in point is his opera “Lady Macbeth of Mtsensk” (1934), which was sharply criticized by the Soviet press reportedly (and apparently) on Stalin’s orders.

The Long Beach critic dissected the operetta as “a carefully calibrated satire gussied up as a frenetic farce, concerning Khrushchev’s mass-housing projects, those concrete behemoths that upgraded citizens’ living conditions while pummeling their aesthetic sense and nearly choking them to death with red tape.”

As the real scenario made it appear, the waiting list for these apartments was long, and married couples, like the characters of Sasha (Andrew Fernando) and Masha (Peabody Southwell), were often forced to live apart until an appropriate residence could be secured.

Telling this story operatically “can be quite complex,” admitted Fernando. “However, it can be straightforward but not without giving a hint of the social and government situation of the former Soviet Union of that time.”

How did Fernando (who will grace the UP Balay Kalinaw Intimate Concert Series on July 22 with Mary Anne Espina, Clarissa Ocampo and Christopher Oracion) transition from the nobleman in Tchaikovsky’s “Eugene Onegin” to the government housing-unit dweller Sasha in Shostakovich’s “Moscow, Cherry Town?”

Initially, the Filipino singer said he got into the Soviet psyche in the opera by just understanding how people in the Soviet Union felt about the system. In the case of his character, Sasha, he had to internalize the pain of not being able to be in the same house with his wife, which to him is a very frustrating experience.

Of his two Russian roles, Fernando said: “Sasha is a commoner with no money. Onegin is a person of higher status. Singing Onegin is truly amazing, though. The dramatic content of the character is vaster and deeper—ironic, because Onegin for his part is bored with his life, hence, living it aimlessly. He is someone who will not commit to a relationship. On the other hand, Sasha is determined to be with a home and marriage. Indeed, a happy, sad fella!”

“The music, to my surprise, is very tuneful! I know that when we mention the name Shostakovich, we may right away think we would hear very complex music, but not ‘Cherry Town.’ It turned out to be a delightful, bright operetta! I think Russian music in general is always beautiful. The part for my role Sasha is very melodic and singable, so to speak.”

On opening night, Fernando admitted he was nervous as usual, but in a positive kind of way.

“When I perform, I downplay the critics’ coming verdict and think more of communicating the story and music. I always pray I get to do my best.”

Fernando’s journey to vocal maturity was probably helped in no small way by his being presented in public master classes given by legendary names in opera such as Carlo Bergonzi, Tom Krause, Jane Eaglen, Deborah Voight and Dolora Zadjick.

Described by Musical America as a “major presence,” the Filipino baritone sang “Rigoletto” in Modesto in February 2007 to critical acclaim.

He created the role of Powhatan in the world premiere of Linda Tutas Haugen and Joan Vail Thorne’s “Pocahontas,” presented by the Virginia Arts Festival in cooperation with Virginia Opera in May of 2007, as a contribution to the 400th anniversary of the settlement in Jamestown, Virginia.

He also sang the lead role in Bartok’s “Bluebeard’s Castle,” presented by Let’s Shout Out Inc. of Boston.

On the state of his vocal instrument now, Fernando said: “I would say it has become more mature, with a lot more ring and focus. I love where it is now and I am excited where it can go from here. We baritones develop more as we age. We are like good wine, better with age. Granted that we are well-guided and continue to work hard, hopefully it brings out the best in us.”