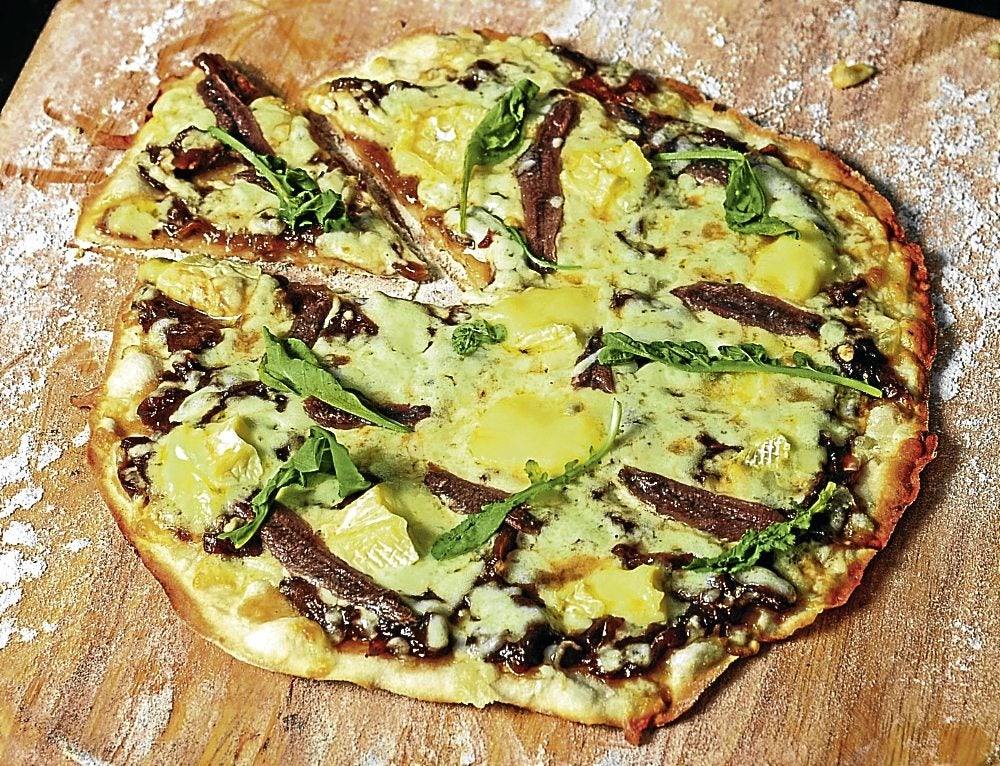 Kneading romance out of a pizza dough

“We would both prepare the pizza dough,” says 26-year-old Tanco. “Since we do it manually we take turns in kneading the dough. It’s a teamwork between Liz and I.”

Tanco and Yap have been together for a year now. It’s been a plus point for Tanco being a chef and Yap, a food writer from Yummy Magazine. Their common interest would definitely be food.

“I recall our first date all we talked about was food, food and more food,” says Tanco, who also remembers that they were introduced twice by two different people who don’t know each other.

“It’s kind of funny, at least we get to relate in a lot of stuff. Sometimes it’s even hard to eat out together because we tend to overanalyze things,” Tanco says.

Tanco bakes the pizza in a specially made brick oven, pugon-style, at home in New Manila. With this oven, Tanco said, high heat and short time brings out new flavors that a conventional oven will never have.

He creates unique combinations of pizza that cannot be found anywhere else. He makes Truffle Pizza (a combo of cream cheese and truffle paste) and Pissaladiere (mix of cream cheese, caramelized onions and anchovies), and Arugula.

His girlfriend isn’t much of a wine drinker, but just the same, Tanco pairs the pizza with white wine.

“We don’t usually like to eat fancy food like foie gras,” Tanco says. “The simpler the better. A romantic dinner for us is where we both cook for each other.”

They once had a romantic dinner of Angus beef burger, prepared from scratch, at Tanco’s family farm in Tanauan, Batangas. They had the meat ground and seasoned with salt and pepper. The grilled beef patty was topped with gruyere cheese and buttery brioche buns, which they also baked together.

“I cook as much as I can, but sometimes we just want to relax and eat out,” says Tanco, son of Anabel Lichaytoo Tanco, owner and founder of Philippine Pastries Inc. that operates Bizu Patisserie.

Life as a chef

Tanco finished culinary arts at the College of Saint Benilde and went straight to Shanghai, China, to work in a restaurant called Le Platane and currently in Bizu Patisserie.

At Bizu, he’s in charge of the research and development department, where he creates new items for the menu, standardizes operations and finds new ideas to bring in the company.

He admits he took up culinary arts because of her mom’s influence.

“I guess food runs in our blood. Being exposed to the family business at an early stage made me decide that there wasn’t anything else I would rather do than be in a kitchen,” he says.

Tanco recalled what it was like when he was starting out as a chef.

“It was really difficult during my first job in Shanghai. There was a large language gap, the techniques are all new. I didn’t know anyone. Basically you’re on your own. Being raised sheltered and now being exposed to these things made me tougher.”

But, if he were not a chef, what would he be doing?

“I’ve always loved creating things. I guess I wouldn’t mind being an architect or an industrial engineer.”

Tanco reveals he’s partial to French food, the old style. Braised meats, non-garnished, served as is, is what he would find most interesting. Coming back from Cambodia, he has found another love of Indochine food.

Asked about the chefs he looks up to in the culinary arena, Tanco says:

This pizza dough is as simple as a basic ciabatta recipe. Rolling out to paper thin may be tricky try using a rolling pin. There are no rules on what shape your pizza may be so try having squares or oval shapes and once you serve it to your guest just tell them its rustic.

Mix all dry ingredients together and create a small well in the center of the mound. Add water and continuously knead until gluten has formed. Cut and portion to 250 g each. Roll into small ball shape. Cover with a towel and allow to rest for about 30 minutes. Once rested, flatten and roll out with a rolling pin until thin almost paper thin. Place toppings and bake in oven about 230-250 ºC for about 5-7 minutes or until cheese has melted and dough is nice and crisp. Serve immediately.

My favorite pizza. Simple yet very easy to prepare. You may purchase the Salsa Tartufatta in any Bacchus outlet. The combination of cream cheese and truffle paste create a new variety of aromatic flavor. Optional to add arugula in the end for simple spicy kick.

The most popular of all pizzas. It’s simple yet very delicious. I enjoy it using tomato from Baguio City, which has more juice and sweetness to it. Adding fresh basil is a must. Always get the fresh basil. Don’t settle with dried basil.

A pizza-like dish from Southern France, this is largely unknown in the Philippines. You will be surprised with the tartness of the cream cheese and the sweetness of caramelized onions, plus the addition of the anchovies that gives that extra kick on the taste buds.

For the caramelized onions: heat oil in a pan in a low heat setting. Add the sliced onions and a pinch of salt. Constantly stir until onions have properly browned and caramelized through about 45 minutes to an hour. Set aside.