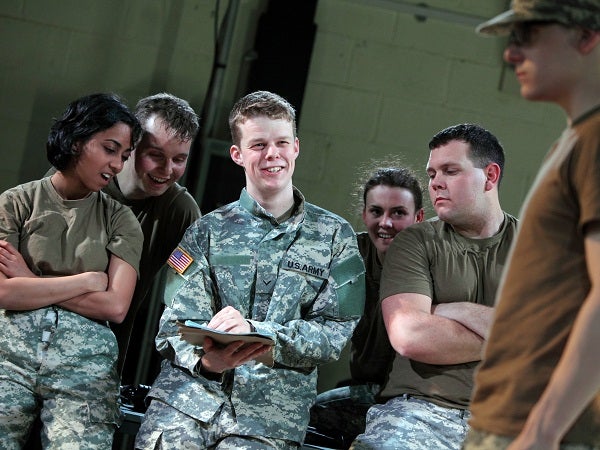 In this photo provided by the National Theatre Wales, on Friday April 20, 2012 Matthew Aubrey, center, plays U.S. Army Pfc. Bradley Manning in the play "The Radicalization of Bradley Manning." To some he's a traitor to his country, to others a free-speech hero. But before he was a public enemy or a cause celebre, U.S. soldier and alleged WikiLeaks source Bradley Manning was a high-school student in west Wales a pivotal period that is the subject of a new British play. AP/Farrows Creative/National Theatre Wales

LONDON — To some he’s a traitor to his country, to others he’s a free-speech hero.

But before Bradley Manning was a public enemy or a cause celebre, the U.S. soldier and alleged WikiLeaks source was a high-school student in west Wales — a pivotal period that is the subject of a new British play.

“The Radicalization of Bradley Manning” covers the four years that Manning spent living in the town of Haverfordwest. Playwright Tim Price says he was inspired to write the play when he learned that, like him, Manning had studied Welsh and endured high school rugby.

The play is being staged in high schools around Wales.

Director John McGrath said Friday there is interest from producers as far afield as New York.