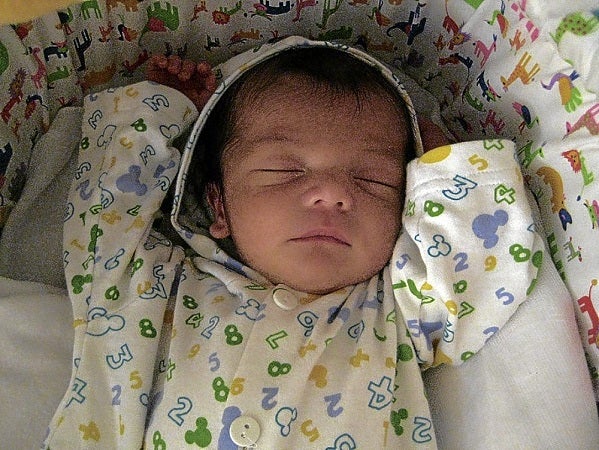 Maningning lives anew in the Miclat family’s season of rebirth

Forty, the age believed to be when real life begins, is what writer-painter Maningning Miclat would’ve been today. In September this year, it will be her 12th “angel year,” a tender euphemism that those who love and miss her use when they refer to her death.

In the autumn of their lives, her parents Alma and Mario are experiencing a form of rebirth with the coming two months ago of their first grandchild Maharadya, nicknamed Raj.

The new mother, Banaue, Maningning’s surviving sister, a teacher, singer, theater and movie actor, recalls a time “when I stopped thinking about my ate (older sister), perhaps because I was adjusting to pregnancy and all that. But since giving birth to Raj, there have been many occasions when I dreamed of going home with my husband Dominic and Raj. Home included ate. Alive! The other day, I was eating a piece of chocolate and thought, ‘Ate would like this,’ where over the years I would always think, ‘Ate would have liked this.’ I think she’s actively being present around Raj while his infancy still allows him to see spirits that our earthly adult life prevents us from accepting.”

Lola Alma experienced a high when she first held her grandson.

“It was such a beautiful, exhilarating, overpowering feeling,” she says. “I could feel all the love pouring forth from my bosom. Although I could see features of Banaue and Dominic in him, I could see a little Mario in his hair, eyes, nose, lips and ears, especially. It’s magic, a miracle!”

Retired since last November as University of the Philippines professor after serving as Asian Center dean, Mario shares his thoughts about grandparenting: “I do not plan about what kind of lolo I would be. I want Raj and his subsequent siblings to grow up to be patriotic even as they become good citizens of our global society. To become so, they should be well-disciplined from the very start. But what the heck! I might choose to spoil Raj and just let his parents do the disciplining and turning him into a patriot.”

Known for being frail (he has had three angioplasty procedures and a quintuple heart bypass), Mario chose to retire early, but not without inner resistance.

He says: “It was the first time in my life that I made a major decision in consideration of my personal condition. My life has always been first and foremost for country, for society, the nation, the people. If I had to relax from my always hectic schedule, believe it or not, I think, ‘What good would it do for the country? How would it enrich my understanding of our people?’”

After their return from exile in China in 1986, the Miclats planned their family vacations so they could visit Philippine destinations like Sagada, Palawan, Bohol or Batanes. Mario’s trips abroad had always been official trips for UP (research, lectures or discussions) or when he accompanied Alma in her international commitments. He adds that visiting friends and relatives had been incidental to his trips.

The only time he went abroad for a personal reason was when he and Alma attended Banaue’s graduation for her Master in Fine Arts studies at Brooklyn College in New York.

He was motivated to retire early because he wants “to live and see my grandchild. Masarap daw maging lolo. Paano kaya maging lolo para sa bayan? (I heard it’s wonderful to become a grandfather. What about being a grandfather for a country?) Ha ha!”

However, he still maintains a full schedule even if he is based in their sylvan home in Antipolo. He is writing another novel. He says his sched is like, “I am still regularly employed, working 9 a.m.-6 p.m. and beyond.”

He attends meetings of the National Commission on Culture and the Arts as head of its national committee for language and translation, and as a member of its sub-commission on cultural dissemination and the National Advisory Board.  Now and then he accepts invitations to lecture or join roundtable discussions about Philippine and Chinese society, culture and history in interested institutions. His schedule is full until December.

Still, the rewards of seeing the third generation do not detract from memories of Maningning, for whom a foundation named after her was formed in 2001. The poetry and painting competitions held in alternate years and not simultaneously have yielded a lot of good out of a tragedy.

Alma reports: “We feel pride that the Maningning Award encourages creativity in the young. The harvest of fine literary and artistic creations done by young artists below 28 is overwhelming, affirming that we in the foundation are doing something good. Previous winners in painting have carved out a name for themselves, winning other prestigious local and international awards like visual artists Dexter Sy and Raffy Napay. The 2007 winner in the Chinese poetry division, Chen Siyuan from Guangdong province, donated her prize money to the streetchildren in her community. The 2009 winner, Chen Liang, used his for his education.”

She adds that her late daughter’s poetry in English, Filipino or Chinese “has touched the lives and hearts of many young people. Two La Salle students did their theses on her. One master’s thesis was by Mary Ang, one undergraduate thesis by Michelle Sia. They wrote about Maningning’s poetry, her persona as a woman and as an artist. Both theses were adjudged the best. From the Far Eastern University, two students did their theses on Maningning, Rosalie Nimo and Chriselda Goling. They defended their theses with flying colors. All these warm our hearts.”

The pain of loss never goes away. Both parents shirk from the word “suicide.” (Maningning jumped to her death from the seventh floor of FEU.)

Her mother says, “I always have this shrinking feeling every time I read or hear the word ‘suicide.’ I have not really accepted it, especially since it’s very close to home. Ages ago, I would get annoyed at the person who did it, thinking it as a cowardly act of desperation, inconsiderate of loved ones left behind.

“When Maningning passed on, knowing what she was as a loving daughter, sister and friend, as a consummate artist and as a person who gave more than what she received, my mindset was completely changed. I now look at suicide with more understanding and compassion, although I still avoid using the word.”

Mario says, “I have long wanted to use the word ‘suicide’ to refer to Maningning’s death. Whenever I hear it, I still feel like being stabbed in the heart. Or imagine my brain exploding from a self-inflicted gunshot at the temple. I thought using the word might help the process of moving on. But in deference to Alma, who would not want to use it, I also avoided it. Anyway, I do not think a parent can really ever move on from such a harrowing experience. Life goes on, but there’s no healing.”

Alma adds: “Losing a loved one, and much loved at that, is a lifetime of loss, a loss of a lifetime. You will never be the same again and you have to live with the new you. The passing of years may soften the blow somehow, but there are triggers that will bring the pain back. How to deal with that will define the life you want to live.”

She continues: “The early years have been very difficult, but our deep love and respect for each other, our familial bond, our desire to keep Maningning’s memory and legacy alive, and our faith that God loves us and blesses us helped us in our journey. Twelve years after Maningning’s death, Mario, Banaue and myself have become closer and more understanding of each other. Our bond got stronger. Banaue’s marriage to Dominic Janssen on Oct. 10, 2010, and the birth of their son Raj on Feb. 22 gave us so much happiness. We look forward to another phase in our family journal.”

She refers to “Beyond the Great Wall: A Family Journal” that won grand prize in the 2006 National Book Award, biography category.

When asked if the couple had focused their energies on work activities at Banaue’s expense as they all dealt with their grief, Alma, who has been head of sales and marketing of Data Center Design Corp. since 1990, admits, “Oh yes, perhaps, at the beginning of the foundation when there were birth pains. I was busy talking with friends who were willing and would love to be part of the foundation’s board.”

The Maningning Miclat Art Foundation has Meynard and Linda Halili, Herman Gamboa, Ding Ramos, James Na and Edna Manlapaz on its board of trustees.

She continues: “Banaue was 21, so young. If I was grieving as a mom, she was also grieving as a sister. Mario was grieving as a father. But he has always been fair in dealing with the two girls. Sometimes he would call my attention if he thinks I’m favoring one over the other. Thanks to him and to Banaue’s maturity, which I think she gained overnight when Maningning died while we were away in the US, my conflict with her was short-lived.  Most important of all, there was a common denominator: We love Ning to pieces.”

Mario explains how being the fourth or middle child of seven siblings as he was growing up enabled him “to be respectful of my elder siblings although they might not be respectful of me. At the same time, I must be tolerant with my younger siblings although they might not be tolerant with me. My parents tried their best to be fair with us and treat us equally. Sometimes favoritism manifests itself. This background helped me in my resolve to be always fair.

“I think I have an extremely great capacity to be fair in dealing with people. That includes my two daughters. I am quite sensitive when Alma seems to favor one daughter over another. I remind her that parenthood should not be a contest between the better and the worse child. Only once in an argument a long time ago did I declare that if one should be her Maningning, then the other should be my Banaue.”

That their Ning would’ve been 40 today makes Alma state firmly, “We really never lost her. We just lost her physically. We still feel her. I have never stopped thinking of her every day. She lives on in all that we do that carries her name. With the coming of Raj, we are looking at our lives anew. Perhaps, we’ve only just begun, as the song goes.”

Visit www.maningning.com for announcements on this year’s painting competition.