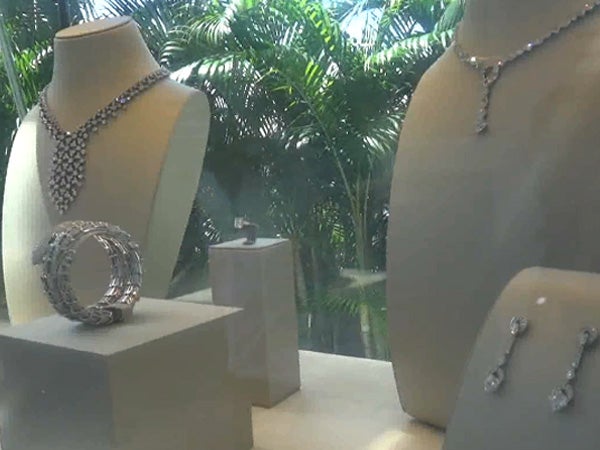 For the first time, Bulgari brings its High Jewellery Collection to Singapore where the media from all over Asia can gather and see up close the color and glitter of these diamonds, precious and semi-precious stones that cost up to hundreds of millions of pesos.

The Bulgari High Jewellery Collection was on display last week at the Presidential Suite of the Fullerton Bay hotel at Marina Bay. The Inquirer was the only broadsheet and online media from the Philippines.

Easily the star of the collection was the 36-carat emerald pendant dangling from diamond necklace estimated to be S$5 million.

In fact, however, the star of the collection of exquisite jewels is the heritage of stone selection, craftsmanship and innovation that has been the mark of Bulgari for more than a century.

Bulgari jewels are created from exceptionally fine gemstones which Bulgari has sourced, through the century, from all over the world—emeralds from Columbia, sapphires from Kashmir and Sri Lanka, rubies from Myanmar (sourced on the international market), for instance.

The High Jewellery collection consists of one-of-a-kind ornaments representing the quintessence of Bulgari design, its sense of volume and use of precious materials. The collection has more than 1,600 pieces, displayed on rotation in major Bulgari stores worldwide.

At the Fullerton Bay in Singapore, among the eye-grabbers were a yellow gold necklace with pink and blue sapphires (132,19 carats), emeralds (24,10 carats) and round brilliant cut diamonds (34,93 carats);

Platinum earrings with pink sapphires and pear-shaped diamonds and round brilliant-cut diamonds;

Pink gold bracelet with mother of pearl and round brilliant-cut diamonds.

The night before the exhibit opened, the media were welcomed in the rooftop poolside of the Fullerton Bay which was transformed into a lush tropical setting that sparkled with lights and lanterns amid the Marina Bay skyline.

As food and drinks were served, models showed off these high jewellery pieces.

How a unique jewel is created is an interesting process that’s also enhanced by knowledge culled from Bulgari’s more than a hundred years of traditional excellence. The key element is the stone or set of stones that composes the jewel. The creative process begins with the cut, carat weight and color of the gems. The design exploits the stone’s characteristics.

In the case of diamonds, Bulgari uses cut stones only and collaborates with highly select suppliers from countries that comply with the Kimberly Process.

The creative process of designing a jewel is extremely long and complex since many designs have to be drawn up before the final choice can be made. The initial idea is elaborated by a team of designers working under the guidance of Paolo Bulgari, chairman of the Bulgari Group.

The distinctive and immediately recognizable mark of Bulgari style is the use of colored stones. Since the ‘60s, Bulgari jewels have been noted for original combinations of colored, precious and semi-precious stones.

The use of semi-precious gems such as tourmalines, amethysts, citrines, coral, pearls and garnets, frequently combined with rubies, emeralds and sapphires, has enabled Bulgari to draw on a far-wider range of colors than customary, including new and unusual tones of violet, pink, and intense reds, greens, oranges, and yellows. The result is a nearly infinite variety of chromatic combinations, from the most vivid and contrasting to the most delicate and nuanced.