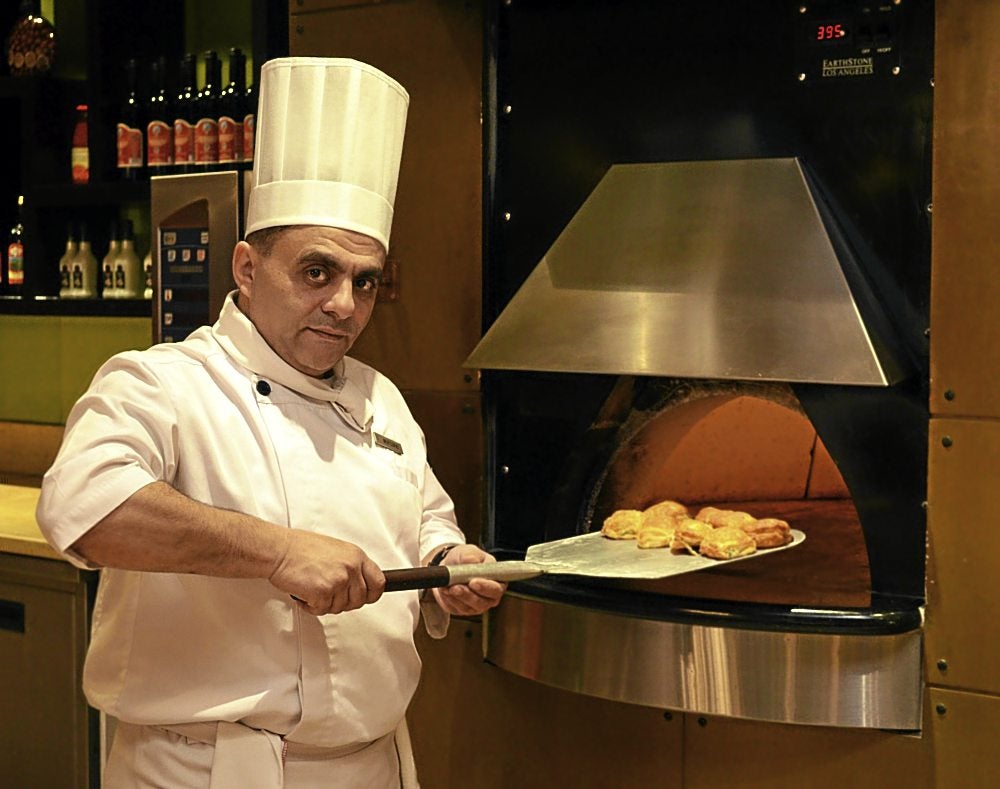 “Vegetable eaters!” That’s how Lebanese are called according to Claudia Roden, author of “A New Book of Middle Eastern Cuisine” (Penguin Books, 1985).

Lebanese chef Malek Elsafadi confirmed that proudly. Lebanese food, he asserted, is 75-percent vegetables. Which is why, he said, Lebanese women are always admired for their beautiful skin. It’s the vegetables in the diet.

Elsafadi is the Middle Eastern chef at the New World Hotel’s M2M Café in Makati. From Monday to Saturday, the international buffet at lunch and dinner carries the cooking of Lebanon, Syria and Jordan, all certified halal, done by this Lebanese chef.

His family name is also the name of the family restaurant. His bent towards cooking is because of his mother, who he says cooks authentic Lebanese cuisine, traditional recipes like slow-cooked lamb stew called kleftiko, which has a funny history. It’s supposed to be lamb stolen then cooked inside a mud hole so that there is no steam to give away the place of cooking. The name and its history remains, although the lamb is no longer stolen.

It was also his mother who approved of his going into cooking instead of his going into the military, which his father, a high-ranking military officer, had wanted. Elsafadi finished culinary studies in Beirut and started his career buoyed by “passion rather than obligation.”

At a special preview, chef Elsafadi made six courses for a total of 18 dishes.  Even if I had eaten as much in Dubai at a Lebanese restaurant, I was still overwhelmed by the number especially since the cold appetizers and salads were already set at the middle of the table.

Three Lebanese salads confirmed the vegetable part of the cuisine, all with a dressing of olive oil and lemon juice. Tabouleh or parsley salad should be the most familiar. The cabbage salad indicated what it has, but the one with cucumber is called Arabian.

Cold appetizers were mostly dips of which hummus and mutabal, made of chickpeas and eggplant, respectively, are already known to most diners. The discovery that day was the labneh with garlic, a dip made by filtering or straining yogurt overnight in the refrigerator, refreshing and, well, healthy. Of course, that will mean you don’t overdo the bread consumption (e.g. pita, lavash), and you will because these are freshly baked by the chef. Then there was moujadarah safra, a dip made of lentil, and lubieh bel ziet that looked more like a salad made with green beans.

Hot appetizers began with chicken liver, which made me smile because it was the most memorable of the dishes in Dubai. Why is it that Middle Eastern cooking makes liver taste so good? Then there were the meat pies, very much like our empanada. And a dish curiously named chicken wing Provençal, which the chef explained was Mediterranean, stressing how the Middle East is part of that region and how many places in Lebanon took on French names when the French occupied the country.

Soup of lentils came next, and then the main courses, which, by the time those arrived, we felt too full to really enjoy, such as the lamb oriental rice, chicken shawarmah and grilled seafood.

Fresh-cut fruits made the chef reminisce about the many fruits Lebanon has and how these are sold in wholesale quantity rather than per piece. The country, he claimed, can boast of the biggest grapes and watermelon that can weigh as much as 35 kilos. Dessert also included Baklava and um ali, their version of bread pudding.

But while he pines for home, chef Malek Elsafadi considers this country his home, too, since he has been working here since the ’80s under the likes of chefs Billie King and Roland Fitz.

And his expressions reveal just how long he has stayed here, his conversation spiked with Tagalog words like “ano ito.” He loves guinataang isda, Bicol Express, adobo and pinakbet. Of our cooking, it is chicken inasal that he says is similar to Lebanese marinated chicken.

In spite of the long list of dishes he will do at M2M, he still hopes he can do the vine-wrapped appetizer. There are no suppliers of vine leaves, he said. But he will be cooking and explaining to guests dishes they may not know. Looking at the menu, it would indeed be good to know and taste what rikakat is, and the dessert, sfouf.