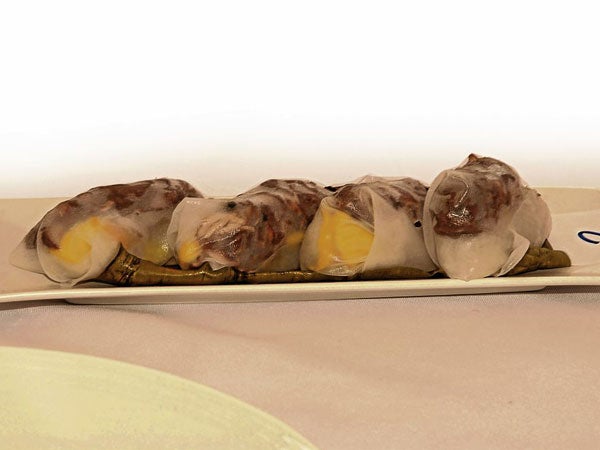 Adobo in all its forms took center stage at the “Adobolympics” of Makati’s Legazpi Sunday Market to mark Independence Day three Sundays ago.

Twelve teams battled it out for the first-ever Adobolympics Torch and the bragging rights for having the best adobo in the market.

First place went to Team Maria Clara, a husband-wife-daughter group, for its rendition of Chicken-Pork Adobo with sticky rice, ripe and unripe mango, all secured in rice wrapper. They brought home P20,000 cash.

“People’s Choice Award is a posthumous tribute to Kalaw, one of the market’s beloved vendors and an icon in Filipino cooking,” said Anya Santos-Uy, event coordinator. “The award was for the team that pleased the market-goers’ palates the best.”

Each team was composed of three members with a Philippine-inspired name. Each group submitted two main dishes (consisting of meat of its choice and a 2.5 k of lamb) and two side dishes which were prepared in their entirety at the market. They were given three hours to work on their dishes.

All cooking equipment, cutlery, dish towels, utensils, plates were provided by the team.

Uy said there were 34 team-applicants for the cook-off, but the organizers had to trim them down to 12 to make it manageable in terms of logistics, time and space.

Judges were amazed to see the creativity of each group and countless ways to whip up the quintessential dish. Some put sukang Iloko, others apple cider vinegar. One team also used pineapple juice as its curing liquid.

Aside from chicken, pork and lamb, some teams used prawns, fish and crabs cooked with Spanish, Italian, Mediterranean inspirations. Nobody dared to use any game meats.

There were teams that served adobo with risotto and spaghetti.

Sauce is the key

More than anything, the judges were actually looking for a good blend of adobo sauce. Lumen observed that some of the teams didn’t give much attention to the adobo sauce. Some of them even cooked their adobo in high heat.

“They didn’t give us enough adobo sauce to taste and judge,” said Lumen. “For me, the most important in adobo is the sauce. Even when you say adobong tuyo, there should still be oil or fat in it. If you’re going to stew any meat, there has to be fat. But, if you’re scared to eat the fat, take it out just before you serve it. Otherwise, your meat is going to be dry.”

“We also noticed that all their heats are in medium, not low. It should have been really simmering or slow cooking.”

But, what really makes an adobo, adobo?

“Adobo is not a dish but a manner of cooking,” Lumen said, who wrote with Ronnie Alejandro the best-selling book, “Adobo.”

“To call it adobo, it has to have an equation of an acid, garlic, peppercorn and rock salt. To color it, you can add soy sauce or to make it really saucy add soy sauce and water. If you take out the vinegar it’s still an adobo for as long as you have an acid in it. The acid is the factor. Any acid that can cook the meat and that will tenderize it in slow-cooking can be an adobo. But then, it’s just like paksiw if you rely on acid alone.”

Adobo is slow food. It has to be simmering in low heat. The bubbles should be on the side of the pan, not boiling in the middle. It should be well-covered so that it will cook under its natural pressure. No need for a pressure cooker.

Despite the lack of sauce or the “deconstructed” treatment of the adobo presented by the participants, Lumen was still pleased to see the ingenuity of each team.

“We were really happy,” said Lumen. “We have to encourage them to jazz it up so that the presentation will change and it will have a different appeal to different people. We always have to keep in mind that the audience does not know adobo yet. They’ve heard about it but when they see something brown they’re scared to eat it. We need diverse presentation. And these kids are the key to the global approach.”

Champion team Maria Clara was led by Ivan Maminta with wife Rossana Unson and daughter Alie. This is the first time they joined a cooking competition as a family. It was the wife’s idea to join the cook-off since they all had an interest in adobo.

Maminta works as a chef at Brasserie Boheme in Salcedo Village, Makati. Rossana is marketing manager of a garment company and loves to cook as a hobby. Alie bakes in between school (Colegio de San Agustin) and other house chores.

“Our adobo recipe was inspired by Maria Clara or at least what we think her personality was,” said Maminta, a graduate of Ecole Les Roches Suisse. “Maria Clara, meaning the richness and tenderness of a woman represented by the adobo meat; the sweetness and sourness of a woman represented by the mangoes, wrapped in a terno, which is the rice wrapper.”

Their chicken-pork adobo was meant to be a little dry and quite sticky that added magic to the dish. They used cane vinegar for the adobo. They arranged the adobo meat with the ripe and green mango slivers alternately next to the sticky rice, rolled it up in a rice wrapper tightly.

Team Tierra Adorada was led by Isaiah Ortega with members Carina Lau and Pamela Acha. Also known as the Team Hardcore, the group has been joining various cooking competitions for more than a year now, including last year’s Grilla in Manila.

Adobo X was composed of Lord Ancheta, Aksana Kalinich and chef Mark Powers. They currently have a stall at the Legazpi Market named Kalinka where they serve gourmet Russian food. They intended to surprise the judges and guests by bringing European flare to classic adobo recipes.