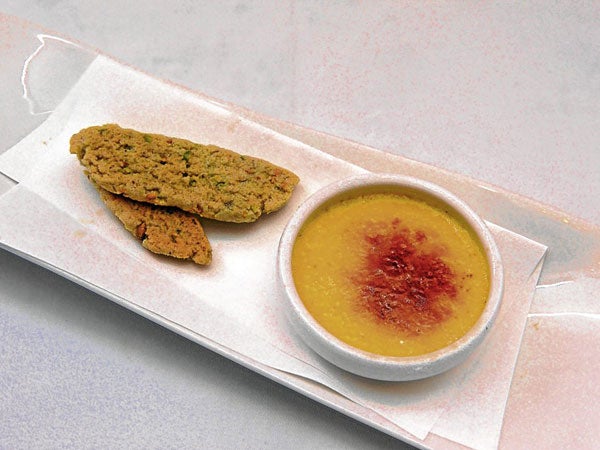 French cuisine with a Pinoy twist

South African chef Hylton Le Roux describes “Pan-Asian” as modern European cuisine with a local spin. He recognizes that Filipino food has a distinct sweetness, even the savory ones, so he makes his French dishes in the Philippines a little sweeter, spicier.

Le Roux is the second featured chef in The Establishment’s guest chef series. His Pan-Asian menu is available until July 16 at the club’s Crystal Room restaurant in Bonifacio Global City in Taguig.

“My specialty is French and Italian food,” he said. “I tried Filipino favorites like adobo and sinigang to know how to make authentic European food presentable here. I used French techniques, but added sweetness and more flavorings to keep it from being bland.”

Diners may warm up with a soup of Roast Butternut with Asparagus Spears and Truffle Oil or Broccoli and Watercress, made richer by poached egg and crispy bacon.

Working as chef de partie under celebrity chef Gordon Ramsay strengthened Le Roux’s knowledge in the kitchen. They worked together at the Savoy Grill in London, the Michelin-star restaurant of the Savoy Hotel.

Le Roux’s tips to would-be chefs: “Work hard, focus. Some students think you just get a certificate from a culinary school, then put up your own restaurant right after. You have to start from the bottom, understand the kitchen. Have passion.”

Le Roux also worked in the popular restaurant the Fat Duck. He has been in the Philippines for a while, and has taught Modern European cooking in the Center for Culinary Arts in Katipunan, Quezon City. He was the executive chef for Ayala Alabang Country Club, until he put up Pi Catering this year.

Diners may finish off with desserts such as Crème Brulee with Pistachio and Almond Biscotti and Dark Chocolate and Espresso Mousse with Whipped Cream and Toasted Almonds.