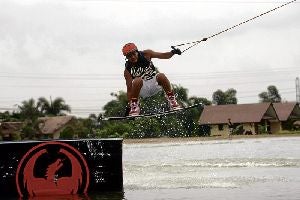 He wants to run faster marathons–and bring in more tourists

LUIS RAYMUND “LRay” Villafuerte Jr. shook as he stood on a thin board made of graphite and fiberglass, his feet in binders, while a boat hauled him across the water. It was his first attempt at wakeboarding, upon the egging of his two sons who were seasoned wakeboarders. This was way before he became the youngest governor to be elected in Camarines Sur in 2004. 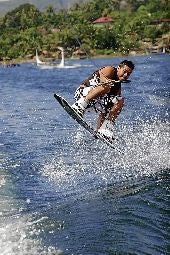 “The first two hours were frustrating. I could not balance. My body ached. I must have drank two gallons of water. My kids kept teasing me,” recalls the exporter-turned-politician.

Wakeboarding is akin to surfing or waterskiing behind a speeding craft. One executes gravity-defying tricks over the ridges on the water, called wakes, made by powerful boats. Villafuerte says it takes core strength and strong legs to balance oneself while being pulled by the boat. The self-taught wakeboarder figured out the technique: “Just bend your knees and hold tight. At the start, I was letting myself be pulled. To keep your balance, you’ve got to counter pull.”

Subsequently, Villafuerte started teaching. “Anybody can learn,” he says. Students master how to get up, counter the wake, learn various positions and, if one is daring enough, jump. He has taught such celebrities as Joey Marquez, Paolo Paraiso, Angel Locsin, and even 76-year-old Conchita Lao, whom he says is a natural water-skiier. 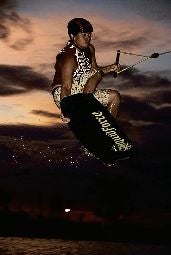 Pushing 43 in June, he does cross-training at the gym. “In wakeboarding, you have to take off your shirt,” says Villafuerte. “The sport makes your stomach smaller and your upper body bigger. You gain confidence from feeling fit.”

A veteran of world championships, he has impressed the crowd as he flies several feet into the air and spins before landing on the water. For two consecutive years (2008 and 2009), he won third place in the World Wakeboarding Association Championship veterans category (over 40). “The key is not to get scared. If you are nervous, you will fall. Some try too hard that they lose balance and, consequently, the points.”

The passion for his sport drove him to overhaul the image of his province, from backward to cool, attracting a younger and adventurous market.

“Before, Camarines Sur was associated with typhoons and NPAs. I wanted to promote it as a hip destination. Tourists like two-syllable names like Cebu or Bora. CamSur sounded good. I thought of the marketing slogan, ‘Come South, CamSur.’” Last year, the Department of Tourism cited CamSur as the destination of the year, posting 53-percent growth in tourist arrivals, beating Boracay and Cebu. Today, CamSur has been named in prestigious wakeboarding magazines as a must-go. While other countries in the world offer wakeboard parks, Villafuerte outdid them. Aside from developing a wakeboard park run by a German, he built a hotel, massage area and clubhouse. The facilities are ideal for both professionals and beginners.

CamSur beat Florida, the cradle of the sport, in the bid to host the World Wakeboarding Association championships in 2008. Over 300 participants from 29 countries joined the event. The foreign guests were so impressed that Villafuerte didn’t have to bid for the 2009 championship. “The wakeboarders were first-time visitors. They returned in 2009 with friends and family,” he says.

Villafuerte says sports tourism lures repeat visitors. “When people take up this sport, they want to learn more, so they keep coming back. How often would you want to see a tarsier or a volcano? With a sport, you want to enjoy it everyday or every month. That’s the beauty of sports tourism,” he says. The tourist market is young, ages 17-25. They stay from two to six months just to be in the waters.

Lately, Villafuerte took up the triathlon and has been working with former Olympian Lance Watson as his coach. When he’s in Manila, he bikes in Metro South and runs around the subdvision. “CamSur is still the best. There’s the lake, the scenic bike routes, and the fresh mountain air.” His first foray was a 21K run in Bangkok last December, with a running time of two hours and 25 minutes.

He is girding for Ironman 70.3 this August. But being a novice, he plans to join the running part in the relay race.

Villafuerte says the province has been rated in blogs as one of the best places for triathlons in the world. The participants are taken care of, from arrival to departure. “It’s like an Olympic village where they stay close to the area, unlike in other places where they have to go far to the lake or beach. All the athletes in the village interact,” says Villafuerte.

The athletes love the warmth of the Filipinos. One Mexican had a flat tire and somebody offered him a spare. But when he got a second flat tire, he asked for help, and the Filipinos offered him a spare tube. During the awards, he said he was touched; he would not have finished the race were it not for the kindness of the locals. “Other athletes want to give up, but the smiles of our people inspire them to move on. This doesn’t happen in other countries,” says Villafuerte.

Meanwhile, the governor is aiming to push all the limits—be it in wakeboarding scores, marathon time, and tourism arrivals.