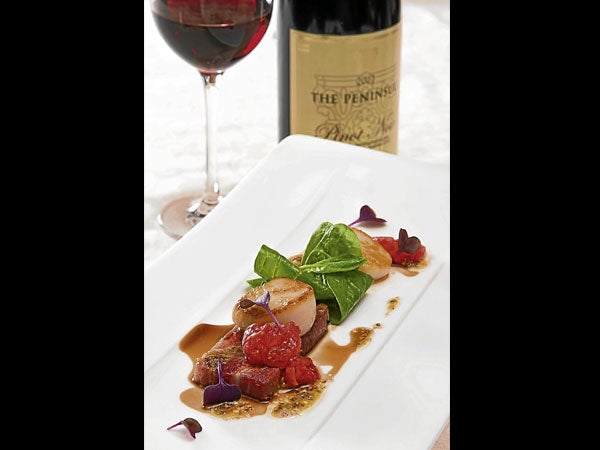 Manila Peninsula has a new chef—Samuel Linder. Some of you may know him from Aubergine fame, and if you do, expect plenty of good things.

Linder, originally from the small village by the lake of Brienz in the center of Switzerland, is now Old Manila’s chef de cuisine.

For 10 years, he was head chef of the Swiss army, leading a team of 12. He has also worked at Conrad Hotel in London, Burj al Arab in Dubai, and Aubergine and ISCAHM (International School for Culinary Arts and Hotel Management).

So how does one revise a menu very familiar to its regular clients?

“There are some classics I kept such as the Rossini and Surf and Turf,” Linder said. “However, I changed or transformed most of the dishes based on the availability and quality of food products.”

Linder said he believes that the main ingredient, be it lobster or steak, should be the star. He explained he cooks his food accordingly, choosing the right cooking techniques to accentuate flavor, texture and color.

We were recently treated to a night of taste-testing his newest menu additions. We started with a small bite of Pounded Sako Tuna with Roasted Lemon Cream, accompanied by a tasting portion of Pan-seared Foie Gras, a combination Linder loves both in terms of taste and texture.

The second course was an Alaskan king crab served two ways. One was a hot, creamy cake and the other a cold dish topped with compressed fruit tartar, both served with Golden trout Caviar.

Our main course was a Duo of Australian Lamb, cooked perfectly pink and juicy and accompanied by potato gratin, eggplant caviar and zucchini and chorizo ragout.

This was followed by Caramelized Goat Cheese with Truffle, scented honey, bourbon, vanilla crème fraiche and blueberry compote, or in other words, heaven on a plate.

Lastly, dessert was a wonderful surprise of Dark Swiss chocolate bar served with orange, sprinkled with Peruvian pink salt and rose peppercorn. It was a wonderful medley of unexpected flavors that was a perfect ending to an already satisfying meal.

For those planning to visit Old Manila, expect familiar tastes with unexpected twists and turns that will never leave your taste buds bored.

Linder is a fan of Filipino food, singling out adobo, sinigang, kaldereta and chicken tinola among his local favorites. “I love the tuna, lapu-lapu and prawns here,” he said. ” I realized if you source the products right, you will be satisfied with the quality and value for money.”

“The same goes for salad greens and veggies,” he continued. “I am constantly in touch with organic farms to find out what can be grown locally to lessen having to import products and also to help the local economy.”

“I often eat sandwiches, maybe because of the stressful job and not enough time to eat,” Linder said. “At home I love clear soups and pasta.”

Linder has always been fascinated with flavors and food and was motivated to cook at home at a very young age by his father, who was the main cook in their house. “The final decision to become a chef was more of a coincidence,” he said. “I needed to do something with my hands where I needed to be under pressure.”