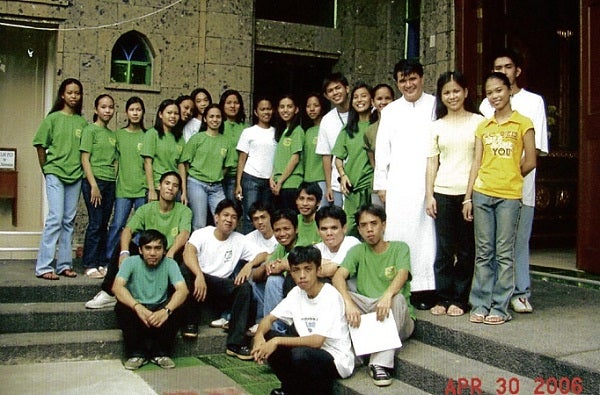 Miracle prayer from ‘Straight from the Heart’ causes healing

It came as a surprise to Rev. Fr. Mario Ladra, parish priest of San Lorenzo Ruiz Church in San Jose del Monte, Bulacan, that “Straight from the Heart,” the prayer book he put together in 2007, would produce miracles for people who pray from the book incessantly.

Published by St. Paul’s Publications, the book collects various prayers according to one’s needs. Like “a pebble thrown into a stream of water,” to quote Mother Teresa, the good that this prayer book brought about is producing “ripples of water going round and round on the stream.”

The Doña Consuelo “Chito” Madrigal Foundation and San Lorenzo Ruiz Charities, of which Ladra is president and executive director, manage the distribution of the book to outlets like National Bookstore and St. Paul’s stores. Proceeds from the sales go to several beneficiaries such as 70 college scholars, the feeding of 255 schoolchildren from depressed areas every day, and support in the formation of seminarians at the St. Vincent Ferrer Seminary in Jaro, Iloilo; St. Joseph Regional Seminary in Jaro, Iloilo; San Lorenzo Ruiz Mission Institute and Immaculate Conception Major Seminary in Vigan, Ilocos Sur.

Rose Ann Policarpio from San Jose del Monte, Bulacan said: “Our first baby, Noreen, was born with multiple congenital defects involving the heart, cataract at the right eye and deafness on the left ear. That was really painful to me and my husband. At first, we were so depressed and could not understand why this thing had to happen to our child. But despite this trial, we kept our faith in God and prayed very hard, using the ‘Straight from the Heart prayer book. We prayed most especially the ‘Miracle Prayer’ and healing prayers there, Noreen was miraculously healed by God. Sincere prayer really works. Nothing is impossible with God.”

“My uncle, Alvin de los Santos, resident of California, was sick of kidney cancer, stage 4. When I came to know about it, I gave him the prayer book ‘Straight from the Heart.’ He kept using it and prayed most especially the Miracle Prayer.

“On July 9, 2010, his doctor told him that his cancer was healed. My uncle was very happy telling everyone how God healed him through the power of prayers.”

Zeny Nuguit, who lives in Houston, Texas gives testimony of being healed from anxiety attacks:

“Since I was a child, I had anxiety. I could not be alone in our house, and this continued until I got married and had children. I was advised by the doctor to have a psychiatric treatment, but I refused. One day, my friend gave me the prayer book ‘Straight from the Heart.’ I started praying the Healing Prayers and the Miracle Prayer. They worked so powerfully that I am now totally healed. Even my doctor was surprised about this miracle. Faith and prayers truly work wonders.”

“I suffered from a raptured aneurysm in 2010. The doctor told me that it was a very fatal disease with a survival rate of 3 out of 10. During the time of my operation, my family kept praying, using the book of prayers,  ‘Straight from the Heart.’ The Miracle Prayer was very powerful. The operation became very successful and my recovery was fast. I was truly healed by God. I claim it in my heart that nothing is impossible with God. Just believe and call on Him. He is the God who heals. Praise the Lord!”

Ever heard of a community called “Salt of the Earth”? They are a group of consecrated women dedicated to spreading God’s gift of love. They are the Dominican Sisters of the Regina Rosarii. One of its founders is Sister Eppie Brazil who’s a former member of the Dominican Sisters of the Most Holy Rosary of the Philippines. Their Congregation has heard a great calling, which is to continue serving people. Their ministry conducts retreats, recollection and seminars, accompany groups in contemplative prayer and devotion to Mary, Regina Rosarii, and socio-pastoral work.

Pilgrimage to the Divine Mercy

Sister Eppie will lead a pilgrimage to on May 19 holy sites to Eastern Europe holy sites such as the Divine Mercy in Krakow Cathedral, Church of Our Lady of Victorious to see the image of the Infant Jesus, the Convent Chapel of Saint Faustina and St. Stephen Cathedral.

Fr. Reynaldo Floresca, parish priest of San Vicente Ferrer church in Dinagat Island near Surigao City, has been trying to make bigger the church which was just a chapel when he arrived two years ago. Specifically situated on a small island of Rizal (Basilisa), the parish was once a mission area of the SVD Fathers who turned it over to the Diocese. Fr Rey is the first parish priest. Trying to build the church “bayanihan style” because there is no money for salaries, but give free lunch to the workers instead, the church s growing slowly. The parish needs donations of building materials like cement, lumber, etc.  If readers want to donate money, so much the better, so there is money to buy rice and vegetables and fish to cook of lunch.