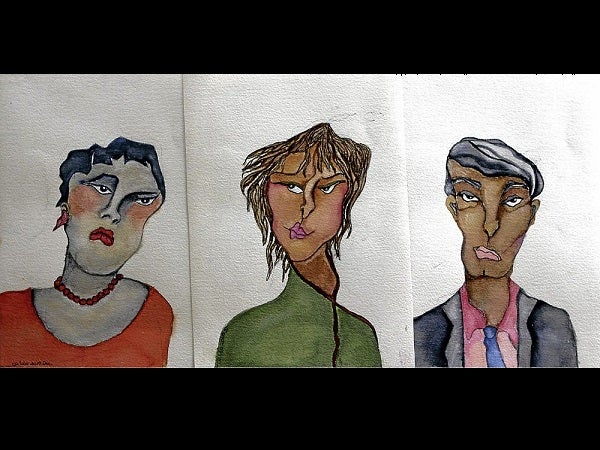 I used to hate my birthday parties as a long-time only child. I had one each year yet none of them was really for me.  In the ’30s, birthday parties for children were an excuse for adults to get together.

A 7-year-old child got gifts like yards of cloth (who cares?), sandalwood fan, veil or box of handkerchiefs (yuck!). No one ever gave a toy or a gameboard or anything interesting like Star Checkers (with marbles) or Fiddlesticks (a bunch of pointed sticks with vari-colored tips) or Trip-to-Heaven (a printed game board on which your marker could travel slowly to “heaven” with every roll of the dice). Not a nice set of paper dolls or even a measly set of jackstones!

Only my tia Lourding’s gift was always to look forward to. She gave me young reading matter about a growing girl named Betsy. And every year I got the following edition where Betsy had grown a little older.

Actually, you couldn’t blame the oldies. There was hardly anything ever made for growing kids. In fact my own daughter, many decades later, had to wear her brothers’ hand-me-down shorts because there were no girls’ “tweener” clothes to be bought.

Even food for kids’ birthdays was meant to impress the parents – like a chicken relleno and lengua with a brown sauce and Russian salad, ugh. Spaghetti had not yet invaded the world and hotdogs were considered too American, not filling enough. If your mom knew how to bake a cake you’d have a birthday cake with candles. There weren’t any shops you could run to for orders.

Of course people who followed magazine trends knew how to do real children’s parties, like my tia Lourding. I have a picture of Ramy’s birthday with everyone wearing paper hats with fluted decorations and tinsel décor. And the Rufinos Senior, who were friends of my folks, who invited me to Connie’s birthday, had the works including sponge cake and ice cream. They had a cook who could bake cakes and they had Chinese amahs and all that. Non-rich kids had birthday parties like mine or none at all.

Of course my mother bought me dolls for my birthday but they weren’t really toy toys! One was a set of five dolls representing the Dione Quintuplets, the first quints that ever survived. They became celebrities and their names were Marie, Cecile, Emily, Annette and Yvonne. The names were engraved on medallions pinned on the dolls’ sunsuits (with matching sun bonnets).

Our five dolls were riding a merry-go-round. (In another set I saw, they were riding a ferris wheel.) It must have cost my parents a pretty penny because they had a special square glass case made for the dolls. That technically made them non-toys, because fat chance you could play with them.

On another birthday I got a Shirley Temple doll. There were several sizes of Shirley Temples from 10-inches to two feet tall. Of course, being an only an child, I received the gargantuan one.

The doll had blonde sausage curls, but nylon had not yet been invented, so the flossy silk curls could easily become matted and look like a mop. So my mother put a thin hairnet on my, or rather, her Shirley doll’s locks. Come now, how could you play with a doll in a hairnet wearing a white pleated dress and socks that  slept in a long box in mama’s aparador?

So I wasn’t particularly eager about birthdays and birthday parties. Until I married a guy who seldom had one. He set me back on the right track.

Well, nobody is ever born at the right time. You are either too young or too old for something. Today it is the opposite of my childhood days. Everything is geared toward the youth, especially teenagers. Try going to the Women’s Wear section and see if you can find a nice pair of slacks with a waist in the proper place. It is usually below the navel. All nice bras plunge to kingdom come and all nice bathing suits are bikinis. So if you’re old and really fat, your best bet is the maternity section. As for canes, they are either for men or three-pronged steel ones for orthopedics. Nothing for limping old girls who still like to look hip.

I’ve had to accept unhemmed blouses and skirts as a normal and even “in” thing. Once I bought myself a real avant-garde blouse off a Young Designers’ rack. It was diamond-shaped and had three holes. It took me several tries before I could stick my head into the correct hole. The maids couldn’t stop laughing. So even when I finally got it right and looked great in it I still felt insecure.

Well, it’s either you join them or you put on your wedding dress and die. Not quite my trip—yet. I plan to die with my red boots on.