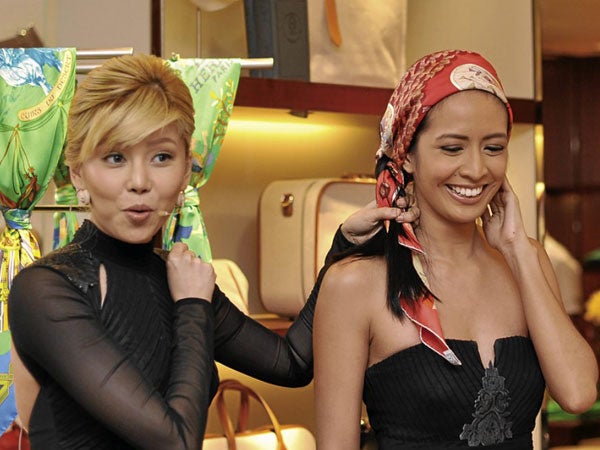 How to make your Hermès scarf an everyday fashion accessory

Hermès Silk scarves do not come cheap. But the fashion-fastidious know they’re worth every hard-earned currency.

As part of Hermès’ global campaign celebrating the brand’s long tradition of craftsmanship, Mario Katigbak, the brand’s GM in the Philippines, recently showed lifestyle journalists the many ways the Hermès scarves could become everyday fashion accessories.

Bianca Valerio, the evening’s host, and Valerie de los Santos made use of Hermès scarves in different sizes and prints to fashion almost anything, from necklaces to belts, shrugs, halters, handbags and makeshift dresses.

Apart from scarves, Hermès also designs scarf rings and short leather straps with D rings on both sides. The latter is ideal for fashioning scarves into belts.

By pairing and knotting two 140s, Valerio and De los Santos were able to come up with a halter dress that doubled as an overlay. Smaller scarves can be knotted strategically and turned into a necklace.

Hermès also offers a line of smaller, less showy scarves for men. Although they’re ideal for warding off the cold, scarves can now be used all year round as shown by the two models.

Each scarf comes with a small box of “knotting cards” composed of how-to illustrations and actual pictures of finished “products.”

To give your Hermès Birkin a more summer vibe, for instance, you can temporarily replace its leather strap with an Hermès scarf. With a number of strategic folds, knots and twists, you can even turn the scarf into a handbag or shoulder bag. The latter, of course, would require using a bigger scarf.

“It’s part of Hermès’ world-wide thrust focusing on craftsmanship,” said Katigbak. “If you look at the scarves’ colors, they’re all brilliant no matter how subdued the shades are. Since each scarf has 46-48 shades, it means that the silk fabric used to make one has to go through silk screening 46-48 times.”

Hermès scarves, unlike some of its bags, aren’t numbered. But in his desire to give clients a sense of exclusivity, Katigbak has purposely limited his orders to three of a kind. He promised not to reorder the same print once it’s sold.

Katigbak is also planning to mount an exhibit next year highlighting scarves and the progression involved in printing them. Based on Hermès’ global thrust, the brand plans to focus next on enamel, before culminating in leather goods, which includes the iconic Birkin and Kelly.