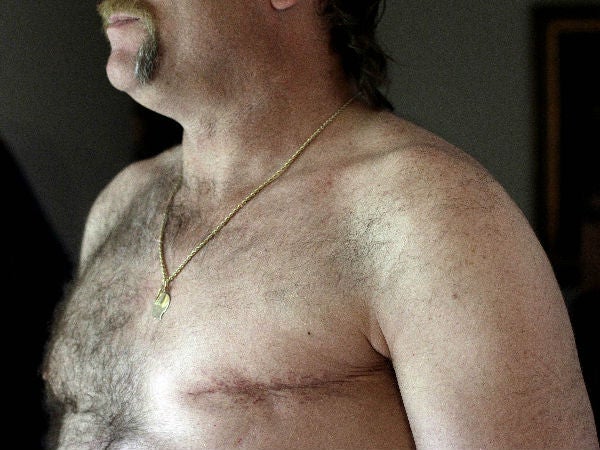 In this May 3, 2012 photo, a surgery scar is seen on breast cancer survivor Robert Kaitz's left breast in his home in Severna Park, Md. Kaitz thought a small growth under his left nipple was just a harmless cyst. By the time he had it checked out in 2006, almost two years later, the lump had started to hurt. The diagnosis was a shock. "I had no idea in the world that men could even get breast cancer," Kaitz said. Now Kaitz does frequent self-exams and has mammograms every year. The American Cancer Society estimates 1 in 1,000 men will get breast cancer, versus 1 in 8 women. AP Photo/Patrick Semansky

Breast cancer is rare in men, but they fare worse

CHICAGO — Men rarely get breast cancer, but those who do often don’t survive as long as women, largely because they don’t even realize they can get it and are slow to recognize the warning signs, researchers say.

On average, women with breast cancer lived two years longer than men in the biggest study yet of the disease in males.

The study found that men’s breast tumors were larger at diagnosis, more advanced and more likely to have spread to other parts of the body. Men were also diagnosed later in life; in the study, they were 63 on average, versus 59 for women.

Many men have no idea that they can get breast cancer, and some doctors are in the dark, too, dismissing symptoms that would be an automatic red flag in women, said study leader Dr. Jon Greif, a breast cancer surgeon in Oakland, Calif.

The American Cancer Society estimates 1 in 1,000 men will get breast cancer, versus 1 in 8 women. By comparison, 1 in 6 men will get prostate cancer, the most common cancer in men.

“It’s not really been on the radar screen to think about breast cancer in men,” said Dr. David Winchester, a breast cancer surgeon in NorthShore University HealthSystem in suburban Chicago who was not involved in the study. Winchester treats only a few men with breast cancer each year, compared with at least 100 women.

The researchers analyzed 10 years of national data on breast cancer cases, from 1998 to 2007. A total of 13,457 male patients diagnosed during those years were included, versus 1.4 million women. The database contains about 75 percent of all U.S. breast cancer cases.

The men who were studied lived an average of about eight years after being diagnosed, compared with more than 10 years for women. The study doesn’t indicate whether patients died of breast cancer or something else.

Greif prepared a summary of his study for presentation Friday at a meeting of American Society of Breast Surgeons in Phoenix.

Dr. Akkamma Ravi, a breast cancer specialist at Weill Cornell Medical College in New York, said the research bolsters results in smaller studies and may help raise awareness. Because the disease is so rare in men, research is pretty scant, and doctors are left to treat it the same way they manage the disease in women, she said.

Some doctors said one finding in the study suggests men’s breast tumors might be biologically different from women’s: Men with early-stage disease had worse survival rates than women with early-stage cancer. But men’s older age at diagnosis also might explain that result, Greif said.

The causes of breast cancer in men are not well-studied, but some of the same things that increase women’s chances for developing it also affect men, including older age, cancer-linked gene mutations, a family history of the disease, and heavy drinking.

There are no formal guidelines for detecting breast cancer in men. The American Cancer Society says routine, across-the-board screening of men is unlikely to be beneficial because the disease is so rare.

For men at high risk because of a strong family history or genetic mutations, mammograms and breast exams may be helpful, but men should discuss this with their doctors, the group says.

Men’s breast cancer usually shows up as a lump under or near a nipple. Nipple discharge and breasts that are misshapen or don’t match are also possible signs that should be checked out.

Tom More, 67, was showering when he felt a pea-size lump last year near his right nipple. Because a golfing buddy had breast cancer, More didn’t put off seeing his doctor. The doctor told More that he was his first male breast cancer patient.

Robert Kaitz, a computer business owner, thought the small growth under his left nipple was just a harmless cyst, like ones that had been removed from his back. By the time he had it checked out in 2006, almost two years later, the lump had started to hurt.

The diagnosis was a shock.

“I had no idea in the world that men could even get breast cancer,” Kaitz said. He had a mastectomy, and 25 nearby lymph nodes were removed, some with cancer. Chemotherapy and radiation followed.

Tests showed Kaitz, 52, had a BRCA genetic mutation that has been linked to breast and ovarian cancer in women. He may have gotten the mutation from his mother, who is also a breast cancer survivor. It has also been linked to prostate cancer, which Kaitz was treated for in 2009.

A powerboater and motorcycle buff, Kaitz jokes about being a man with a woman’s disease but said he is not embarrassed and doesn’t mind showing his breast surgery scar.

The one thing he couldn’t tolerate was tamoxifen, a hormone treatment commonly used to help prevent breast cancer from returning in women. It can cause menopausal symptoms, so he stopped taking it.

“It killed me. I tell you what — night sweats, hot flashes, mood swings, depression. I’d be sitting in front of the TV watching a drama and the tears wouldn’t stop pouring,” he said.

Doctors sometimes prescribe antidepressants or other medication to control those symptoms.

Now Kaitz gets mammograms every year. Men need to know that “we’re not immune,” he said. “We have the same plumbing.”