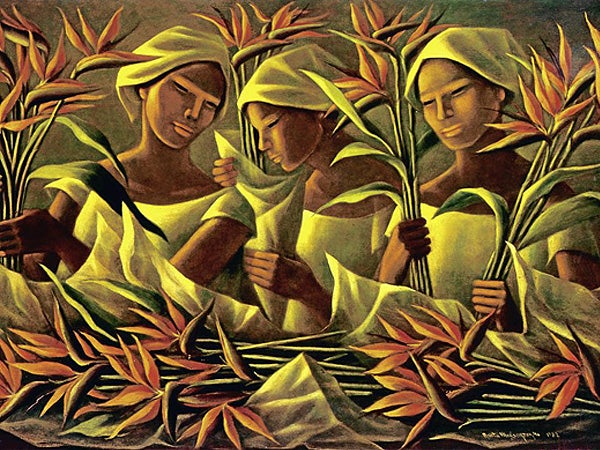 FESTIVE SISTERHOOD. ‘Women with Birds of Paradise,’ by Anita Magsaysay-Ho, oil on canvas, 1982. Though the artist has lived in several countries most of her life, her world is peopled entirely by Filipino women. PRIVATE COLLECTION/PHOTO BY DICK BALDOVINO

In celebration, in praise of artist Anita Magsaysay-Ho; 97

To know Anita is to love her.

Aside from her immense talent, artist Anita Magsaysay-Ho was a gentle, unassuming, generous and kind lady. She was not only a great artist but also a great person. Those who had the privilege of knowing her deeply mourn her passing on Saturday. She was 97.

As editor of the book, “In Praise of Women” by Alfredo Roces, I had to interview Magsaysay-Ho many times over. For most Mondays from February to June 2005, I spent a good part of the day with her in her seaside condominium unit. Still blessed with good health and excellent memory then, she gifted me and my colleague Din Din Araneta with spontaneous and unstructured commentaries on a good number of her paintings.

As our sessions with her progressed, we got to  know  more of  her.  When  asked for comments on people who faked her works and signed her name, she said, “Maybe they need the money.”

When asked what we should tell people who paid top  prices for  what were passed off as authentic  Anitas, she simply said, “Please  tell them they are good art pieces,  but they are not by me.”

Images of the Filipina

Magsaysay-Ho’s art is associated with images of the Filipina at work, at play or in prayer. Her canvasses are inhabited mostly by rural folk who are almost always depicted with small triangular kerchiefs, elongated necks and slits for eyes.

Despite living for decades away from the Philippines, she continued painting Filipinas. When asked why, she had a simple answer: “I cannot paint what I do not know. That is why I never attempted to paint the Japanese, Brazilian, Canadian or Chinese.” That is, even if she and her family lived in many different countries in the ’60s and ’70s.

Magsaysay-Ho’s statement spoke volumes of her integrity as an artist—a trait many in the profession today can reflect on.

It must be this artistic integrity and the irrelative rarity of her works that made one of her pieces set a record high at an auction in Singapore and set the benchmark for prices of Philippine art in the international market. Latter-day art historians will hopefully acknowledge this. In 1999, her oil painting “In the Marketplace,” which shows women vendors and buyers haggling animatedly, was sold for 669,250 Singaporean dollars or an estimated P15 million during a Christie’s auction of Southeast Asian art.

Born in Manila on May 25, 1914, Magsaysay-Ho was known for her use of women as dominant subjects in her works. She studied at the University of the Philippines School of Fine Arts and at the School of Design in Manila where she trained under artists like Fernando Amorsolo and Victorio Edades. She pursued her studies in the United States where she studied at the Cranbrook Academy of Art in Michigan.

She was also affiliated with the Art Students’ League in New York where she took courses in oil painting, graphics and figure sketching.

Her source of inspiration

The Metropolitan Museum of Manila published “Anita Magsaysay-Ho, A Retrospective” in 1988 in connection with an exhibit organized by the museum. She dedicated it to “the women of the Philippines—the source of [her] inspiration.”

Not too well known is Magsaysay-Ho’s role in the development of modern art in the country. Her first show at the Manila Hotel shortly after returning from studies in the United States was the first time Manila was exposed to an exhibit where the artworks defied the classical ideals of harmony and proportions that the Filipinos were used to seeing.

Purita Kalaw Ledesma, a respected chronicler of the development of modern art in the country, states that cubism first made its appearance in the local art scene through Magsaysay-Ho’s awkward angular lines which replaced the traditional curved lines. In an art environment dominated by Amorsolo’s genre  painting, Anita’s charming portraits of women with her use of distortion and dominance of rhythm exhibited a fresh individual style that resisted academic norms.

Her eventual exhibits at the Philippine Art Gallery and her entries to the annual Art Association of the Philippines competitions where she was a consistent winner helped immensely in exposing Filipinos to the modern art movement that was sweeping the West.

In the conflict between the conservatives and the modernists in which escalated in the early ’50s, she straddled both schools. Her angular lines, distended figured and bold strokes classified her as modern but her predilection for genre earned her the label of “female Amorsolo” of the conservative school.

The charm of Magsaysay-Ho and her works were said to have softened the grumpy conservatives and the general public took to her paintings because the scenes depicted were familiar to them. Her popularity contributed in small measure to the acceptance of modern art in the Philippines and to her being named one of the Thirteen Moderns. She is also credited with having influenced a number of young artists, among them Jose Joya and HR Ocampo.

In her studies in the United States—at the Art Students  League  in  New York  and  later  at  the  Cranbrook Academy of  Arts  in Michigan—Magsaysay-Ho  learned  new  techniques  and  new methods  of  creating  artworks that  she  later  brought  to the local  art  scene.   She  thus  expanded  the  horizon of  the modern art in  the  country by  introducing egg  tempera, photograms, woodcuts  and  other  media.

All her  artworks consistently   exhibited   her  love  for  the  Philippines.  It  seems  ironic   that  a  Filipino  artist whose  illustrious   body  of  works  and   contribution  to the  development  of  modern  art  in the  country  has  yet  to receive  the  highest  award  for:    The  National    Artist Award.     By  all  counts  she  is  most deserving—but   for a  piece  of  paper  that  declares  that  she  is  a Canadian   citizen. Having  married  Robert  Ho, a  Chinese  citizen,  she   would  find  her Philippine  citizenship wrestled  away  from  her.

Subsequently,  Magsaysay-Ho,  like  the  rest  of  her family, became a citizen  of  Brazil, and  then of  Canada.

Friends   have urged  her  to revert  to  Philippine  citizenship  or   to  choose  dual  citizenship. But  Magsaysay-Ho  refused  to   be  bothered  with  bureaucratic  processes or  political   correctness.

Anita is survived by her husband Robert and children Helen and Robbie, Linda and Gage, Doris, Jesse, Robert, Steven and Jaymie. Her body lies at the Santuario de San Antonio, Capilla de la Virgen on McKinley Road, Forbes Park, Makati. With a report from Inquirer Research

(Sonia Pinto Ner has careers spanning years in both the academe and art management. She was director of Ayala Museum and executive director of Asia Society, Philippines. Away from corporate life, she has devoted her time to the publication of books on Philippine art and history. Of the more than 50 books she has been involved in, Ner says she enjoyed doing the book on Anita Magsaysay-Ho by Alfredo Roces the most. She forged a friendship with the artist and declares in no uncertain terms: “To know Anita is to love her.”)