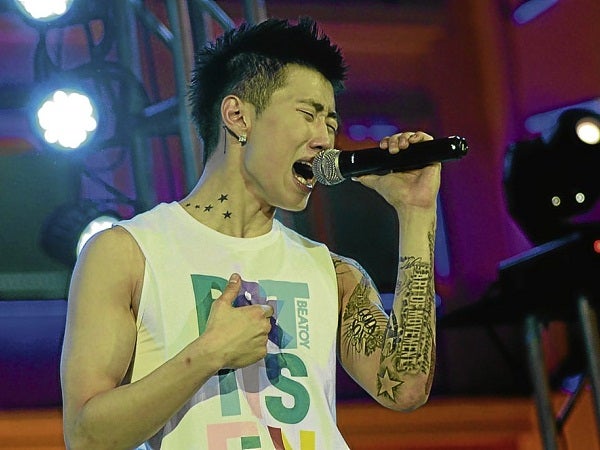 If you don’t know this Korean-American pop artist’s name, we give you three reasons you should: one, he’s an insanely talented multihyphenate—a recording artist-dancer-rapper-producer-actor-songwriter who’s also a member of Seattle-based b-boy or breakdance crew Art Of Movement (AOM).

Two, he’s got the moves (and manners) that can charm the pants off Pinays of all ages. And three, he doesn’t need a translator. If you ask us, that’s more than enough to give him an edge over most K-pop stars.

Barely disguised fangirl observations aside, 25-year-old Park Jaebeom, or Jay Park, proved that he could hold his own against the idol group-dominated K-pop industry, what with the hordes of screaming Pinoy fans flocking to his shows despite the early bouts of rain.

The former 2PM leader had recently been in Manila to promote his new full-length English-Korean album “New Breed,” released locally under MCA Music. He performed a few songs off the album, such as “Know Your Name,” “Girlfriend,” “Up And Down,” and “Star,” last May 4 at the Eastwood Mall Open Park, May 5 at McKinley Hill’s Venice Piazza, and May 6 at Lucky Chinatown Mall.

Having barely recovered from his controversial separation from 2PM, the 25-year-old saw the rise of his solo career in 2010 via his viral YouTube rendition of B.o.B.’s “Nothin’ On You,” and the rest is K-pop history.

The “New Breed” promo tour marks Park’s third visit to our shores—the first in a fanmeet at the SMX Convention Center in 2010 together with AOM, and the second in a special performance at the MTV EXIT concert at the SM Mall Of Asia concert grounds just last year. As he told the audience at the press conference in Eastwood Richmonde Hotel before his first mall show, he loves how Pinoys show him a lot of love and hospitality, and he wouldn’t mind coming back every year if the fans want him to. Insert squeals of delight.

What do you think are the advantages and disadvantages of being solo?

Well, definitely the advantage is having creative control over your music… to sort of make my own career path. And the disadvantage is, I guess it’s a lot of pressure because when I’m onstage, everyone’s looking at me, I gotta sing the whole song while I’m dancing.

Do you feel like you have more creative freedom now that you’re with Sidus HQ?

Definitely! Right now I’m just basically running the operation, making the decisions I want. Before, I would never be able to make a mixtape, work with the people I want, all the other groups that I want. So yeah, definitely, I have a lot more control now.

Where do you get inspiration for your music and writing lyrics?

I’m just starting out, being solo. It’s only been a couple of years. I just started writing songs and stuff like that, so I’ve got a long way ahead of me. I get inspiration from everything—just listening to good songs, seeing a good live performance, having good conversations with people. Just everyday life.

Of all the songs included in the album, which track can you dedicate to all your Filipino fans?

From working with top artists, you’re also working with different idol groups, like recently with U-KISS for their song. Are there any other groups that you’d like to work with?

Yeah, I just like to work with anyone who does R&B and hip-hop music, but I really like Big Bang and 2ne1 so I hope we do collaborate.

Do you have any plans of making “New Breed” as an English version?

I might put, like, a couple of English songs, maybe “Know Your Name.” There’s an English version of “I Love You,” but I also have an English mixtape coming out. It’s just gonna be free to download; it comes out in a couple of weeks, so yeah, let me just put a link.

If you had to choose, which would you prefer: singing, dancing, composing, or modeling?

What sets you apart from other artists, Korean or American?

If you look at the album, it’s not just hip-hop or R&B. There’s dance music, sad music, sexy music. There’s straight-up hip-hop and straight-up rap. So I think being versatile would be my strength.

Your title track is called “Know Your Name.” So how would you like your Filipino fans to know Jay Park?

If you have the passion for it—music, dancing, singing—you just keep at it. You gotta be consistent, you gotta work hard. You gotta enjoy what you do, and I’m sure you’ll succeed.