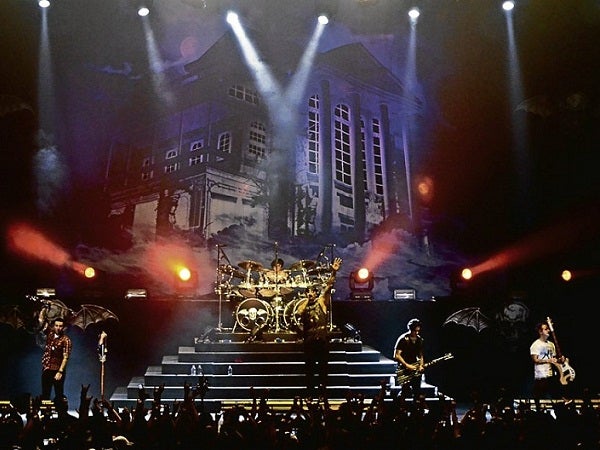 Let’s start with the massive stage, rotating backdrop and multiple ledges. If those are not enough to make your heart start thumping, then let’s add an array of lights and massive speakers. Are you ready?

I never thought that it would be possible to actually see A7X perform here in the Philippines. I’ve only seen their concerts on YouTube, and even with the onslaught of foreign acts coming to Manila, I never imagined that A7X would be one of them. They’re not mainstream and not all people are familiar with them, much less their songs.

However, seeing the crowd inside Smart Araneta Coliseum, I saw that they have plenty of loyal supporters who knew every song in their repertoire. Each person inside the Big Dome that night was a fan. And by the end of the show, each one had one of his/her dreams come true.

Gates opened at 6:30 p.m., and fans could be seen milling around the standing Patron section in anticipation of the rocking performance that A7X always gives. By 8 p.m., opening act Slapshock welcomed and hyped up the crowd with their songs and robust performance.

Jamir Garcia performed with so much passion that it amplified the energy that was already building up inside the Coliseum.

Lights dimmed, fans screamed and the haunting musical box intro of “Nightmare” played out like a lullaby out of the speakers. Synyster Gates took his usual opening position at the center ledge, and on his cue, the show started. People were then transported into a world where rock gods play among men and rock music was the universal language. It was surreal.

“Nightmare” was followed by one of my personal favorites, “Critical Acclaim.” It’s a powerful song, and it raised the energy of the crowd even higher. By the time the third song, “Welcome to the Family,” was done, I felt like I’d been on a 5-km run.

Avenged Sevenfold never fails to give the best performance in every city they are in, and Manila was not an exception. They won the 2012 Revolver Golden Gods Award for Best Live Band and, judging from what they showed Manila that night, they deserved it.

Each member of the band displayed the very definition of showmanship, constantly giving their all in what they do. M. Shadows sang flawlessly while enthusiastically moving around the stage. Zacky Vengeance got a brassiere thrown at his feet by an ardent fan; with his good looks and talent, what can you expect? Johnny Christ was a sight to see with his purple dyed hair, slapping his bass with precision. Arin Ilejay was equally talented, giving life to the drum tracks that the late drummer, The Rev, had created.

And, of course, Synyster Gates was unrivaled in his blistering solos. There wasn’t one moment where he missed a single note, with all that shredding and moving around. It was unbelievable. When I finally saw live the popular V-formation guitar duels that only he and Zacky V can do, I was in awe.

I was a little biased; my attention was focused almost entirely on him. He’s one of my favorite guitar players, and it’s hard to pull my eyes away from his jaw-dropping guitar solos. He exudes so much confidence when he plays; you’re never going to doubt his talent. Plus, he’s really good looking.

There was one moment when he slid off his guitar offstage because of a technical malfunction, causing him to miss the second part of the solo, but he smiled it off good-naturedly afterwards.

A typical Avenged Sevenfold concert involves letting a few fans onstage to perform with them. Two fans were awarded the same opportunity here in Manila. The girl sang with M. Shadows during “Buried Alive,” while the guy played the bass during “So Far Away.”

For a musician, allowing another person to use your instrument is already a big deal. It’s like letting somebody else borrow your comb or your toothbrush. But Johnny Christ was so cool about it, sitting on the drum ledge, sipping wine and nodding in approval while the young man displayed his skills on Johnny’s bass. It was a moment every fan would die to have. I’m sure both of them would never forget April 26, 2012.

For their Buried Alive and Welcome to the Family tour, a tribute to The Rev was always expected. The backdrop changed into the now-popular picture of The Rev in a tight embrace with his fellow bandmates. That picture was taken back when they were touring for the City of Evil album, and seeing the image onstage will make you realize how much they love their brother. “Afterlife,” “So Far Away,” “A Little Piece of Heaven,” and “Fiction” were sung in memory of The Rev. M. Shadows left out the vocal parts of The Rev and let his presence be felt inside the Coliseum with his prerecorded singing.

As their set drew to a close, M. Shadows asked the audience if anyone among them had ever been to the United States. I was surprised with the number of hands that shot up as M. Shadows laughingly replied, “Really, all of you? Has anyone ever been to Las Vegas?” I knew then that they were about to sing the Las Vegas-inspired “Bat Country” for their finale.

In all the concerts I’ve been to, this must have been the first time I’ve had that overwhelming feeling of not wanting the show to end. Unfortunately, they couldn’t keep playing or else they’d all faint in exhaustion with the energy they showed throughout the night.

Fans shouted for more and they obliged with “Fiction” and “Unholy Confession.” As they waved goodbye, the band thanked the Filipino crowd and expressed their joy in coming here and hoped that they could come back again soon. (Oh God, I really hope they do!). They sincerely enjoyed the show and were impressed with the Filipino crowd. It takes a lot to impress this band, believe me.

As the night ended, so did the moment where the earth stood still for 45 minutes and allowed me to live out one of my fantasies. They didn’t need fire onstage to create a fiery performance. With their intensity and sheer talent, Avenged Sevenfold was able to give Manila a truly unforgettable, blazing performance.

“Avenged Sevenfold live in Manila” was presented by DAYLY Entertainment and Dickies Philippines.