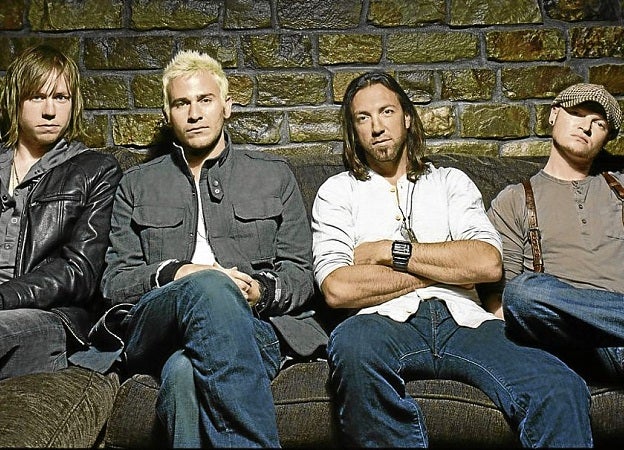 Catching up with Lifehouse

There’s a reason foreign acts keep coming back to the Philippines. For Lifehouse frontman Jason Wade, it involves a dare—and a certain duck delicacy. “The last time we were there with our guitar tech, we bet him $50 that he wouldn’t be able to eat three balut. We’re hoping this time that we can get him to eat five,” he chuckled.

Of course, that’s not the only memorable moment he wants to make for the band’s next trip to Manila. The American alt-rock band graced our shores last 2009 to promote its fourth album, “Who We Are”; now armed with a fifth album, 2010’s “Smoke & Mirrors,” and a bunch of happy memories from their first trip, Wade and the rest of Lifehouse—guitarist Ben Carey, bassist Bryce Soderberg and drummer Rick Woolstenhulme Jr.—are set to make Pinoy hopeless romantics fall even more in love with their heartfelt, guitar-driven brand of rock in a special comeback gig.

They will be performing their hits and more on May 26 at the Smart Araneta Coliseum. They actually have a whole bunch of anthems to choose from, including “You And Me,” “Take Me Away,” “Everything,” “Sick Cycle Carousel,” “First Time,” and the US Top 40’s Most Played Song of 2001, “Hanging By A Moment.”

Super recently caught up with Wade while the band was recording their sixth studio album in Los Angeles, California. Apparently, the boys had been running a tight tour schedule ever since the release of “Smoke & Mirrors,” not to mention coheadlining with Daughtry on a US tour, which explains why they haven’t finished the album yet.

Meanwhile, we found out a few interesting bits of trivia: one, Wade and Daughtry have been working with a certain fauxhawked favorite from this season’s “American Idol.” And two, we get a surprising—and unbelievably flattering—revelation about Manila from Wade himself, and we have a strong feeling it’s not just lip service. Read the phoner excerpt below to find out.

So, Colton Dixon of AI sang “Everything” on the show…

Yeah, that’s right! I actually had him in my house the other day. He’s making songs for his upcoming album. He’s a really, really nice guy. Very talented.

I heard that as soon as you heard him perform the song, you called him up and asked if you could write songs with him.

Yeah, I did. I was at home watching the show, and I heard that he and Chris Daughtry had reached out and they had dinner a couple of weeks ago. I called Chris up to get Colton’s number, and I called him and just wanted to congratulate him. I thought he did a really, really excellent job.

You worked with Chris in “Smoke & Mirrors.” Will we see a collaboration with Colton in your next album?

It’s very possible. We wrote two songs yesterday so we’ll see how we turn out, but I really enjoyed writing with him.

Colton is pushing for Christian rock music, whereas you guys don’t want to brand yourselves as Christian rock. What are your thoughts on it?

We’ve always kind of liked to stay away from being in any genre as a pop rock band or any other. I feel like genres kind of confine you to a certain audience, and it was always our goal to reach as many people as possible with our music. It was always kind of tough to be labeled or put in a box.

We’ve always just encouraged everybody who listens to our music to just take what they can get out of it. Obviously, a lot of the songs are very spiritual and are taken in that context, which I think is great. But with a lot of the songs, especially “Everything,” a lot of people know the words and also sing it as a love song, so we don’t really discriminate. We take into account the journey of the song so they can take it wherever they want it to.

(Laughs) I’ve actually talked to the guys and we kind of reminisce about playing that show. That show that we played at Araneta Coliseum was by far our favorite show since the inception of Lifehouse.

We’re really, really excited to go back. It was just interesting to see the responses from the crowd. It really was just a powerful feeling. You can feel the energy and the electricity in the arena, and we were blown away by the fact that with a lot of the songs that weren’t well-received in America, there’s a familiarity with some of these songs over in the Philippines, so we’re really, really just shocked in a good way.

Since you’ve been making music for over a decade now, have you had any changes in what inspires or motivates you to write music?

Yeah, I feel like it’s always a blessing. I feel like we’re at a point in our career now where it’s really vital that we keep looking for new inspirations instead of becoming stagnant and complacent and redoing the same album more than once. So we’re really hungry to dig deep and find new sonic landscapes to go to. Personally, I’ve been inspired by film music, so I think that on this new album there are two or three tracks that kind of bring an orchestral feel to an actual pop-rock song structure, which is a really, really nice hybrid. I think we’re really just kind of going in this new direction and it sounds really fresh and new for us, so we really like the progress of that.

Most of your previous songs have been used for TV soundtracks like “Smallville” and “Grey’s Anatomy.” Given the context of those shows, does it resonate with you guys?

It does. I think it’s fantastic. For me, as a songwriter, when you write a song and the director or producer was inspired by it to put it in a certain scene, that inspires me to want to write even more songs. When I hear the music played with really talented actors kind of portraying their scene or whatnot, it’s a whole other level and medium of communication and connection with people, and I really support it. I’d love to do more music for TV.

I actually call it a mood setter.

(Laughs) Actually, that’s right on. That’s exactly what it is.

(Laughs) I get to be kind of a hopeless romantic right there. I really enjoy it when the right scene kind of collides with the right melody and right lyrics.

Lastly, what can we expect from your second concert?

We’re gonna stretch the set. We usually play for about 75 minutes, but we’re gonna try to stretch it for over 90 minutes so we can play many songs as possible. If the fans want to go on our Twitter page and make song requests, we’ll try to include them. We’re gonna try to tailor the set to the fans in the Philippines because we feel like this is a special show.

“Lifehouse Live in Manila 2012” is presented by DAYLY Entertainment and co-presented by Star World and FOX. Tickets are available at all TicketNet outlets. For the latest updates, follow DAYLY Entertainment (@dayly_ent) and Lifehouse (@lifehousemusic) on Twitter with the hashtag #LifehouseMNL2012.  You can also check out Lifehouse Live in Manila 2012 on Facebook.