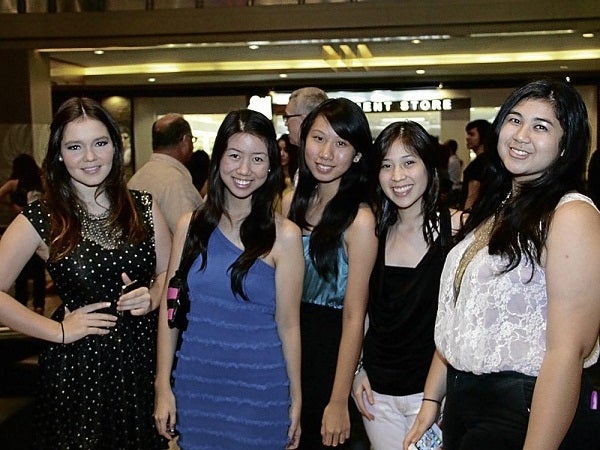 WHILE OSCAR Wilde may have thought that youth was wasted on the young, The Northwing at SM City Cebu begged to differ as it celebrated the second year of Glitterati, an annual fashion show featuring young Cebu personalities.

Glitterati 2012 was dubbed “Lifestyle on the Edge,” and true enough, it was an edgier show in more ways than one, with looks from various SM City Cebu brands showcased on a two-story industrial stage with some of the models perching quite literally on the edge.

As the event took place on March 23, with school conveniently out and summer just in, the girls’ friends were all there, some of whom walked the runway at the first Glitterati. Naturally, the parents were there too, even such low-key faces as Jason and Anna Hyatt who were there for daughter Reona.

Jason confessed that evening that it was the very first event he’d ever been to, save for the ones held in his restaurants (the internationally acclaimed Abaca Group of Restaurants, which we hear is opening a fourth one soon).

While the adults were catching up while sipping on The Coffee Bean & Tea Leaf espresso martinis, we checked on the girls backstage. They were all a bundle of nerves, but once the show started rolling, each of them maneuvered the runway effortlessly and looked every bit the pro.

Afterwards, we heard Claudine Ugarte ask daughter Adi, “Hey, where’d you learn to walk like that?” It came as no surprise to many, though. After all, these girls belong to the generation of Facebook, DSLRs and Instagram, platforms that, whether they realize it or not, have all made them ready for their close-up.

Once the show was done, talk turned to the clothes on the runway. Dondi and Corinne Joseph wanted to buy the entire outfit that daughter Justine was wearing, and Ms Mendezona asked where she could get a hold of the cape jacket Nikki Tilka was modeling, while Rose Hennessy and Nia Aldeguer wanted something else entirely—a copy of the soundtrack.

There were raves about the fashion and the music, but talk always ended up back to the girls. Twentysomething sisters and entrepreneurs Sam and Mai Briones were overheard saying, “How do these girls already look this good at this age? Isn’t this supposed to be an awkward stage?” So no, Mr. Wilde, as it turns out, youth is not wasted on the young.

“Glitterati: Lifestyle on the Edge” was co-presented by BMW. Also brought to you by The Coffee Bean & Tea Leaf, David’s Salon, Just Jewels  and Classic Savory Restaurant.