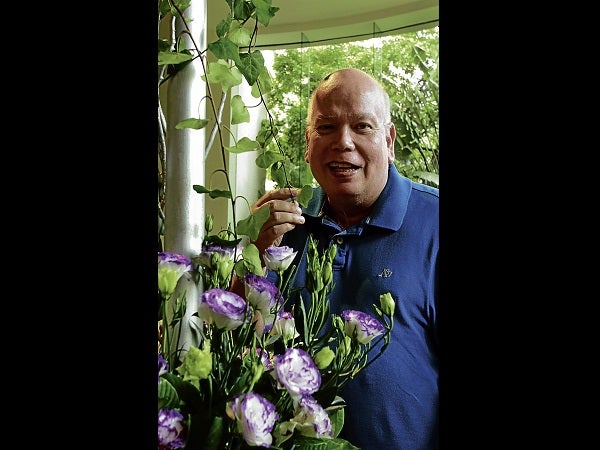 Tony Rodriguez: ‘Flowers have lit up my life’

“JOY CAN spring like a flower even from the cliffs of despair.”

That is the adage floral designer Tony Rodriguez, 61, lives by as his schedule is frequently filled with visits to the doctor. Asked about any ailments, he said, “I don’t have one. Health is a state of mind. Flowers have lit up my life.”

Rodriguez recently installed major floral architectural installations at the Edsa Shangri-La, revolving around floral umbrellas to denote shade from the sun and rain. The designs were different from his usual style, and the colors reflected the sun—orange and yellow with a complementary color of violet. In keeping with the season, he favored tropical mokara orchids, known for their vivid shades and starfish shapes.

Guests at the Lobby Lounge marveled at these parasols of orchids in graduating shades of yellow to orange, atop silver poles that were entwined with ivy creepers. The base was festooned with button mums and layered with bouquets of purple, peach and orange lisanthiuses that were juxtaposed with prominent Asiatic liliums in pale yellow.

The height of the arrangement was an allusion to lofty ideals. “It’s a step to heaven,” said the designer. “I’m glad that I continue to be creative. This floral architecture symbolizes a new perspective.”

A smaller version was a panoply of mokara orchids bursting in summery colors. At the base of the architecture lay clusters of purple hydrangeas playing against the very showy agapanthuses.

In another public area, a single trellis of purple mokara orchids over bouquets of mums and pale pink lisianthuses made a grand statement.

“I wanted to make it sweet. I learned from my friend, designer Auggie Cordero, to always infuse some pink for a soft touch.” said Rodriguez.

The floral architecture was Rodriguez’s Mother’s Day rendering and tribute to his late mother, Lourdes “Bocay” Monfort, who taught him how to create stunning arrangements. With this skill, Rodriguez has worked for prestigious clients, including deluxe hotels such as the Edsa Shangri-La.

When he dressed up the Edsa Shangri-La’s events window, many people had their pictures taken in front of it. They adored the wedding table with a metallic embroidered overlay and a centerpiece of ostrich plumes, silk peonies and ranunculuses. Topiaries of silk hydrangeas and roses dangled from the ceiling, as did swags of glass beads.

Seeing their smiles and awed expressions, Rodriguez said, was fulfilling. “Making people happy is a wonderful gift from God.”

During the managers’ meetings of the Shangri-La hotels group, Rodriguez dressed up the afternoon tea with a Spanish theme. Topiaries of red roses, evocative of sangria, were set on tables. Fringed mantones hung from the chandeliers.

Despite being bound to a wheelchair, Rodriguez still gets lots of clients. It’s his creativity that is pumping his energy. Rodriguez recalled that when he had a stroke, the doctor noticed that his patient spoke only of flowers in his sleep.

“It’s will power. My faith in God strengthens me,” affirms Rodriguez. “He is with me and I believe there are many people whom I still have to satisfy. When I look back, I thank Him for all the graces. Each day, good or bad, is a wonderful gift.”