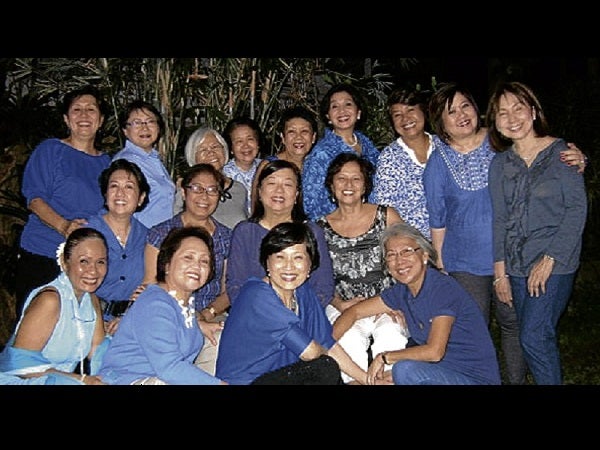 There’s something liberating about turning sapphire

EVEN ACTIVIST nun Sr. Mary John Mananzan, OSB, like all the rest of us Scholastican jubilarians, loved the homecoming theme for 2012 that the silver jubilarians, led by woman pilot Brooke Castillo, adopted: Walang Kupas! A logical running theme in the light of numerous recent natural disasters was the love and care for the environment.

And so, our College ’67 class (gasp! Sapphire girls—45 years after college) spent the year in preparation to convince ourselves that yes, we too were beyond fading. Despite lined foreheads, greying temples, thinning locks, and generous hips, nothing much about us has changed, we have convinced ourselves to believe.

To our minds, preparing for our five minutes of shared stage limelight was a legitimate enough excuse to meet regularly. Not that we needed any reason at all to make merry, but everyone is familiar with the difficulty of finding a consensus regarding day and time.  And exactly what seniors continue to be preoccupied with is another story altogether.

We did not care for a major production number nor the usual song and dance routine, not even to reprise the songs of our youth—even with our continuing romance with the Beatles, the Cascades, the Lettermen. A message was what we wanted to deliver. We had done many “original” stuff in the past, borrowing and taking liberties with a song from the APO Hiking Society, even turning to a Spanish song whose lyrics we tampered with to honor our Spanish classes taught by the dashing Rogelio La’O, where we learned more Spanish songs and “Mi Ultimo Adios” than grammar. Thus, our continuing illiteracy with the language.

Patiently herded by class leaders Linda Nañawa and Elsa Mapua, we decided to carry symbolic LED “candles” especially supplied by Ana Sy-Quia from Costco and designed by Monette Gomez as we made our appearance to set the tone for our video presentation of Louis Armstrong’s “What a Wonderful World.”

This provided the painful contrast to today’s world, whose blighted status we have all contributed to, whether consciously or not. We ended on a high note with much hope and optimism with Michael Jackson’s “Heal the World.”

Take note of the special effects that went into our production. A trumpeter from the Manila Symphony Orchestra was hired to herald the class number.  The assignment that guaranteed a surefire class participation was the call for photos of grandchildren for the video—and how they poured in, showing what was uppermost in the minds of sapphires.

A full year before, Linda was gifting each class member with a sapphire bangle from Michael’s in the US. Virginia-based Yvette Jarencio also sent thoughtful sapphire neckpieces she herself made.

Betty Roxas Chua, as in many class milestones gone by, opened her Makati home and hosted our meetings, consented to design and execute the class attire, with the family-owned clothing factory Elite Garments and her two designer daughters of Freeway, Sheree Gotauco and Katty Qua, behind her—the duo behind the National Artist collection series. Not always the most pleasant of tasks to design for the imperfect silhouettes of hard to please seniors.

After a few major and minor alterations, we were all similarly dressed in sapphire tops which we were all encouraged to accessorize. Estela Silva did it with eye-catching butterflies, Nori Deus with feathers, Lourdes Victoria with white beads. All seemed pleased with the result, so that when Marisa Chikiamco’s mother Dr. Paquita Chikiamco passed away and lay in state on homecoming day, Marisa chose to wear her top at the wake.  Something that her true blue Scholastican mother would have approved of, anyway.

Was our theme on the environment too grim and too serious for a homecoming program? Be that as it may, it needed to be said. Even as we received reviews that ranged from “trust your class” to “come up with something unique” (from well-loved music teacher Ditas Rivera da Silva and her Theresian buddy, Yoly Bacani), to those that felt that entertainment need not always have a utilitarian function.

But really, the stage number, now turning anticlimactic, was merely symbolic of the camaraderie that happened before and after.

A jubilarian tradition Scholasticans always look forward to is receiving the blessed St. Benedict medal with ribbons bearing our jubilee color that the school gives everyone in attendance.  Our childlike faith in St. Benedict, twin of St. Scholastica, lives on as we pray that he keeps us safe. It gained special prominence this year because it was also the giveaway of the celebrated Shalani/Roman wedding.

Multiplication of loaves and fish

Our class is averse to fundraising and solicitations (and lousy at it, too), so a long-established practice at gatherings would be to pass an envelope for anonymous donations toward building up a class fund. Much like the multiplication of loaves and fishes, after final accounting was over and done with, there was still a sizable amount that was donated to Benedictine classmate Sr. Therese (Ela) Bulatao, OSB, now assigned to St. Peter’s College in Ormoc.

We joke that because we did not get to dance on stage that night, we had to let our hair down at the homecoming dinner on campus by dancing in the rain when the band played nostalgic music of our times. There was no need for DIs then, nor at our post-homecoming out of town trip at the Kamaya Beach Resort in Bataan—mercifully, but bad for the business, the sapphires made up the bulk of hotel guests and we danced yet again, this time in our bathing suits. Yes, something liberating about turning sapphire.

The places and the events may easily blur in time, but not the enduring bonds of friendship that began 45 years ago on the Leon Guinto campus.  It matters little what different paths our lives have taken—we will always be that girl from Lipa or San Fernando, that seatmate in theology class who froze in terror as college dean Sr. Caridad Barrion checked on how many Masses we attended the past week.

Or even the classmate, perhaps spared from heartbreak (but what is college life without such angsts?) who insists on remembering me in tears by my locker over another tempest in my soul. Oh, the folly of youth!

And it were as if our conversations in the canteen or the Social Hall, disrupted by the electric bell summoning us to class, were merely continuing.

But 45 years later, we all remember—and love and laugh together secure and assured that while all else is transitory, friendships from youth endure and are for forever. Who cares if you were a former congresswoman or a known philanthropist or a coffee heiress or a familiar byline?  All sapphires are created equal.

With the College ’67 sapphire milestone behind us, many of us who are also HS ’63 Scholasticans now look forward to Cincuenta and turning golden in 2013!  One never quite wearies of homecomings—and the right time and place to come home.