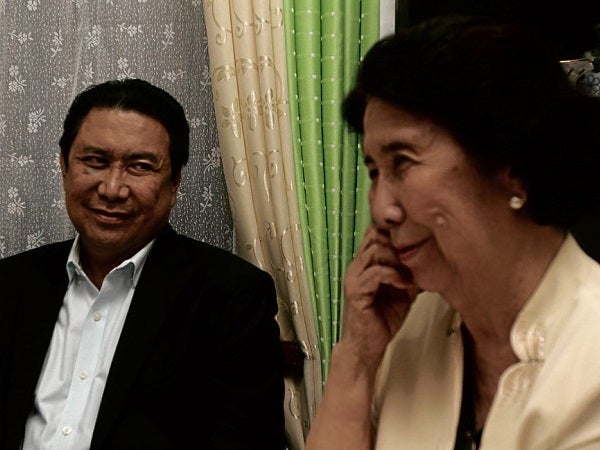 Caridad Tulfo–how she brought up the (in)famous brothers

Behind every man’s success is a mother with a badass whip.

They may be in-your-face, tough-talking journalists, feared, loved and hated by many, but this pack of warrior-brothers heel only to one voice—their mother’s.

Yes, the Tulfo brothers have a mother. And she’s not quite what you expect the mom of high-profile media persons Ramon “Mon” Jr., Erwin, Raffy and Ben might be.

Soft-spoken, courteous and polite, Caridad Tulfo, 87, is very old-school. As the disciplinarian of the Tulfo household, she believes that sparing the rod will spoil the child. When you’re raising boys born two years apart each other, you’ll either lose it from sheer exhaustion or toughen up and treat them like men.

“Every week, I would call my children for a two-hour lecture on honesty, obedience. I needed to instill in them the values of life,” Caridad said in Tagalog. Disobedience was not tolerated in their house. She could not afford to, not with 10 children.

Mon, she recalled, was always trying to outwit her. When Mon needed to be punished for being a bad boy—and he often was a naughty boy, Caridad said—he would put a piece of cardboard inside his pants to protect his legs from his mother’s wrath.

“Did my mom tell you how many times I had to be spanked for discipline in a day [when I was a little boy]? Three times,” Mon said, laughing. Sometimes, he continued, she would even have the help spank him instead of her.

“But I would always know because it sounded different. He’s immune to pain,” Caridad said, laughing along.

Misbehaving children were first punished by Caridad, who is a full-time mother. If their dad, Col. Ramon Sr., was around, he would be informed of the misdeeds and the kids would get another punishment from him. Ramon Sr., as a military man, was often away from home, though, leaving the reins in the able hands of Caridad.

“Double yung punishment if Dad were around. But I never resented those. I never do that to my kids, but that’s the old-style discipline. If not for my mom’s discipline, I would be in Muntinlupa now, in the national penitentiary,” Mon said.

Raffy, 52, the eighth of the Tulfo children, recalls his mother’s daily prayer: “I still remember my mother’s prayer. She’d say, ‘Lord, Raffy or Erwin will grow up criminals, please take them away from me now. I offer their lives to You.’”

“Raffy then couldn’t sleep because he thought he might die if he fell asleep,” said Mon, laughing. But if their mom was a strict disciplinarian when they were little, their grandmother, Caridad’s mom, was even more rigid. “May palo na, kakagatin ka pa,” Mon recalled.

Caridad has been through a lot. She was a prisoner of war during World War II (she’s half-Japanese), and she single-handedly raised 10 children—seven of them boys. This 5’5” lady has certainly borne many trials and heartaches in life.

What got her through tough times, she said, was prayers. In fact, it has all been about prayers. Raffy has a pocketful of prayers—literally. Stampitas for all sorts of protection are tucked neatly in the sleeves of his wallet. His car and home, he said, are also lined with saints gifted by his mom.

“I believe we are where we are in our careers mainly because of her prayers. Her prayers are not for herself but for us. She’d request nuns and priests to pray for us. As if the prayer room is not enough, she still goes to church a number of times each week,” Raffy said.

Caridad’s father was a Japanese businessman. They owned a store, she said, and were quite well-off compared to her classmates. In grade school, she used to pilfer school supplies like pencils and pad papers, even slippers, from the store and give those to her less fortunate classmates. If the household help saw her taking out stuff, she would bribe them with P5 so they wouldn’t tell on her parents. It always worked, she said, laughing.

Raffy, who Caridad said took after her in terms of generosity, calls his mom the Robin Hood of her time. Except that this Robin Hood didn’t take from everyone; she took stuff that belonged to her family.

Caridad’s father was also very generous, she said, donating often to charities and helping their employees whenever they were in tight financial situations. The opposite could be said of her mom, she said. Her parents differed so much in this part of their lives that when her dad passed away, Caridad heard their tenants say they wished it was her mom who had passed on.

“God always answers my prayers. Even during the war, I prayed no one would discover I was part-Japanese. I would put mud on my face and body and pray nobody that would find out because men were killing and raping women. It was war. Then He gave me 10 children. I thought I couldn’t handle it, but with His help I did,” she said.

Growing up with nuns and priests from her mother’s side of the family, Caridad used to go to church every day until recently, with old age now limiting her movements. Today, she spends most of her time in her prayer room, where a collection of over a hundred Mother Mary images from all over the world decorates the walls.

She goes to the prayer room when she feels lonely—she lives on her own with one help; when she wants to be alone with her thoughts; when she misses her children; when she’s sad and crying; when she wakes up from a bad dream about her children, usually involving her sons.

The prayer room is where she runs to when she has problems. And right now she has a lot on her plate.

On May 6, Mon Tulfo figured in a brawl at the Ninoy Aquino International Airport with movie stars Raymart Santiago and Claudine Barretto. The next day, on “T3,” the TV show hosted by Ben, Raffy and Erwin, the brothers made threats on national television against the couple (they have since issued an apology and are currently under suspension).

Like most Filipinos, Caridad and the three brothers learned about the brawl in the news. It was not like Mon to tell anyone he had a problem. Mon said it never even crossed his mind to tell anyone.

“I nearly passed out. That was the worst I’ve ever been. The worst was the bruised ego. Everything I learned in martial arts came to nothing in that incident,” said Mon.

Caridad said she never wanted her sons to be journalists because she knew the profession involved risks. They would have enemies, she said. Instead, she wanted them to become priests—all, save for Mon, she said, because she knew he would not finish the course if she forced him to.

“I have a prayer for journalists. I say it every day. I was happy when Erwin issued an apology. If the Santiagos won’t accept them, then that’s still the will of God. Maybe He wants to test my children,” Caridad said.

Raffy said that when her mom says something, like you’ll get bad karma for this or you’ll be generously rewarded for that, it usually comes true. That’s why when she reminds him he hasn’t been calling or visiting her lately, that it’s important not to take their mom for granted if they want blessings to come into their lives, he’d come rushing back to her side.

“Nagtatampo lang ako. I don’t talk to them, so they come rushing here right away and give me gifts, like cakes, which I can’t eat anyway because my sugar is high,” she said, laughing.

“She’s the greatest mom on earth as far as I’m concerned,” said Raffy. “She’s very thoughtful and lovable. She calls us whenever she thinks medyo napapariwara kami sa mga sinasabi namin sa radyo or TV. She gives us advice, and more often than not I listen.”