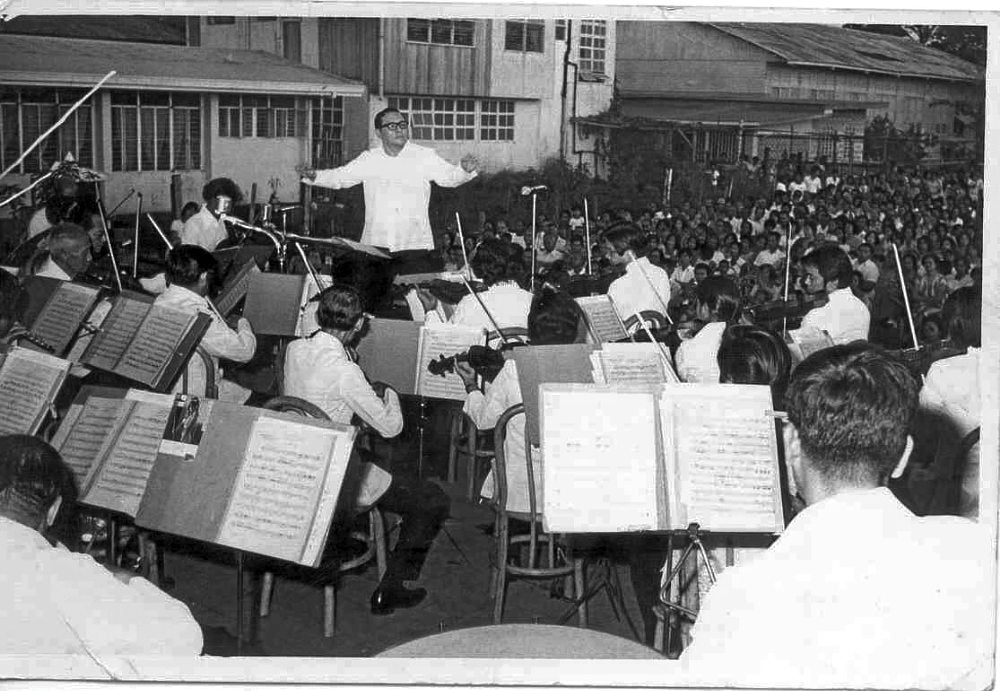 JOSÉ conducts an orchestra in an outreach performance.

The legacy of Regalado José

A piano concert recently paid tribute to the late pianist Regalado José. The musician’s former students  at the University of the Philippines performed.

José taught piano  for over  six decades at the UP College of Music, where he chaired  the Piano Department. UP later  declared him Professor Emeritus.

The UP Mini Hall was filled to the rafters by music-lovers and former students. His family was there, led by his wife, the former Remy Trota, and children Ricardo (Rico) and wife Lydia Yu; José Renato (Ronnie) and wife Stella Legaspi; Ma. Regina (Rina) and husband Jesse Clamor Raymunda; Anna (Rae-anne) and husband Victor Valenzuela; and Rita  (Ria) and husband Vincent Wong.

The late maestro was best remembered for his dedication to teaching and his paternalism toward his students. Outside his life as a musician, he was a dedicated husband and an exemplary father. He had a positive attitude toward life and lived it to the full.

Brief remarks given by the maestro’s students praised him for his fatherly solicitude and encouragement. They included Nita Abrogar-Quinto, former chair of the UP Piano Department; Adolovni Acosta, who flew in from Thailand where she teaches at Mahasarakham University College of Music; and Karen Francisco.

The response on behalf of his family was given by his namesake, Regalado Trota José Jr., known more popularly in culture circles as Ricky José.

Former students who performed were retired Mauricia Borromeo, former dean of the college, and Imelda Ongsiako, former chair of the Piano Department; Pia Balasico and Gemma Malicdem, UP faculty members.

The program was hosted  by Mita Fernandez, a faculty of the Piano Department.

The program featured piano pieces for solo and duo culled from the works of Rachmaninoff, Debussy, Granados, Chopin, Brahms, Liszt and Poulenc.

Listening to his former students triggered in me fond memories of the maestro. I had initially cultivated a very professional relationship with the late master that soon blossomed into a lasting friendship.

He was also the favorite tandem of the late baritone Aurelio Estanislao. José also collaborated with José Mossessgeld Santiago-Font, Remedios Bosch-Jimenez and many more performing artists, singers and instrumentalists alike.

Regalado was known for his excellent rapport with singers. When a singer skipped some bars, he kept his cool and played naturally, following and in support of the singer, as if nothing happened.

And when the singer went half a tone below a given key, he would graciously also modulate to the same key, while reading the score in the original key. This he did quite professionally without showing any hint so as not to cause an embarrassment to the other artist.

Knowing his quality, I approached him to collaborate with tenor Gary del Rosario, now an accomplished tenor based in Cleveland, Ohio, who was then submitting a tape for audition abroad. When I asked him about the fee, he graciously said, “Gratis.”

For many times Gary sought Maestro Regalado as his collaborative recitals in Manila both on stage and in soireés in private homes. Rehearsals were always held in the Maestro’s cozy residence, after which snacks prepared by his wife were served.

Gary admired the symphonic playing of Maestro, which means the pianist made the piano sound like a symphony especially in the arias, truly a hallmark of his playing.

When my daughter Hiyas needed a pianist to play second piano at the finals of a Namcya competition, Maestro readily lent his assistance. When he appeared at the CCP Little Theater in barong Tagalog, everyone thought he was one of the jurors. People were surprised when he sat at the second piano for the concerto-portion rendition of Hiyas’ program: Mendelssohn’s Piano Concerto in G Minor.

When I handed him an envelope after the performance, he smiled at me and said, “Keep that money for your daughter’s needs,” and went straight home, without waiting for the announcement of the winner.

When Hiyas gave the required recital for her graduation from the Philippine High School for the Arts, we thought of the maestro again to collaborate on the second piano for Beethoven’s “Emperor Concerto.”  He graciously granted our request, and, as always, he did it for love.

After the first rehearsal, over a snack in his residence, he told Hiyas: “You played a wrong note; find and play it correctly next time.”

At home, Hiyas painstakingly looked for the wrong note, playing the piece slowly until she identified it.

Back at the rehearsal, the maestro commended Hiyas for finding it, and told her always to be careful in reading the notes. After the rehearsal, he said with authoritative dispatch to my daughter: “You don’t need another rehearsal; you are ready.”

When Hiyas needed a teacher at the UP College of Music where she enrolled for a Bachelor’s in Piano Performance, as her teacher went on leave after the first term of her freshman year in 1998, I personally went to his residence and kindly asked him to be my daughter’s teacher. At the time, he was already retired, and was just going to the college to teach Piano Literature. He said, “For your daughter’s sake, your request is granted.”

Then he told me to tell Hiyas her lesson would be on a Wednesday, at 7 a.m.

When he was still teaching, early birds at the college would find him playing the scales on the piano before 7 a.m. His sonorous sound reverberated through the entire building. He would only stop when a student arrived to take lesson at the appointed time: 7 a.m.

At home, I would be hearing my daughter warming up with the scales before she would actually start playing a piece. When she got a scholarship on her second year to continue her Bachelor’s in Piano Performance until she earned her doctorate in Musical Arts in Piano Performance in the United States, she realized the importance of playing the scales in honing technical prowess.

For several years, on Sundays, maestro would be seen on the afternoon program, “Concert at the Park,” over  PTV-4, where he was the esteemed conductor of the park’s symphony orchestra, the Metro Manila Symphony Orchestra. The program was a top favorite among TV viewers. It brought classical music to many homes, touching many hearts of music-lovers.

But more than a passion, maestro Regalado José also took  music as a mission, and passed it on as a legacy to his students who continue to make it a part of a living tradition today.