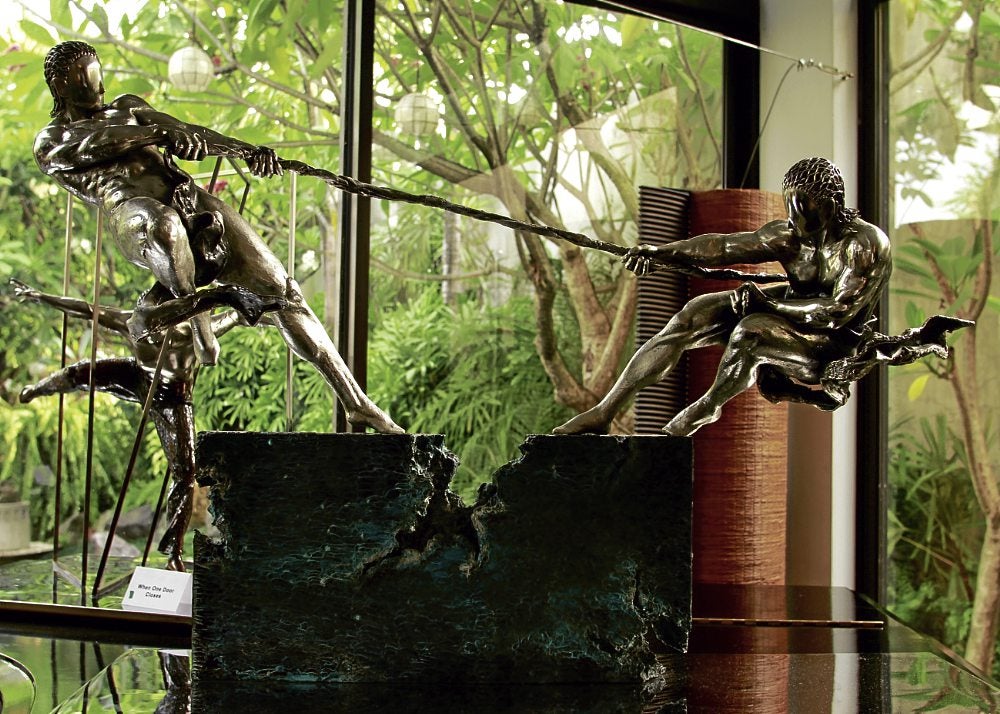 OPPOSITION and counterpulls are typical of De la Cruz’s works.

Sculptor Daniel de la Cruz has a precept in life: Older is better.

Pushing 46, he looks younger after losing 40 lbs on an almost carb-free diet. He is also outdoing himself in his 10th solo exhibit of metal sculptures, titled “Doorway to Decision,” which opens on May 20 at Pintô Art Museum in Antipolo City.

De la Cruz says “Doorway to Decision” is a breakout as he introduces new things—fine steel cables for figures to balance on,  lighting, muscular men and functional art. The 35-piece collection will also be his biggest not just in number but also in scale.

De la Cruz developed techniques of melding and shaping  lead, copper, brass, iron, nickel and bronze, known only to him. The sculptures manifest intangible factors that lend richness, distinction and power. Many of his subjects are human figures moving dynamically in space.

De la Cruz experiments with shapes. Some figures expand while others contract. Some bodies are formed in angular, curved or straight postures to convey authority, freedom or restraint. Some figures extend to their fullest length while others flow in a continuum from restricted positions to unbounded leaps. Some figures counter their force against each other to denote a dynamic tension that results in a balanced harmony.

“My works are more conceptual now,” he says. “It comes with age.”

“To Walk a Thin Line” is a tour de force wherein one man on the cable pulls up another man by the wrist. It’s exciting to see two hefty figures on opposite sides of the cable joined in the middle by a narrow piece of metal.

“No Dance Without a Dancer” is a human figure leaping in exhilaration, shrouded in ripples of metallic lace. De la Cruz says each flower and intricate pattern in the lace was fastidiously chiseled and amalgamated.

In “I Am Not What I Choose to Be,” the artist plays with levels by sculpting three women balancing on one foot while on one another’s head.

He introduced lighting in the garden fixtures such as the man holding a triangular shadow-casting instrument atop the sundial and a bench with three dancing figures.

“One Womb, One Mother” is a striking piece on a woman with a light in her womb as if symbolizing the soul in confinement. A gnarled tree grows out of her head. It is the artist’s statement on Nature: “We live in one world from the same Mother Earth but we don’t treat her properly.”

De la Cruz is known for his trademark Rubenesque women. In this collection, more male figures balance on steel cables. He says it was more challenging than the female form because of defining their musculature.

The works seem autobiographical, such as figures walking on a tightrope cable. “Life is about keeping a balance. A misstep and you fall,” says De la Cruz.

“Doorway to Decision” is a steel frame with sculptures above and below it, to symbolize walking through destiny on a leap of faith. A figure dominating a maze table makes a statement with the bends of rectilinear lines. The sculptor explains it symbolizes the turning points and bends in one’s life.

De la Cruz’s life has also been a series of bends and leaps of faith, just like his works. Coming from a family of doctors, he took up Philosophy but didn’t pursue law studies.

Following his inner artist, he worked for two handicrafts companies and moved up from a blue-collar job to manager to partner. He then ventured into industrial design, producing for such clients as Villeroy and Boch.

Earning well from his day job, he went on to pursue his dream of becoming a sculptor on his 40th birthday. He has since developed a reputation for his singular works and has exhibited abroad.

“Many can relate to the works when they see the titles,” says De la Cruz.

“Our War Within,” “He That Is Master of Himself,” “All Roads Lead to the Same Destination,” “The Darkest Hour Is Just Before the Dawn,” are all imbued with meaning.

“They make a connection with the viewer. That’s when the art is successful, when it forges a link,” he says.