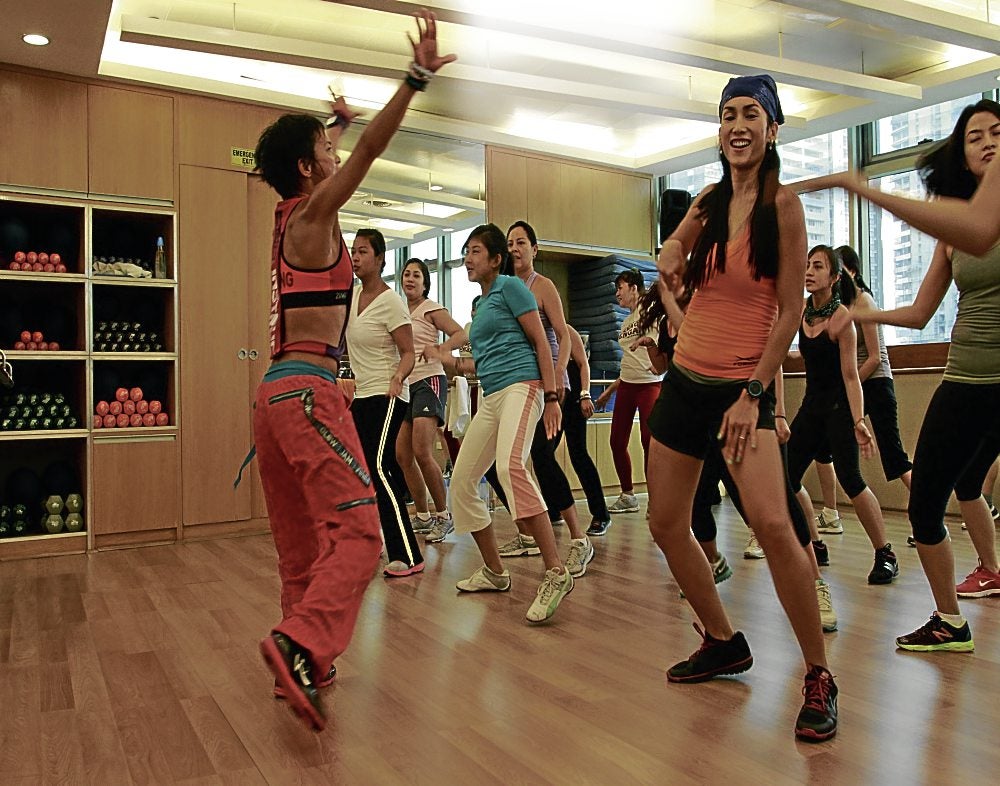 After giving birth, dancer-actress Ina Raymundo bought a Zumba instructional DVD just before the trend hit Manila. Aside from getting back in shape, doing Zumba at home with her eldest daughter, Erika, was an opportunity to bond.

However, she had to stop the video workouts when she had knee pain. Ina was dancing in slippers and doing some high-impact movements on a hard floor at home. She has been going to the hospital to strengthen the muscles around her knees.

Still, the trauma didn’t stop her from following her passion. Ina has been taking Zumba classes at Plana Forma studio and says dancing in a class is safer (what with the right flooring), more fun and more productive than doing a home video workout.

Aside from burning fat, it pumps up her blood. “I monitor my heart rate and it averages 150 to 160 beats per minute, which is good.”

Ina feels leaner and more toned. Despite having four kids, she’s kept her curvaceous figure thanks to eating five meals in small portions, strength training at the gym and doing Zumba for cross-training.

Zumba gives that liberating experience that enables people  to come out of their shell and  limber up.  Ina adds, “When you mature, you tend to feel rusty in dancing. With Zumba, I got my groove back. It’s sexy and the Latin music is engaging.”

She plans to revive Zumba home workouts with her daughters. “They love to dance and they’ve got rhythm.”

Ina advises women to wear the right shoes for Zumba to cushion the impact of the jumps and fast footwork.

Not a dance class

At Plana Forma, instructor Julie Alagde-Carretas starts Zumba by underscoring, “This is not a dance class.” She tells the participants that if the moves are too fast or too complicated for them, they can just move laterally, march in place and raise their hands to the beat of the music.

“Even if Julie says it’s not a dance class, it feels like one,” says Iya Lagdameo, director of LC Corp., which owns the Plana Forma studio.

Iya said Zumba’s cardiovascular marathon complements the Plana Forma classes which targets the smaller muscle groups that support the big muscle groups.  “After taking Zumba five days a week, I lost weight quickly. My clothes got loser and my bones came out.”

After a Zumba class, she feels exhilarated. “The endorphins are high after an hour of intense workout. I look forward to each class because it’s always different.”

She is proud of instructors Carretas and Gino Ong, both dancers, who were handpicked by David Velez, Zumba education specialist for South East Asia and China, to be the front-runners in the Zumba launch in the Philippines.

Iya’s sister-in-law Tina Lagdameo, marketing director of Go Nuts Donuts, said Zumba builds endurance. “After a run, I feel like passing out. But after Zumba, I feel regenerated!”

Part of Tina’s job is to taste doughnuts every week. “With Zumba, I burn for the doughnuts so I can eat again.”

Zumba is family time for Menchu Gonzalez-Mantecon of LifeCycles events company and her daughter Bea. “I lost weight without having to diet,” says Menchu on the benefits of Zumba.

Bea adds, “When I’m too lazy to work out, I do Zumba. It doesn’t feel like exercise.”

Former gymnast and SEA Games medalist Danica Calapatan has found expression in Zumba. “No one will judge you if you’re right or wrong. I love the group energy!”