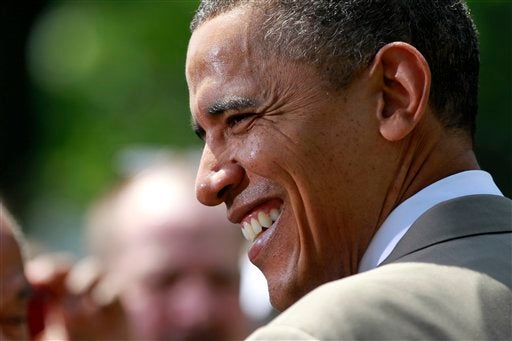 WASHINGTON – Newsweek made no apologies Monday for anointing Barack Obama as “the first gay president” on its cover this week, matching its rival Time in terms of online buzz.

It depicted Obama with an angelic rainbow halo just days after Obama became the first sitting president of the United States ever to come out in favor of same-sex marriage.

“Obama’s earned every stripe in this haloed rainbow,” said Tina Brown, editor of Newsweek and its online counterpart The Daily Beast, on her Twitter account (@TheTinaBeast).

White House press secretary Jay Carney, asked what Obama thought about the cover, said Monday: “I don’t know if he’s seen it and I haven’t spoken to him about it.”

Newsweek’s cover followed Time’s jaw-dropping cover photo of a Los Angeles mother nursing her three-year-old son aside the headline “Are you mom enough?” for a feature on so-called “attachment parenting.”

“I do understand why Time chose this picture because … it did create such a media craze to get the dialogue talking,” the mother, Jamie Lynne Grumet, told NBC’s “Today” program.

Time claims a total print circulation of 3.3 million, just over double Newsweek’s 1.5 million — and both titles have been struggling to sustain their newsstand sales, which hinge in large part on a given cover’s impact.

Newsweek executive editor Justine Rosenthal, speaking in a video on its website, said the magazine had another cover story in the works, but ditched it “after Obama ‘came out’, not to coin a phrase,” last Wednesday.

Several versions of the cover image were considered, including one with Obama “holding a married (same-sex) couple like a wedding cake,” she said.

The online edition of PR News, a public relations trade journal, noted how Newsweek had been trying to create a “#firstgaypresident” hashtag trend on Twitter — something that would send more traffic to its website.

“Rival publications trying to one-up each other with provocative covers is nothing new, but Newsweek’s Obama cover is too obvious a publicity-seeking ploy, and smells of desperation from old media,” it said.

It noted, however, that Time had sold more online subscriptions on the day its controversial cover appeared — just in time for Mother’s Day in the United States — than it had for the entire week before.