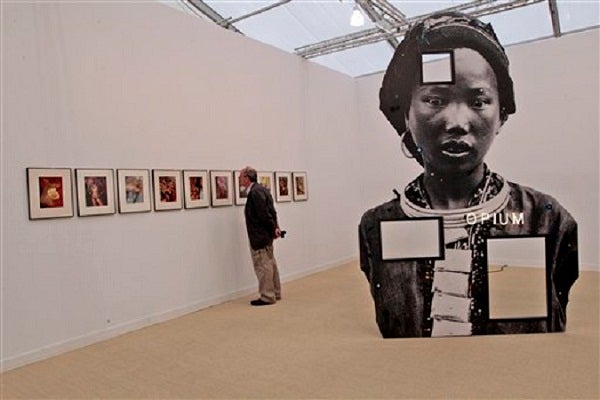 A visitor to the Frieze New York Art Fair inspects "Girls of the World" by Linder on display next to "Opium" by Lothar Hempel at the Stuart Shave Modern Art Gallery, May 4, 2012 on Randall's Island in New York. The prestigious Frieze New York Fair is getting competition from Art HK, which expects a bigger crowd than last year’s 63,511. By comparison, the Frieze New York Fair earlier this month attracted a reported 45,000 visitors. AP/MARY ALTAFFER

HONG KONG—Asia’s premier art fair opens Thursday in Hong Kong, bringing artists, collectors and dealers from around the world to a city whose booming market illustrates a shift in wealth from West to East.

The four-day event known as Art HK, now in its fifth edition, has booked 266 galleries from 38 countries, its 50-50 balance of Western and Asian making it unique in the art fair universe.

A record 63,511 visitors attended Art HK last year, and organizers expect a bigger crowd in 2012 as Hong Kong stakes its claim as one of the art capitals of the world.

“We’ve had over 700 applications this year for 266 spaces in total,” director Magnus Renfrew told AFP, adding there had been a marked increase in applications from Western dealers compared to 2011.

“The art market tends to follow the money and the greatest source of wealth at the moment is in Asia,” he said ahead of Thursday’s public opening.

Traditionally known as a center of banking and finance, the city has become a hub of all things luxury – from fine wine to fashion and, increasingly, art – thanks to the explosion of personal wealth among mainland Chinese.

Hong Kong has surged to third place in the global art auction market behind New York and London over the past five years.

Western gallery owners are now falling over each other to open franchises in the former British colony. Some of the most expensive rents in the world are apparently no obstacle in the rush to get a foothold in the Chinese art market.

Gagosian, White Cube, Acquavella, Simon Lee and Pearl Lam are just some of the recent arrivals. The government is weighing in as well, with a massive art and culture district being developed on the harbor in Kowloon.

“Since Art HK’s first edition four years ago, Hong Kong has been gradually transforming into a contemporary art center to rival London and New York,” said Hong Kong-born Lam, who is better known in the West than in her home town.

“I am elated by and proud of these changes and want to contribute to this continuing transformation.”

Asia’s art boom has also caught the eye of the world’s biggest art fair franchise, Art Basel, which bought a controlling stake in Art HK a year ago. The Hong Kong fair’s 2013 edition will be held under the Art Basel banner.

“We are delighted to be launching a new Art Basel show in Asia. Art Basel has been observing the phenomenal growth in the art scene in Asia for years,” Art Basel co-director Annette Schönholzer said in a statement last week.

She said Art Basel’s first Hong Kong show would aspire to “play a central role in creating new bridges between the Western art scene and the rapidly emerging contemporary art scene throughout Asia.”

Renfrew, who will stay on as fair director next year under Art Basel, said that when he started organizing the first Art HK in 2008 people told him the city was a “cultural desert.”

But those days were now a distant memory.

“It’s a very exciting time. Different elements of the cultural ecology of Hong Kong are beginning to come together,” he said.

While there was no escaping the speculators, Renfrew urged buyers at this year’s fair to think of art as an investment in something with intrinsic value rather than just a play on rising prices.

“In times of economic difficulty, often art is seen as a safe holder of value and protector against inflation. But we would really like to encourage people to buy art for love rather than for money,” he said.

The record prices for high-end art come despite, or perhaps because of, the turmoil in the eurozone and on the world’s stock markets, as investors with cash to burn look for other places to park their money.

A Sotheby’s auction in New York last week brought in a total of $266.6 million, double the $128 million from the same May contemporary sale last year.

And at Sotheby’s Impressionist and modern sale the previous week, the only privately owned version of Edvard Munch’s “The Scream” went for $119.9 million, the most ever paid for any art work at public auction.