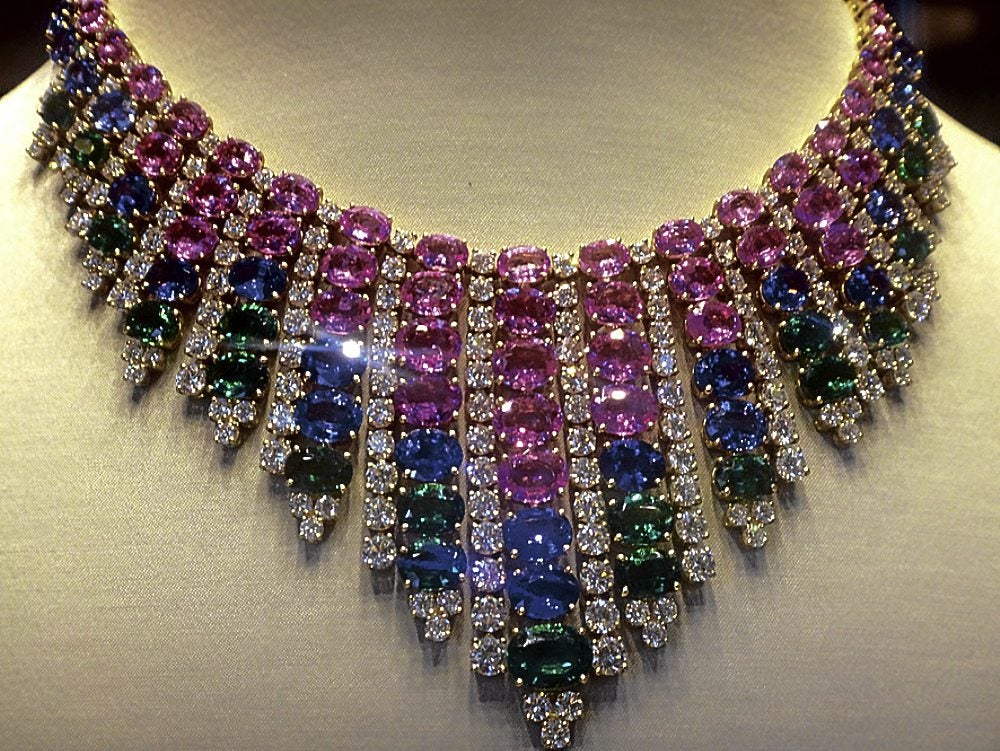 If there was any doubt that Asia is the brilliant gem the world is lusting for in this century, that should have been allayed at the awesome sight of the Bulgari High Jewellery Collection that was exhibited for the first time in Asia, at the Presidential Suite of Fullerton Bay Hotel at Marina Bay in Singapore.

Like other prestigious luxury brands, Bulgari is drawn more and more to the Asian market.

It’s a synergy of fates—Bulgari has the heritage of exquisite jewellery to offer, and Asia is ready and now has the means to appreciate it.

A select audience three weeks ago saw up close the dazzling color and glitter of diamonds, precious and semiprecious stones that cost up to hundreds of millions of pesos. These were one-of-a-kind contemporary jewelry.

In previous years, Bulgari has brought its retrospective collection to Asia, particularly to China. The collection featured iconic jewelry worn through the century, and in most cases, owned by celebrities, including legendary Hollywood actresses Elizabeth Taylor (although her famous pieces didn’t make it to the China retrospective anymore because her estate put them on the block after her death), Grace Kelly and Gina Lollobrigida.

The exhibit last month in Singapore was different—they were contemporary, created on the basis of drawings, and were centered on fine gemstones which Bulgari, particularly the Bulgari family, has had in its possession for a long span.

The high jewellery collection has more than 1,600 pieces, which are displayed on rotation in major Bulgari stores worldwide, so the quantity differs with each venue.

The main eye-grabber in the Singapore exhibit—they were all eye-poppers—was a 36-carat emerald pendant that was as brilliant as it was solid. It dangled on the model’s alabaster-smooth neck that night at the welcome party for media at the poolside at the rooftop of Fullerton Bay.

One of the most famous Bulgari designs—the serpenti watch—was on exhibit. The serpenti or the snake design figures prominently in the Bulgari heritage. The snake is the symbol of immortality and infinity—which is concretized in the serpenti’s seemingly endless coil on the wrist.  One serpenti design used white-gold and round brilliant-cut diamonds; another used pink gold and mother-of-pearl.

The Singapore exhibit showcased Bulgari’s fine aesthetics, its sense of volume, and its distinctive way with precious materials and color that have been its hallmark the past century.

The immediately recognizable mark of Bulgari—its signature style—is the use of colored stones. According to Bulgari history, in the ’60s, Bulgari weaned itself away from the influences of the French school of jewelry-making and began to develop its own style—it innovated with eye-catching combinations of colored, precious and semiprecious stones.

Another essential feature of Bulgari style evident since the ’60s has been the cabochon cut. The use of cuts with smoothed, rounded contours gives the jewel a sense of volume. The cabochon cut has come to be regarded as the Bulgari cut par excellence. The cabochon cut is traditionally made by polishing the rounded surface of the table of the stone; it was used for more decorative semiprecious stones. Bulgari exploited the potential of this cut.

The Bulgari style continues to be defined by jewels with linear, smooth and rounded contours, a sense of volume and original color combinations.

This was so evident in the Fullerton Bay exhibit—the dazzling marriage of glitter and color.

For the media welcome on the eve of the exhibit opening, the poolside of the Fullerton Bay was transformed into a lush tropical setting that sparkled with lights and lanterns amid the Marina Bay skyline.

As food and drinks were served, models showed off these high jewellery pieces.

At the afternoon reception on the day of the exhibit, Bulgari High Jewellery senior director Gianpaolo Della Croce spoke of how they at Bulgari regarded their jewelry as “babies. We select them, we craft them, we saw to it that each one has a personal connection to the wearer.”

One diamond neckpiece paraded by a model was so intricate—it was inspired by the intricate Venetian lace.

For the first time, Bulgari eyewear studded with precious stones was included in the High Jewellery exhibit. It was indeed regarded as jewelry.

One easily saw why. The shades were decked with sapphires, diamonds combined with acetate, metal and enamel.

Explaining the craft and art of jewellery to women is like speaking to the converted. But nonetheless, we found the Bulgari literature so informative that it made one further understand and appreciate the art of jewelry marking.

According to Bulgari, “The key element in the creation of a high jewellery piece is the stone or set of stones that compose it. The creative process begins with the cut, carat weight and color of the gems, and the jewel’s design is conceived to fully enhance the intrinsic characteristics of the stones.

“Expert knowledge of gems and cuts is fundamental in developing a high jewellery collection, a field in which Bulgari boasts more than 100 years of traditional excellence.”

Bulgari sources its gems mainly in New York, Geneva, Bangkok and Colombo. The most valuable emeralds come from Colombia, sapphires from Kashmir, rubies from Burma. (Bulgari, however, has never purchased gems directly in Myanmar but only in the international markets.)

When it comes to diamonds, the company uses cut stones only, and works with highly selected suppliers in countries that comply with the Kimberly Process.

The stone is handled by the lapidary—a good cut enhances the qualities of a gemstone. The cut of every stone, even the smallest, is of paramount importance in a Bulgari jewel.

Expert gemologists in Bulgari examine and classify every stone to meet the highest standards. (The most important colored gems come with the Bulgari Color Certificate.)

The creative process of design is long and complex, since many designs are drawn up before the final choice is made.

The initial idea comes from a team of designers working under the guidance of Paolo Bulgari, chairman of the Bulgari Group.

The unique pieces of high jewellery are usually created from a particularly important and precious stone, around which the design is developed. The challenge lies in identifying the form that best shows off the unique characteristics of the stone—its cut, size or color.

When the design is rendered, complete with detailed images, the raw materials department sets the stones in wax to determine, with the designers, whether they comply exactly with the proportions of the approved design.

Then the Bulgari high jewellery in-house workshop begins creating the actual jewel according to the instructions it receives.

It takes a very long time to create a piece, from a minimum of three months to more than a year.

The creation of a unique piece of high jewellery even spawns anecdotes. Often, a stone or a set of stones of extraordinary beauty is found, but this is not enough to create a jewel. Months, even years, pass before a complete, balanced set is produced, with gems that all have the same shade of color, carat weight or balanced carat weights—to guarantee the perfect symmetry of the object.

Bulgari has been associated with the distinctive use of semiprecious gems such as tourmalines, amethysts, citrines, coral, pearls and garnets, frequently combined with rubies, emeralds and sapphires—the new and unusual tones of violet, pink, and intense reds, greens, oranges and yellows.

Bulgari explains, “The result is a nearly infinite variety of chromatic combinations, from the most vivid and contrasting to the most delicate and nuanced.

“Bulgari is also famous for having handled historically important colored stones, such as carved emeralds and ruby beads belonging to the fabled collection of the Nizams of Hyderabad, Muslim rulers whose authority once extended across much of southern India.

“The combination of precious and semiprecious stones is still one of the most important features of Bulgari jewels. Pink tourmalines, rubellites, turquoises, garnets, peridots and citrines are combined with diamonds, colored sapphires.”

While you may not necessarily be able to own these jewels, it is really enough to have studied them up close, like we did in Singapore. Bulgari high jewellery, after all, is awesome art.