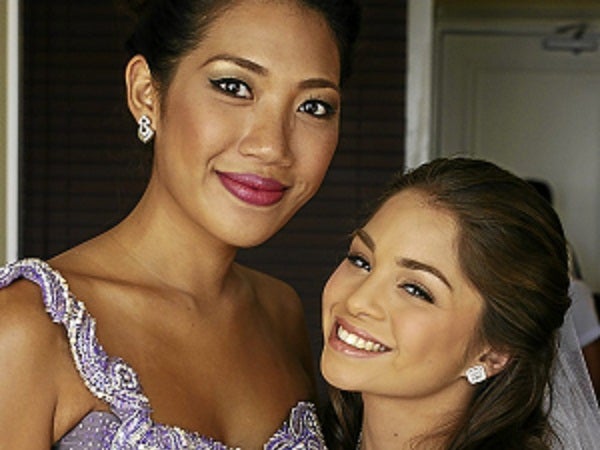 The church was a sea of lavender and white flowers that late Friday afternoon.

Sasha, as she is known to friends and family, met Ray (Raymond) in middle school at the International School of Manila. Theirs was a romantic relationship that did not blossom until later. The two were good friends who reconnected years after high school while Ray was enrolled in university in California and Sasha remained in the Philippines. Theirs was a long-distance affair.

Having known the bride for 20 years and having been there to share almost every milestone in her life, I was still surprised when Sasha asked me to be her maid of honor, although truth be told, we had broached the idea to each other since we were 10.

Today, 15 years later, fast-forward to the wedding ceremony, my mind flashed back to the time we were playing with Barbies, or staying up past our bedtime drinking root-beer floats, or prank-calling and dialing numbers of our crushes.

We are far removed from those days now (sort of), and there I was relishing the moment—my best friend’s wedding.

There she was, gliding on the aisle in an elegant Rajo Laurel gown, with hints of lace around her shoulders, reminiscent of a Grace Kelly gown. I fought to hold back the tears (my mascara was not tear-proof).

The man she had chosen to be her life partner stood before the altar, with his best man and brother, Paul del Rosario.

A most touching moment was when the bride’s father, Fred J. Elizalde, with Sasha’s grandmother, Adela Salas Gatlin, gave the bride away. The sight left the 300 or so guests teary-eyed.

After the ceremony, the newlyweds rode away in the Elizaldes’ classic 1954 Silver Dawn Rolls Royce. It is said that this was the same car the Beatles rode during their brief visit here in the ’60s.

At the reception at The Natural History Museum were 500 guests.  Gia Macuja Atchinson, the younger sister of Sasha’s stepmom, the great ballerina Lisa Macuja Elizalde, sang a most romantic “Moon River.” Gia’s husband, Robert Atchison, accompanied her on the violin. Lisa and her mother Susan Macuja were tearing up as they listened to Gia.

For the couple’s first dance, the groom’s father, Bobby del Rosario, led his band, “A Special Something.”

The reception bore a familiar and intimate touch, with the closest friends of the couple playing emcees.

Margarita Fores prepared the five-course meal. The wedding cake was a feast for the eye, designed by Marta’s Cakes. The five-tier chocolate cake showed Ray’s affinity to polo horses. The couple’s two Australian Shepherds also had their likeness atop the cake.

What I loved most were the speeches, from the poignant one of stepmother Lisa to those of the  groom’s parents, Bobby and Moleen del Rosario, to that of the bride’s cousin Santi Elizalde, and brother Juan Elizalde—the toasts were incredibly touching and funny.

It was an evening to remember and cherish; it was a beginning for Sasha and Ray. A quote I meant to share with them that evening, but failed, goes: “A successful marriage is basically an endless cycle of wrongs committed, apologies offered, and forgiveness granted… all leavened by the occasional orgasm.”—Dan Savage

And no, I did not catch the bouquet.