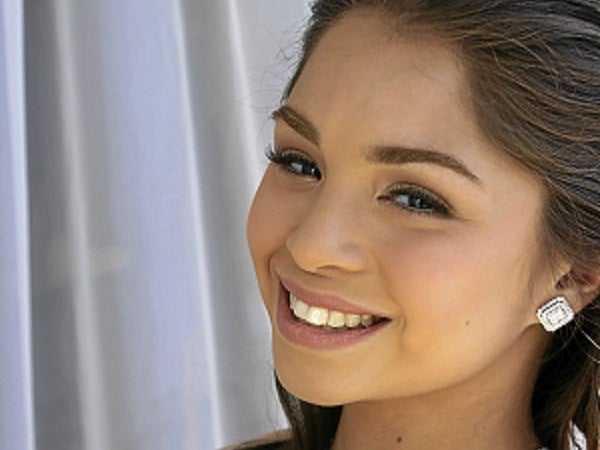 Thalassa “Sasha” Gatlin Elizalde-Del Rosario is born lucky. She is an heiress twice over, being the sixth of broadcasting magnate Fred J. Elizalde’s eight children and the sole inheritor of her maternal grandmother, Adela Catigbac Salas-Gatlin.

“Sasha doesn’t need to work. But she does, which is admirable,” said stepmother and ballerina Lisa Macuja-Elizalde.

Turning 27 this July, Sasha is at an age where she faces more responsibilities in her career and a new family life. Fred has plans to make her one of the heads of Manila Broadcasting Company, the oldest radio company in the country.

“Doña” Adela had bequeathed properties to her, being her only direct descendant after the death of Sasha’s mother, Joan Gatlin, in 1996. Since she was still a minor then, her father was named administrator of her inherited estate.

“Several years ago, she (Adela) dropped everything onto my plate. My main focus of work are our real estate properties in Batangas and Metro Manila,” said Sasha.

Adela hails from Lipa, Batangas. When her brothers were killed in World War II, and after her mother died, she took over the family sugar and molasses business.

“She turned their farming business into one of the biggest in the history of the sugar industry of Lipa,” said Sasha.

“At 91, she is still very active. Madel, as I call her, since she doesn’t like being called grandma, is one tough yet super-cool woman. She loves to talk about what a real-life dancing queen she was back in the day (tango being her forte). We have a very strong relationship. She loves keeping up-to-date with everything about my life.”

Sasha never imagined that she would one day be running her own business, the TGE Group of Companies which she acquired from Adela.

“With all the new developments in real estate, you always have to be on your toes. It’s quite a fast-paced and challenging job for something that one might expect to be boring,” she said.

She describes the course of her life thus far as initially going downstream with a strong rush. Through time, events began flowing upstream with gentler currents and, invariably, a steadier flux.

The downstream years were her childhood.

At barely 18 months old, she was diagnosed with liver cancer.

Fred and Sasha’s mother, former beauty queen Joan, took her to Pittsburgh Children’s Hospital in Pennsylvania. No less than liver-transplant pioneer, Dr. Thomas Starzl of the University of Pittsburgh, took the risk of operating on the infant Sasha. She underwent a series of chemotherapy sessions and has since been taking maintenance medication to protect her immune system and reduce the risk of organ rejection.

Sasha bounced back to health until she had an infection from bird poo found in the swimming pool. Doctors from Pittsburgh had to be flown in. Again, she survived.

Through these travails, Sasha lived normally.

She has fond memories of Joan, whom she considers one of the most influential persons in her life, aside from Fred. Whenever Joan would bring her to her classes at International School of Manila (ISM), everyone’s face lit up; such was her mother’s charm.

“My mom raised me throughout my most influential years—on morals, etiquette, essential life lessons, and a whole lot more. A lot of who and what I am today is because of her,” said Sasha.

However, the “tween” and teen years were turbulent periods. “First, my mother’s passing. I was quite young, and desperately needed my mother to continue guiding me into the rough terrain of life that I was about to enter. Second, a new mother and family were being introduced into my life. It was a complete surprise to me, and it took a lot of getting used to in such a short time.”

In May 1996, Joan died when Sasha was barely 11. Friends and family spent a lot of time with Sasha to help her overcome the grief.

“I definitely could not have done it alone,” she said.

In 1997, a whirlwind courtship between Fred and Lisa was followed by a grand wedding where Sasha was a bridesmaid. Sasha and Lisa had already known each other through Joan, who was a patroness of Ballet Manila. Joan brought Sasha to meet Lisa after a performance at Manila Polo Club.

On Fred and Lisa’s honeymoon in Egypt, Sasha and a gaggle of close friends and relatives came along.

In the family home in Pasay, Lisa became an instant parent. She had to be patient with Sasha’s adolescent moods, attended parent-teacher conferences in her school, looked for math tutors and even an alternative school when she didn’t pass her math subjects.

Sasha’s first job at 13 was as production assistant for Ballet Manila.

“She was more like a younger sister,” said Lisa, whose stepdaughter calls her by her first name.

One day, Lisa got a surprise call from ISM. It was about the letters she allegedly signed, asking Sasha to be exempted from swimming class. It turned out Sasha had been forging her stepmother’s signature.

Instead of feeling anger, she empathized with Sasha who suffered discomfort when she had to change clothes in front of people. Sasha felt self-conscious about the scars from her liver transplant. Diplomatically, Lisa explained to Sasha that honesty was still the best policy.

After graduating from ISM, Sasha studied at De La Salle University then pursued her online degree at University of Berkley, California.

After school, she worked for the different MBC radio stations. Just as Fred worked in the different businesses of his father, “don” Manolo Elizalde, Sasha was being groomed for top management.

Sasha described her father as “one-of-a-kind, a great businessman, an incredibly kind soul, a genius.”

Growing up with him was like being in a different world. “It’s really hard to put into words. Every day as a child or teenager, and until now, it feels as though I’m living in a Cirque du Soleil show or an encyclopedia.

“He’s taught me so much. But the most valuable lessons are to work hard; strive for success; treat everyone properly (employees, executives, associates, family ) and fairly. Never forget that what you are or what you have you couldn’t have accomplished without the help of others. Don’t neglect those who have helped you.”

Hence, her emotional intelligence has been one of her strengths.

“When you meet Sasha, she will strike you as shy. But deep inside, she observes. She is very perceptive and responsive to other people,” said Lisa.

She also pointed out, “Sasha can also drop everything else and be very supportive of Ray.”

For Sasha, the turning point was finding the perfect match. She and Ray del Rosario had known each other since eighth grade at ISM.

“I’ve had a crush on him, but I just never entertained the thought because I cherished our friendship too much,” she said.

They had lost touch with each other after high school but were reconnected through Facebook.

In 2009, Ray was on a holiday from Pepperdine University in Malibu, California. They went out for coffee at the Mall of Asia to catch up.

“Little did we know that sparks would fly between us and that it would lead to consecutive dates,” she said. Among them were Ray’s polo games.

Sasha planned to spend only a month in California to visit Ray, but her trip was extended. She was with him during his junior and senior years at Pepperdine with trips to Manila in between. Sasha became domesticated and learned how to cook.

When Sasha came home, she and Ray had a spat on Skype. Lisa advised her to work things out with him. It was then that Sasha took the next plane to the US.

“My adult life is a product of her (Lisa’s) teaching and support. She has taught me to go for what I believe in or go for what I feel is the right thing to do, but to always weigh the pros and cons; to think practically about my actions in life.”

During a family vacation in Boracay in January 2011, Ray told Fred of his plan to propose marriage to his daughter, seeking his blessing in the process. Ray wanted to keep it a secret from Sasha.

He proposed to Sasha in springtime in a spot overlooking the ocean in Point Dume, Malibu.

“The moment was perfect. The sun was setting and seagulls were flying overhead. The weather was just right, too,” recalled Sasha.

Instead of champagne, they toasted with ginger ale (Sasha doesn’t take alcohol.)

Among his plans is to building a mixed-use center in Quezon City.

In August 2011, the couple had a civil wedding at the presidential suite at the Peninsula Manila.

With their two collies, they moved to a Makati subdivision.

Last April 20, the couple had their second wedding at San Sebastian Church. Rajo Laurel designed the gowns of the bridal entourage.

The newlyweds rode the vintage Rolls Royce owned by Manolo, and held their reception at National Museum, with Margarita Forés doing the catering.

The honeymoon was at Amanpulo, made merrier with the Elizalde and Del Rosario families.

Sasha is looking forward to being an early nester. Some years ago, she was given a more potent maintenance medication that she could be weaned from so she could have a normal pregnancy.

She feels confident about what lies ahead.

“I’m strong emotionally, mentally after everything I’ve been through. When something is asked of me, or if I know I am in the position of helping or doing some good for a cause or a person (or persons), I do try my best.”