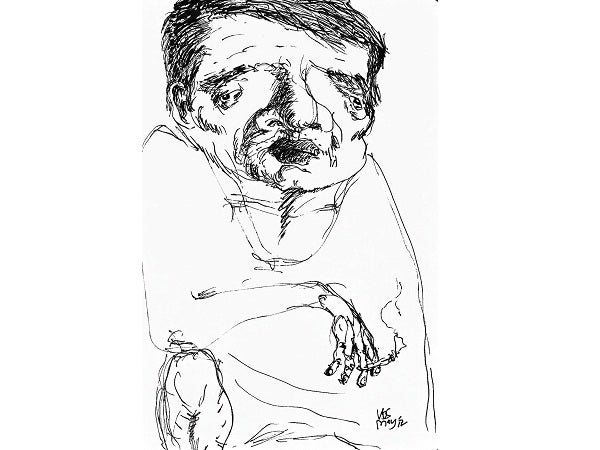 I wouldn’t hang that in my bathroom.”

The remark has become quite infamous since one mortal made it upon coming into virginal contact with Onib Olmedo’s art. Bettina Olmedo herself overheard it early in her husband’s career as a painter, from a society matron who, like many at the time, bought a painting for one of two reasons, or both: as an ornament of interior decoration and as a coveted item by an artist in current demand.

Truth to tell, in the ’70s, before it bled more vibrant colors, Onib’s dark and distorted art had not been easy to get used to. Indeed, it may be that gallery-goers, unlike our matron, who now must rue the day she not only passed up the chance to acquire an Onib but in fact pooh-poohed it, withheld their judgment out of either fear of exposing their ignorance or plain politeness.

But then again, only a few seemed to suspect or recognize Onib’s genius when they saw it. In any case, it’s the collectors among them who now should be realizing their fortune from his genius, for, as we all know now, despite a relatively short career—he was dead at only 59—his place is secure in the pantheon of contemporary art. (A tour of his art to commemorate his 75th birthday, on July 7, has begun. The first exhibit opened May 5 in Bacolod City and will go on until June 15. It goes to other cities from there.)

My husband, Vergel, loved Onib’s art at first sight, although he counts his Onib fortune in their moments of friendship—two pastel portraits of him hanging large and prominent in every living room of our life of many removals are a constant reminder of that friendship.

He had not known Onib before he became an artist, but had an idea of his previous, short career as architect, a career that may have seemed promising, judging alone by his seventh place in the licensure tests.

He saw one of the four houses Onib had built, that for a brother in a village in Pasig City, and found enough capital to use to rib him for the rest of their days: “Good thing you stopped building houses: You did it just the way you paint—tabi-tabingi.”

There’s actually his partner, his best friend in college, to thank for Onib’s career switch—Manolo Evalle: He immigrated to the States, and continued building proper houses.

Vergel and Onib met at the weekly Woman’s Home Companion, founded in 1972 by Vergel’s seniors Eggie Apostol and Rod Reyes shortly after their newspaper, the Manila Chronicle, had been closed down by Martial Law. It was a safe enough magazine to publish. Vergel was copy editor, Onib the illustrator.

Every workday the two would spend their off-hours talking about pretty serious stuff—literature, art, music, the philosophies of life—or playing chess.

“We also chatted and laughed a lot,” Vergel, points out, lest they be classified strange. In fact, they lost track of time going on and on such that Bettina languished in interminable waiting for her pickup in her advertising office.

Vergel had found a kindred spirit in Onib—I dare say, perhaps the only real one—and could not have honored him more than when he chose him to be godfather to his second child, an only son, Paolo.

Onib cajoled Vergel to draw—they in fact shared a power to threaten and, in Vergel’s case, test friendships: The moment he brings out his sketchpad people suddenly remember appointments to rush to; those unable to escape have been heard to say, with a pained smile, “Well, what can I do, if that’s how I look to you.”

Which was sometimes the reaction of some of Onib’s subjects, too. His daughter, Bambi, from her babe’s mouth, had asked Onib, “Daddy, bakit ang galing mong gumawa ng pangit?”

If only in artistic predisposition, you could say the same with Vergel. Only very secure subjects would be willing to be drawn by him, but the not-so-willing have a little chance to escape either: Trained as a journalist to work under the closest of deadlines, he can do you in seconds, if that’s all the time he has, on any paper—table napkins and placemats in restaurants often prove the most handy.

In the early ’90s, learning Onib had suffered a stroke, Vergel went to visit him in his old home in Sampaloc. They promised to get together again. And bumping into him and Bettina not long afterward, we invited them home for after-dinner drinks.

Onib was looking better, in fact back at tennis, he said. He even asked me to cook him his favorite bacalao for their next visit. I couldn’t have missed the stern face Bettina flashed at the mention of his favorite dish, now potentially dangerous for its load of salt. Still I made him the promise, even then already beginning to think of how I could make bacalao safe enough for him.

But before his bacalao could happen, he died quite unexpectedly—at home, in the early morning of Sept. 8, 1996.

As it happened, Onib left women friends special enough for them to feel themselves widowed—fellow artists, gallery owners, wives of friends. Gilda Cordero-Fernando and Odette Alcantara were two I knew better than the others. And I’ve always wondered how women like them, achievers in their own right, evidently complete in themselves, could take the loss so singularly as to proclaim themselves “Las Viudas de Onib.”

These viudas remember everything about Onib, delighting in the endless retelling of jokes and anecdotes he had told and were told about him.

Vergel and I have become regulars at memorial dinners for Onib with most of the viudas and two of Onib’s best friends, Manny Arriola (whose own wife, Peng, is an Onib widow) and Alan Cosio, with wife Ivy, in attendance. In one, we held hands in a séance-like chain around the dinner table taking turns saying a prayer for Onib. Suddenly, Manny’s phone rang registering a call from my own phone, which could only have called on its own because my hands were engaged, one in fact with one of Manny’s own. We all thought it an Onib prank and never did any such thing again.

Onib’s stories and poems were side-splitting and as wise as they were clever. If Philippine history had been written by Onib, we’d certainly have felt better about ourselves.

At a program during his latest exhibit in Ayala Museum, Bettina asked Vergel to read Onib’s deservedly irreverent story about Magellan’s landing. We had heard it many times and just as often laughed as hard. Onib had a way of imbuing everything he left behind with a never-fading freshness.

Gone 16 years now, he didn’t get to walk either of his daughters down the aisle, didn’t get to see his grandchildren. But the essence of the man is in their veins—a legacy in blood.

As for Bettina, who shared his heart and bed, memories will have to suffice: Such men, I’m told, are irreplaceable in both.