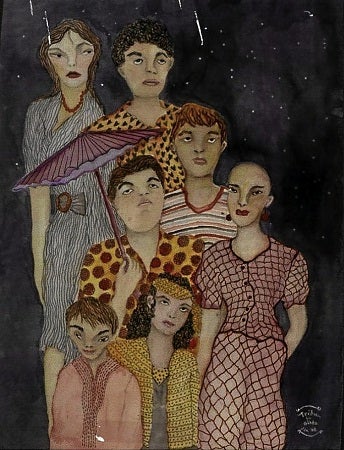 People are more fun in the Philippines

After lunch, some Sundays, my son and his wife take me to a Thai massage place called TonTon, a quiet oasis in the neighborhood. Uniformed girls with powerful arms who take you over remind me of a DI in Rose’s studio. His name was Jiggs and he had a girlfriend who was a masseuse.

Jiggs had shoulder-length hair in a ponytail which, according to my contemporaries, made him look either like a gay or a drug addict. They preferred clean-cut DIs and engaged him only when there was no one else.

But Jiggs was my favorite! Why? Because I wasn’t interested in becoming a good Argentina tango dancer. Jiggs wasn’t de numero. He would let me loose in the middle of a sequence to choreograph my own dance, and he invented his own steps, too. It was fun. A number of times he swept me off the floor and lifted me so high (posed like a winning contestant, of course) that I could touch Rose’s chandelier.

More than all that, Jiggs was a great storyteller. Between dips, he would tell me about his life, in installments, the wife and child that he loved, and his “fatally attracted” girlfriend who worked in a massage parlor.

Whenever Jiggs tried to break up with his girlfriend, she would attempt to kill herself. A row of scars adorned her wrist. Whenever she made a suicide try, however, he was able to intercept it.

Once Jiggs was absent from dance class. The girlfriend had slashed her wrist again, he told me, because she had learned that he had plans of working abroad.

When Jiggs got to her, blood was spurting out of her wrist like a small fountain and so he pressed his thumb on the wound. She was sobbing hysterically and he held her down, shushing her and saying he loved her, etc., etc. He couldn’t ask for help because every time his thumb was dislodged the blood would arc out of the slash again.

It took more than an hour before he could stanch the flow and the girl could be brought to the hospital.

A month later, Jiggs stopped dancing at Rose’s. We learned that he had left for Saudi.

No one ever calls him anything but Mr. Sena. Everybody loves him because he is a very encouraging teacher. No matter what your style is, no matter how talented or lousy you are, Mr. Sena makes you feel like you will end up a famous artist.

Last Thursday, Mr. Sena did not wince when I told him my age. He said his own mother had just turned 95 but was still spry enough to steal away to the turo-turo at the corner.

On her 95th birthday, Mr. Sena swept her off her feet and cradled her in his arms like a baby. He had a photo of it and sent me one. It’s somewhere in this article.

I always wondered why I have a resistance to bangus. Maybe because at one point in my life I had a surfeit of it.

We once had a cook named Candé. When she was applying for the job, I asked her what kind of cooking she did and she said, “Everything!”

She insisted on going to market herself and always bought bangus. Whenever we bought chicken or anything else it remained uncooked in the freezer.

We didn’t want to let her go because she was industrious and we hoped to interest her in washing clothes instead. Once, in the middle of the night, I saw her cooking a whole big wok of paksiw na bangus. Before I could make a comment, Candé  said she was cooking it for our family. She said nobody could stop her because she had bought all the ingredients with her own money.

Eventually we began to eat out. Candé took the hint and resigned.

An old artist friend, Jaime de Guzman, was once married to a lovely, hippie English maiden named Anne, and they had seven children. They lived by a river in Liliw, Laguna. My friends and I often visited them and bought their pottery.

The children lived wild and free. Since there were so many of them it was difficult to bathe them individually. So the first thing the kids did each morning was to jump into the river for their ablutions.

Eventually the family decided to relocate somewhere in the North (can’t remember where, this was sometime in the ’70s). I happened to be in the area at the time (I can’t remember why either) and Jaime asked me to visit the house he had found on top of a small mountain. He had to haul water from a well at its foot.

I didn’t realize the family had not relocated yet. Only Jaime and their earthly possessions, which were still in bundles and boxes and baskets. So there I was amid the chaos.

Without hesitation Jaime pulled out three batik pillows from out of a carton and put them around the low table. He put what looked like a sarong over the table top. He found a battered kettle, boiled some water, and we had tea. A few candles and incense sticks were spirited out and lighted.

We even had some dinner—several boiled camote from his backpack and a piece of hard jerky that he said was venison. All of these were served on Ann’s beautiful handmade dishes from another basket. We toasted on tapuy.

That, I think, is the gift of the true artists—they can conjure magic on the spot!