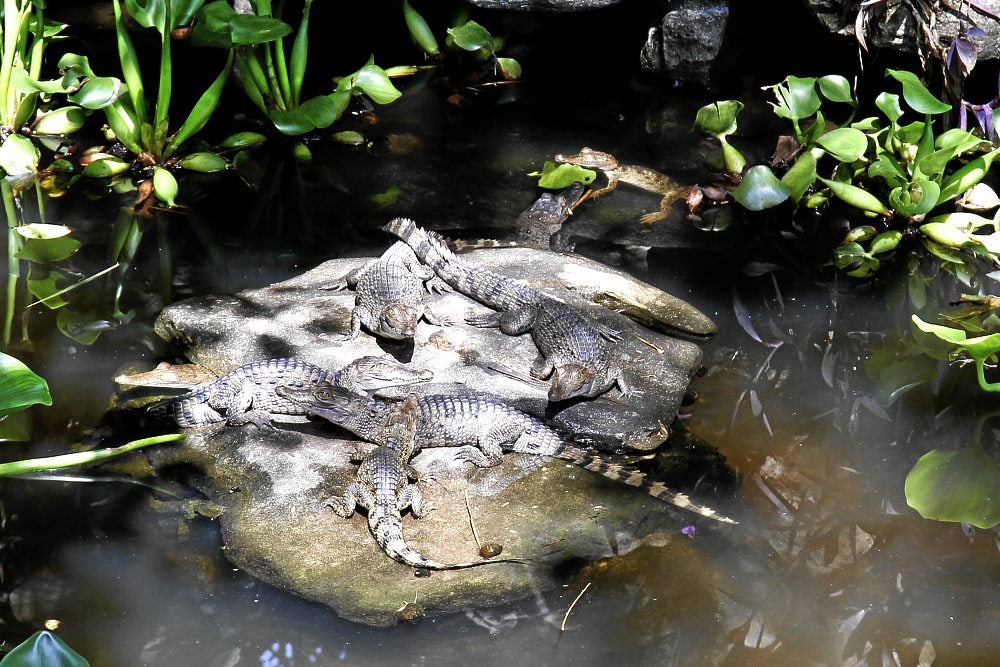 Lacoste heir roughs it up to save the Philippine crocodile

Last Saturday, Michel Lacoste, president and chairman of the iconic lifestyle  brand Lacoste, trekked the Sierra Madre to call attention to the need to save the Philippine crocodile. His milestone effort also marked the launch of Lacoste’s Save the Logo Project in Isabela province.

He was with representatives of Mabuwaya Foundation, a conservation NGO, local government officials, and several biologists and crocodilian experts from around the world.

“Save the Logo” is a joint campaign of Lacoste S.A. and Fonds de Donation Pour la Biodiversite (FDB) to help save endangered species of crocodiles around the world.

Lacoste announced  the launch of its fifth project in Ilagan, Isabela Province, in cooperation with FDB and Mabuwaya Foundation.  Before this, Save the Logo was launched in China, Nepal, the US and Colombia.

Michel Lacoste is the 70-year-old son of Lacoste founder, tennis great Rene Lacoste. He roughed it up and seemed to have enjoyed the physically demanding trip to Isabela.

“This operation deeply involves the local population that would suffer first from the disappearance of the crocodiles,”  Lacoste said. “It gives value to biodiversity by supporting local initiatives, such as rebuilding schools and giving financial support for hospitals.”

The Philippine crocodile (Crocodylus mindorensis) is considered the most endangered crocodile species in the world.  It is indigenous to the Philippines. Hunting and habitat destruction have contributed largely to the dwindling of its numbers.

It is estimated that not more than 100 adult crocodiles remain in the wild, either in the Liguasan Marsh in Mindanao or in Isabela.

The Philippine crocodile is on the Red List of the International Union for the Conservation of Nature (IUCN). According to Mabuwaya Foundation project director Merlijn van Weerd, “it is in danger of being extinct within 10 years if nothing is done to save it.”

The bukarot, as the local community  calls it, is one of the smaller species of crocodiles. Unlike the saltwater crocodile, it can grow to a maximum length of only  three meters or nine feet. Lolong, the giant crocodile caught in Agusan in 2011, measures 20 ft three inches.

A program called “Cash for Communities Conserving Crocs” was also introduced. It aims to mobilize the  communities in Northern Sierra Madre to protect and conserve the Philippine crocodile.

In return, communities will receive P1,000 for every crocodile found in the wild.  The crocodiles will be counted annually by representatives of the Department of Environment and Natural Resources (DENR) and Mabuwaya Foundation.

Last Saturday’s event started with a mini-summit for conservationists from around the world.

The highlight of the two-day event was the release of 12 juvenile crocodiles raised at the Mabuwaya Foundation rearing station.

But just as exciting was the trip to Dunoy Lake. Participants  traveled two hours on a six-by-six truck from San Mariano, where the rearing station was located.

The convoy had to cross a river. Had we not been riding the trucks, we would have  drifted with the current.  Surprisingly, everybody, including Lacoste himself, enjoyed the rough trip.

We reached the campsite of Mabuwaya Foundation around noon, and lunch was served the weary travelers.

The menu included pinakbet, kaldereta and sinigang na baboy, a grand buffet, considering what we just went through and where we were. The humidity and scorching heat left us all very hungry. Lacoste  dove right in with the rest of us, almost like a boodle fight.

After lunch, on a bamboo raft, we  crossed another river, then did a  20-minute trek across cornfields and jungle before finally reaching Dunoy Lake.

The ceremony took almost an hour, in extreme humidity, before we  headed back to the campsite for our trip back to the rearing station in San Mariano.

All throughout, the strength and fitness of the Frenchman was admirable, as he  enjoyed the view and took pictures along the way.

At the end of the day, the 70-year-old president of Lacoste, one of the most recognizable brands in the world, smiled with satisfaction.

He told the group—“It is all about giving back to the crocodile who has done so much for us.” He is referring, of course, to the renowned logo of Lacoste.

Save the Logo’s next project might be in Africa. 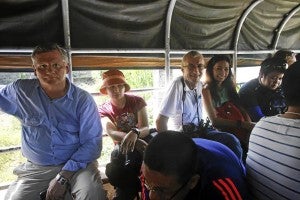 Mabuwaya Foundation derives its name from the Filipino words “mabuhay” and “buwaya.” Loosely translated, it means “long live the crocodile.”

Established in 2003, it is an NGO based in Isabela, committed to the conservation of the Philippine crocodile.  Its main efforts are concentrated on educating people on why the crocodile is “something to be proud of,” and how unsustainable fishing methods threaten both the animal and its environment.

Part of that education involves students from the local Isabela State University,  whose work with the NGO is tied to the school curriculum.

Activities range from creating communication materials to be used in educating the  people on crocodile protection, to actual caring for the crocs.

For more information about the Philippine crocodile, contact Mabuwaya Foundation at [email protected]; tel. +63(78) 6228001.  Lacoste is exclusively distributed in the Philippines by Stores Specialists, Inc.