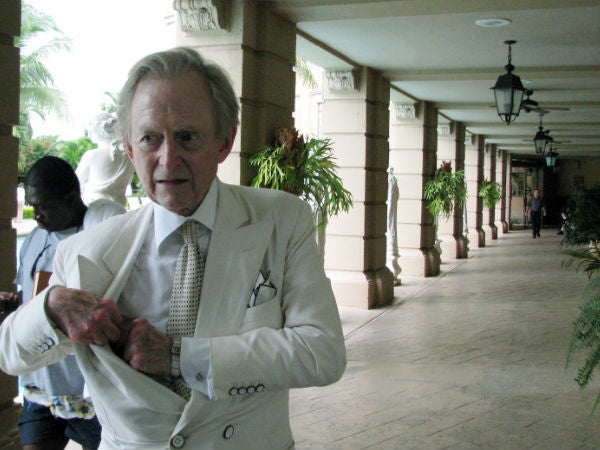 TAMED TOM. In this Oct. 13, 2008 photo provided by Oscar Corral, writer Tom Wolfe is shown in Miami, Fla. For decades master journalist turned novelist, Tom Wolfe has quietly moved through the U.S., soaking up the lives of the rich and poor for his outrageous, yet spot-on tales of American excess. Wolfe's latest work, a much anticipated novel set in Miami, will be released in October, 2012. Wolfe allowed Miami filmmaker Oscar Corral to film him doing research for his novel in Miami. The result is the film "Bloodlines". (AP Photo/Oscar Corral) (AP Photo/Oscar Corral)

MIAMI — Oscar Corral thought someone was yanking his chain the day the phone rang at The Miami Herald newsroom and a soft-spoken voice with just a hint of southern drawl said: “Oscar Corral, this is Tom Wolfe.”

That would be master journalist-turned-novelist Tom Wolfe.

For decades Wolfe had traversed the country in his trademark white suit and fedora, sending up the idiosyncrasies of rich and poor in novels like the New York City-based “The Bonfire of the Vanities,” and “A Man in Full,” set in Atlanta. Now the satirist had his sights on Miami, and he wanted then-reporter Corral’s help.

Over the course of several years beginning in 2008, Corral became a tour guide and translator for Wolfe, taking the famed author from Miami’s raucous Columbus Day Regatta to Little Haiti’s Santeria shops. With Wolfe’s approval, Corral began filming their escapades. The result is the documentary “Blood Lines,” which follows Wolfe as he researches his latest novel to be released this October.

Wolfe told The Associated Press he came to Miami to write a book about immigration: “Not how people get in, but how they get along with one another, and sometimes how they don’t.”

The book, “Back to Blood,” promises to be a “Bonfire”-like take on Miami, with Wolfe’s familiar themes of class, race, family, corruption and of course sex. Among the characters are a Cuban-American nurse and cop, a randy, sex doctor and a journalist on the trail of a Russian-mob-comes-to-Miami story.

The documentary — Corral’s first — is both an ode to the reclusive literary giant and a voyage through the best and worst of wacky Miami.

“It was like hanging out with Yoda,” said Corral of accompanying Wolfe on more than half a dozen trips to Miami.

“After the first trip, I thought to myself, ‘I am watching literary history unfold,'” he said. “Tom Wolfe is pounding the pavement as he has throughout his career… and it’s a great story for anyone about how good writing comes to life.”

Florida-based writer Carl Hiaasen, of whom Wolfe is a fan, also frequently takes aim at the city’s peculiarities, once claiming certain events were so impossible to believe, they were, “beyond Tom Wolfe.”

Wolfe calls the city and its surroundings remarkable.

“Miami is the only city in the world where people from another country and another culture have taken over though the ballot box. And it’s all happened in slightly over one generation,” he told the AP.

He said Corral introduced him to areas he had no idea about.

“Oscar will go anywhere and ask anybody anything, which is one of the main keys of being a good reporter,” he said, adding Corral also instinctively knew when to turn off the camera so as not to interfere with an interview.

When Wolfe first arrived in Miami, he knew little about the grittier aspects of life in the Magic City, or about how Cuban immigrants no longer came to Little Havana but now flocked to the suburbs of Hialeah, which lays a major role in the book. Once famous for its racetrack, the city is now a mix of mini-mansions on undersized lots and one-bedroom, concrete homes where newly arrived Cubans cram together.

Corral says he had long thought Miami would be the ideal setting for a book by Wolfe, whose past work also includes nonfiction like “The Right Stuff,” and “The Electric Kool-Aid Acid Test.”

“It’s almost unreal to outsiders. It might seem preposterous, but it’s real,” he said.

Corral, who is a Cuban-American, should know. He received death threats, and his family was forced to leave their home for two months after he wrote a 2006 expose about fellow reporters who were also getting paid by the federal government for their work for the U.S.-backed Marti broadcasts. The broadcasts are beamed into Cuba and often take aim at the Cuban government.

When Corral heard about Wolfe’s desire to write about Miami, he took a chance and wrote him a letter, including the experience. That led to the phone call.

Corral says it wasn’t easy filming the sometimes elusive Wolfe, who would pop into town at a moment’s notice or fly in and not call at all. He hopes some of Wolfe’s techniques come through in the film.

“He’s a journalist at heart. He listens. He wants to know your position, and why you take it. He is the master at getting people to reveal themselves,” Corral said.

Corral plans to release the film, now in post-production, in time with for the book’s expected October release date. He aims to provide a new glimpse into his beloved home town, and he hopes to attract a new generation of multimedia enthusiasts to his literary idol.